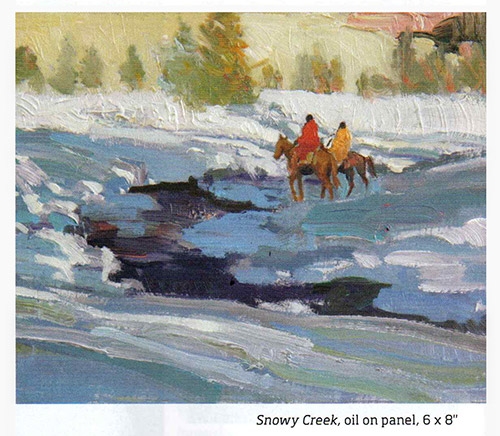 "My work has really been headed more and more into the abstract, but also in directions that are more colorful. I'm certainly not an abstract artist by any means, but I'm using abstract shapes, more decorative shapes, while I go back and forth between realism, while I push my subjects,” he says from his studio. “I’ve always been influenced by the Taos Founders, whether it's [Ernest L.] Blumenschein or Herbert Dunton, as well as the modernists they were influenced by. They were focused on portraying a realistic subject matter, but pushing it as close as they could to abstraction.” Livingston’s new works include Aqua Sky, a scene of a cowboy atop a horse in a stand of aspen trees that are turning with the season, their orange and red leaves standing in subtle contrast to the white bark of the trunks. The artist has lived in Western—rich areas, from Oklahoma to Colorado, but he doesn't see himself forever linked to the myth of the American cowboy. ’’I’m not that kind of Westerner,” he says. ’’I think it goes back to a more romantic time for me, like the paintings of Frederic Remington and N.C. Wyeth. They were great storytellers.”

He continues, “For Aqua Sky, I was really inspired by my home here in Idaho. I get to see the aspens and cottonwoods right out my window. You see leaf after leaf after leaf, and eventually your eye starts to simplify what you’re seeing because it gets visually confusing. The leaves just turn into these big shapes of color,” he says. ’’I wear glasses when I paint so sometimes I'll take off my glasses and look at the painting and it really lets me focus on the shapes. I love this idea of positive and negative shapes - the leaves and trees being the positive shapes, and the spaces between the leaves and trees being the negative shapes. Once you work all that out, the painting becomes a design problem that I get to work out and experiment on.”

Other works in the show include a still life Kachina in Blue, and several scenes of riders in various landscapes, including Snowy Creek and Midday Ride. In addition to large works, Livingston also wanted to have a wall of small works, some measuring just 6 by 8 inches. “It’s fun to see a wide variety of imagery all together like that in a small format,” he adds. "And these aren’t studies. They’re fully finished small works, which can be just as difficult to finish as the big ones, simply because there is less space on the painting, and those small brushstrokes have to mean more than the big ones do.”

Livingston’s new show of abstract—inspired landscapes and figures will be on view through January 12, 2018. 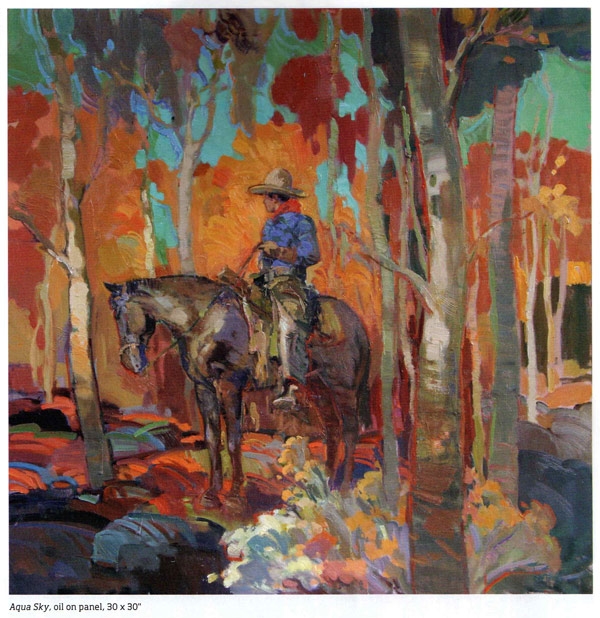