Step into the enthralling worlds of Francis Livingston's imagination

“There was a lot of doubt when I started working out the composition,” Francis Livingston confides of this new direction for his work, represented by the 60-by-60-inch oil Rush Hour.  "I worried that people were going to think I’m nuts. And then I thought, well, people can make up their own stories.” 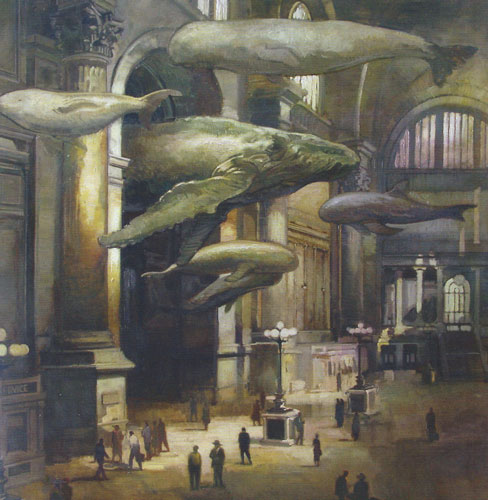 Commuters clad in shades of gray and brown trudge through cathedral-like Penn Station, an architectural landmark of New York City's Gilded Age that was demolished in 1963. Overhead, seemingly unnoticed, whales big and small glide through the lofty spaced, which once rivaled St. Peter's Basilica in Rome. What, exactly, is going on here? A dream? A fantasy world? An alternate reality?

For Livingston, any particular explanation was beside the point. What excited him most was the opportunity to capture the somber mood of a long-gone monument; to portray a magnificent scene in muted colors; and, perhaps, to pique viewers’ imaginations with a speculative nudge akin to, “Wow, wouldn’t it be great if ...?” You might label the overall effect a hybrid style called retro-futuristic surrealism. “Yes, that’s a perfect way to frame it,” says Livingston enthusiastically. “It gets back to the painting’s narrative quality. There’s a bit of a story there. People can get absorbed with it.” “Absorbing” is another apt descriptor for Livingston’s works. Painting after painting draws viewers in, inviting them to linger, to wonder, to explore worlds seemingly suspended in time.

That irrestible narrative thread inherent in Livingston’s paintings makes perfect sense when you consider his boy­hood passion for comic books and comic strips. Born 58 years ago in the Four Corners town of Cortez, CO, then raised for a few years in the eastern desert of Southern California before his family moved to Edmond, OK, for his grade- and high-school years, he steeped himself in what was, if not the so-called Golden Age of comics, at least its Silver Age. “My early favorites,” he says, “included all the Donald Duck tales, great adventure stories wonderfully drawn by Carl Barks.” He also fondly recalls “the most beautifully drawn figures and knights and castles” of the Prince Valiant strips. And the early-1960s “emergence of the Marvel characters like Spider-Man and Daredevil,” featuring the work of masters like Steve Ditko and Wally Wood, thrilled him. “I copied those religiously, trying to mimic their styles.”

So, not surprisingly, he entered Denver’s Rocky Mountain College of Art & Design, an institution founded by Philip Steele, an artist who had studied at New York’s Art Students League under figurative artist George Bridgman, himself an erswhile ghost-illustrator for a popular Sunday action/adventure comic strip called Captain Easy. “So I thought, maybe I can learn some things about comics in this school,” Livingston remembers. What Livingston got during the two-year course was “a fairly general, all-around commercial artist’s training.” Upon graduating, he quickly discovered that “the call for illustrators in Denver was not that great, and, besides, I didn’t really have much of a portfolio.” So he decided to continue his education even more seriously.

In 1975, he entered the four-year illustration program at the prestigious Academy of Art College in San Francisco (now the Academy of Art University). “It was an eye- opener,” he says. “I’d never experienced that kind of intensity in anything I’d ever done before. A lot of our instructors were professional artists who would bring in their own works for publishers and poster art. And we students were a very competitive group who would stay up all night working on our assignments, pushing each other to raise each other’s level.”

Straight out of the Academy and living in San Francisco, Livingston began getting assignments. He drew pen-and-ink illustrations for local magazines. Textbook publishers hired him to paint historical scenes of events ranging from the Revolutionary War to the exploration of Antarctica. He developed a reputation as one of the few illustrators in the city specializing in beautifully realized oil paintings. He secured agents to represent him on both coasts, getting still more plum assignments including the covers of major corporate brochures and annual reports. “It was a quick jump-start,” he says.

His next decade and a half as one of the nation’s top illustrators helped Livingston develop a serious, driven, deadline-oriented work ethic that still serves him well. “Early on,” he says, “I stopped comparing myself to my friends and started challenging myself to put everything into this job, to do work as good as the guys who were, and are, top illustrators” - including such greats as James McNeill Whistler and John Singer Sargent, classic Old West illustrators like Charles M. Russell and Frederic Remington, and prominent early 20th-century figures such as Norman Rockwell and N.C. Wyeth. It’s no coincidence that all those illustrators also came to be admired as major painters. Early in his own booming career, Livingston found that people wanted to collect his work. “Often,” he says, “the client asked to buy the original, or an author wanted the painting I did for a book cover. All of a sudden, the fee I earned would double.”

He also sometimes painted for his own pleasure. One day in the early 1990s, he mentioned to client Thomas Reynolds, then an editor at California Lawyer magazine, that he had painted some atmospheric scenes of the nearby old coastal town of Santa Cruz. “He came to my studio, and he wanted to buy them,” Livingston says. “But I didn’t want to sell them.” Not long after, Reynolds phoned the artist. “He said, ‘Francis, I’m opening a gallery and want to give you a one-man show. And then I can buy your art!’”

That gave Livingston the push he needed to produce his first gallery works. He was further inspired by a visit to a New York show featuring haunting watercolors of Coney Island by David Levine, an illustrator best known for his pen-and-ink caricatures skewering writers, politicians, and other noteworthies in The New York Review of Books. “I was blown away by the kind of grittiness you might see from Ashcan School painters like George Bellows or John Sloan,” he says. “They were just what I had in my own head.” In 1994, Livingston’s first show of moody Santa Cruz oils at the new Thomas Reynolds Gallery in San Francisco won him positive recognition. It also propelled him into representation by still more galleries nationwide, he says. One of them, Medicine Man Gallery in Santa Fe and Tucson, encouraged him to create a continuing se­ries of Southwestern-themed paintings.

Soon after his San Francisco show, Livingston moved to rural Bellevue, ID, near Sun Valley, with fellow illustrator Sue Rother, his wife and the mother of their two now-grown sons. He finds it the ideal setting for this new career phase, complete with a separate, garage-sized studio adjoining their house. “It has north light, lots of windows, and good ventilation,” he says. “So it almost feels like I’m painting outdoors.” 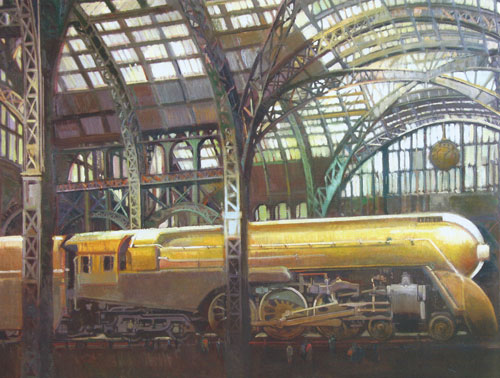 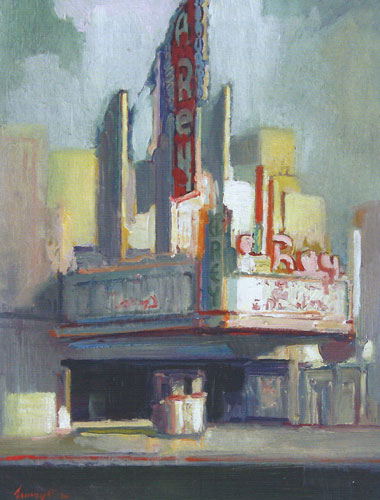 After so many years spent honing his skills through the daily grind, Livingston describes his current painting process as “very intuitive.” For works like El Rey, a depiction of a revered Art Deco theater on L.A.’s Wilshire Boulevard, he seeks inspiration in his own photos or archive images of urban architecture. After working out a simple schematic composition, he projects his reference shots onto birch panels sealed with white gesso, sketching them in with a soft graphite pencil. “Projecting is faster than the tra­ditional method of scaling up the image with a grid,” he explains. “But a projector is just a tool. You can’t really use it unless you know how to draw first.”

Then, after he tones the surface with a neutral color, the actual painting begins. “I work from a middle tone, then go a little bit darker and a little bit lighter, and I don’t lay in the darkest or lightest colors until the very end,” he says. Despite the narrative qualities the finished work might possess, he says, “I stray from my reference materials pretty quickly. I let the painting start dictating how it winds up.” Eschewing tight realism, he adds, “If I see too much detail, or it starts looking too photographic. I’ll scrape the paint with old credit cards or a piece of cardboard, or throw on some turpentine to let it drip. Doing that loosens me up psychologically and gives me little textures and surprises.”                                                       Francis Livingston, El Rey, oil, 20"x16"

Catch Livingston at an opening for one of his shows, and you might well see him using his outstretched forefingers and thumbs as cropping devices to demon­strate how any given area on one of his paintings is more abstract than realistic. “I look at everything in an abstract way,” he says of his love of painterly surfaces. Taking that love to a logical extreme, he has even begun to produce abstract works. For example, for an upcoming show at Medicine Man Gallery in Santa Fe, his paintings incorporate scraps and threads of old, deteriorated Navajo blankets sent to him by Sublette. “The fabric is very much part of the abstract paintings, which are a lot of fun to do,” says Livingston. “There’s a complete freedom. All I'm worried about are gut-level art basics like design, movement, color, and balance.” 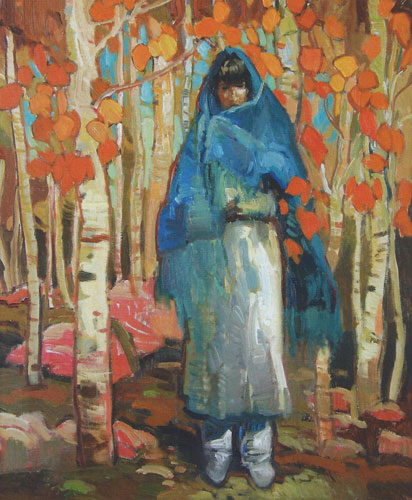 Today, Livingston clearly enjoys his creative freedom as a full-time fine artist. Still seeking challenges, he ponders new areas of exploration. “I love printmaking and have a press that reminds me that I need to do monotypes. I’d really like to get into sculpture. I’d like to do some little watercolors and stick them into a show. It isn’t a matter of the medium. It’s really all about what is within the artist.” Just thinking about it all makes him laugh, and Livingston offers a comment that aptly sums up not just his range of options but also, unwittingly, the imaginative impact his paintings have on viewers: “It opens the floodgates to all kinds of possibilities.”