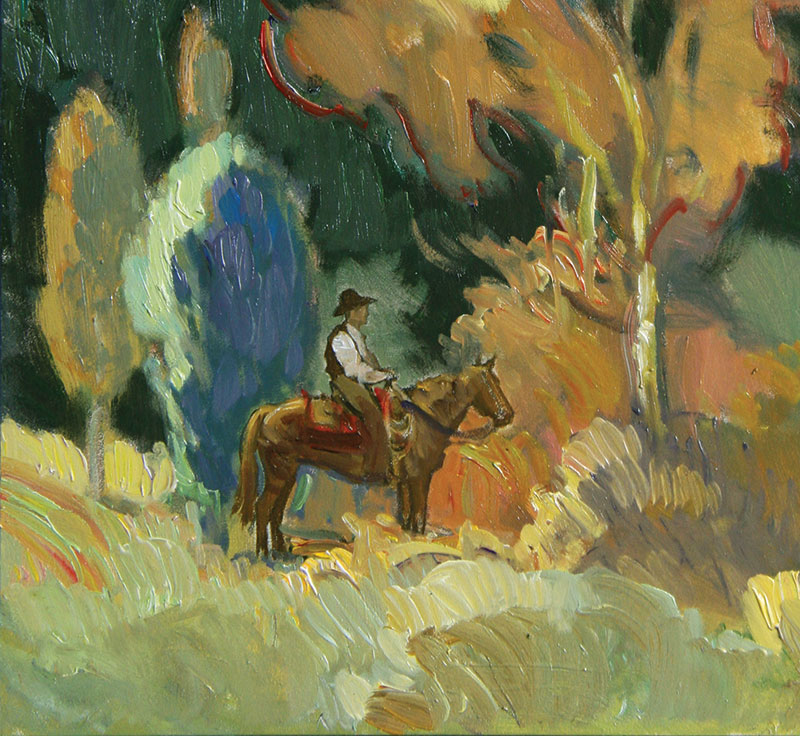 When Francis Livingston was growing up in Oklahoma, he and his family visited the newly opened National Cowboy & Western Heritage Museum, then known as the Cowboy Hall of Fame. "All of a sudden I was exposed to N.C. Wyeth, Remington, and all the Taos Founders," says Livingston. "There was the best of everything. I kept going back because there was very little of this kind of art in other museums when I was going through high school."

He was born in Cortez, Colorado, and spent a lot of time in the Four Corners region of Colorado, Utah, Arizona, and New Mexico. "I felt I had a real connection to that area." His career as an illustrator led him in a different direction until he was hired to illustrate an article on The Bozeman Trail for Smithsonian Magazine. When Mark Sublette saw the article, he asked Livingston to join his gallery. "That was the only historical Western genre work I had ever done and I'd always wanted to do more," recalls Sublette.

Livingston's latest Southwestern paintings are now on view at Sublette's Medicine Man Gallery in Santa Fe. "I like the colors of the landscape and the shapes of the landscape in Northern New Mexico and the architecture of Santa Fe," he states. "My Southwest paintings tie in with my other work historically. Some of the scenes are imagined but it's always something that could have happened."

"Some people liken these paintings to the Taos Founders. Those guys are my heroes, so that's a great compliment." Although his admiration for Blumenschein, Higgins, Fechin, and the other Taos painters may have informed his paintings, Livingston's oil pieces have a life of their own. 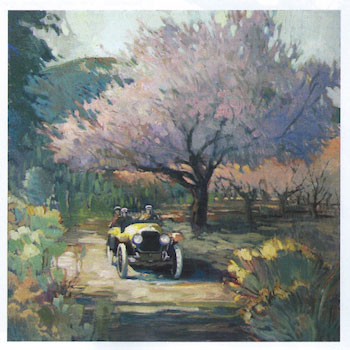 His love of other historical periods and their artifacts, which is more evident in his paintings of other regions, can be seen here in Apricots, with a vintage touring car driving through a spring orchard. In this painting and in Yellow Cottonwood, Livingston's love of paint is apparent as well. "I like thick paint and the idea of brushwork that allows you to see it," he says. "I feel the paint is sculptural. I'm not just rendering an image. The paint gives another layer of interest." In Yellow Cottonwood, Livingston distances himself from his predecessors by flattening the sense of depth with an outline of red around the yellow mass of the cottonwood. "It gives a more contemporary feeling," he explains, "something more graphic from my time as an illustrator. It also refers to the drawing that I begin with and that gets changed as the painting progresses. So, there's history in the work itself."