An unlikely alliance and friendship: the lost pottery tiles of Awa Tsireh and Paul Saint-Gaudens

By Mark Sublette and Michael Horsley 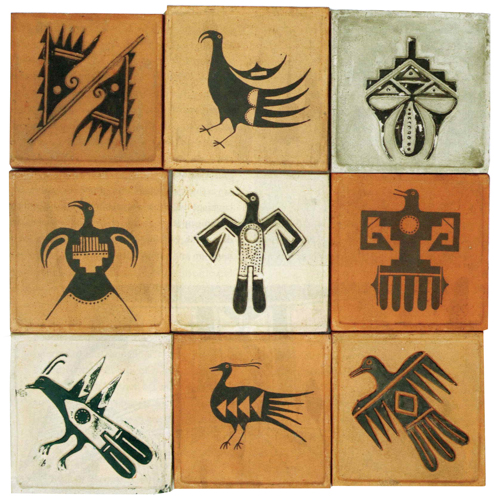 One of the most exciting moments in any art dealer's career is discovering new, important works of art. Usually, the find occurs in the form of a single unknown piece that is fresh to the market; however, on rare occasions when the stars align, the discovery can be in the form of a forgotten cache of artwork. If one is indeed fortunate, the find can also provide new insights into an artist's body of work and shed light by adding to their catalog raisonne; the lost pottery tiles of Awa Tsireh are one such find. In late 2020, during a time of great stress for the world with a pandemic raging, a significant body of long-ago stored pottery tiles by two well­ known artists of divergent backgrounds emerged from a dusty Colorado basement. This convergence of artistic abilities was facilitated by an astute Denver art patron nearly a hundred years ago. The players were a renowned San Ildefonso artisan and an East Coast classically trained ceramics instructor who, along with a roofing tile manufacturer, connected through a series of events that would make for an interesting novel. This story's characters are not imagined, but rather actual historical figures: Awa Tsireh, Paul Saint­ Gaudens and George P. Heinz.

The unlikely story begins with Awa Tsireh, Alfonso Roybal (1898-1955), also known as Cattail Bird, a well­known San Ildefonso artist. Awa Tsireh's grandmother, Dominguita Pino Martinez, was known for her large polychrome and red-handled jars. His mother was the noted potter Alfonsita Martinez and his father, Juan Estaba Roybal, was the nephew of famed pueblo potter Cresencio Martinez. Awa Tsireh, a student of Elizabeth Willis DeHuff, was one of the earliest fine arts painters from San Ildefonso Pueblo which lies 22 miles north of Santa Fe, the state capital of New Mexico and the Southwest's center for artistic invention in the first quarter of the 20th century. 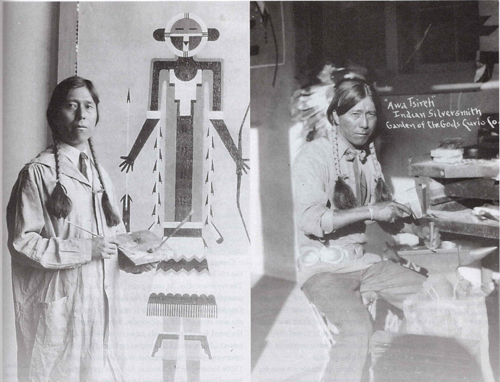 One of the better-known Santa Fe artists, William Penhallow Henderson, painted Awa Tsireh's portrait in 1917. The portrait is now housed in the New Mexico Museum of Art collection, created the same year the museum opened. Henderson's wife, the poet Alice Corbin Henderson, helped the new fledgling art museum in 1918 mount one of their inaugural openings that included paintings by famed Western artist Maynard Dixon. Corbin was a patron of Awa Tsireh, having collected his paintings.

By the 1920s, Awa Tsireh had made a name for himself as an artist, having exhibited in several group shows, including one in 1926 with Julian Martinez, another famous pueblo potter and painter, in a two­ person exhibit at the Museum of New Mexico. Awa Tsireh's sister, Santana, married Maria and Julian's oldest son Adam. She worked with Maria for a dozen years and was widely considered a master potter. It was clear that Awa Tsireh had a deep well of pottery influences that inspired him. Although he was best known for paintings collected by art patrons, these pottery forms shed new light upon Awa Tsireh's talent, and this is where the story unfolds. 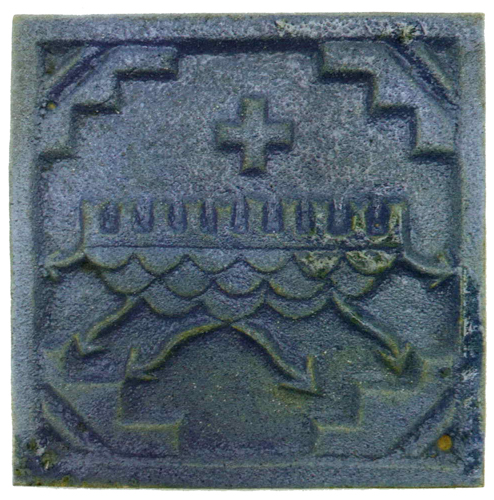 In the 1920s, Awa Tsireh was given studio space in the Palace of the Governors by Dr. Edgar Lee Hewett to focus on his paintings. During this time, several other artists also had studios there, which would have allowed Awa Tsireh to meet and work with artists from various backgrounds. Hewett was an important figure in the Southwest who facilitated passing the Antiquities Act of 1906 to preserve atavistic pueblo dwellings and became the first director of the Museum of New Mexico and the School of American Research. Hewett was also instrumental in working with Maria and Julian Martinez by promoting their newly invented black-on-black pottery.

George P. Heinz (18 72-1932) started his career in the tile business in Denver, Colorado, as a Ludowici Tile representative. At some point, Heinz decided to manufacture tiles and started the Heinz Roofing Tile Company in 1912, predominately using local clay from the area around Golden, Colorado. Heinz recognized the need for tiles not only to be durable but also artistic. He worked diligently to produce tiles with colors and glazes that were not available in the early 1900s focusing on the boom in tile roofs on Spanish Revival houses and Tudor style homes. Not only did he produce tiles on a mass scale, but the company also had five fully operational kilns, which consumed 24 tons of clay daily in 1927. Heinz focused on challenging roofing projects where tiles had to be custom-made for the architecture. His artistic interest and civic­mindedness led him to become a trustee of the Denver Art Museum (the Chappell House) starting in 1925 until 1931. 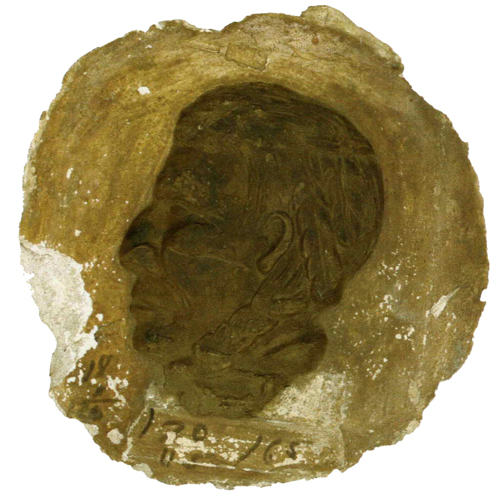 One of the first formal art schools in Santa Fe, New Mexico, was sponsored by the Chappell House and operated there in 1925, 1926 and 1927, and then again in the early 1930s. Saint-Gaudens was one of the ceramic instructors who went to Santa Fe in 1927 and this temporary move to Santa Fe allowed him to rejoin his friend and early mentor, Frank Applegate. Applegate, who moved to Santa Fe in 1921 to paint and study Native American pottery and pottery­ making methods, also taught at the Chappell House Santa Fe school. Saint-Gaudens had a keen interest in other cultures and focused much of his research and works on early Mayan designs. While in Denver, Saint-Gaudens produced a number of tiles, presumably for or with Heinz, signed with his "GSTG" initials on the front (some examples have Heinz's stamp on the back). These tiles would have been handmade by Saint­Gaudens while using a kiln at Heinz's roofing tile plant on the north end of downtown Denver. Saint-Gaudens spent his artistic career focusing on handmade pottery and shied away from commercial mass production. The tiles produced would have been made sometime between Saint-Gaudens's arrival in Denver in early 1927 and his departure in 1929.

In the late 1920s, Awa Tsireh and Saint-Gaudens presumably met in Santa Fe, most likely through Hewlett, who was keenly interested in pueblo pottery. With his interest in both Mayan and Native American designs, Saint-Gaudens would have had a lot in common with Awa Tsireh; both were in their - late 20s. Saint-Gaudens had spent a fair amount of time studying traditional pottery-making techniques, primarily the type done in Colonial America. Awa Tsireh had  a  deep understanding, appreciation, and acumen for Pueblo pottery growing up, helping his grandmother,  mother  and sister, in the  process of making pueblo pottery,  a  family  affair.  From this meeting in Santa Fe, Awa Tsireh may have accompanied Saint-Gaudens to Denver to design pottery tiles at Heinz's tile factory in late 1927 or 1928 (possibly as late as 1929). One of the pieces found within this tile collection was an earthenware relief signed and dated by Saint-Gaudens 1928-assumed tobe a portrait of Awa Tsireh. Looking at the timeline, 1928 would have been the most likely year that Awa Tsireh would have been in Denver creating tiles, as tiles bearing Awa Tsireh's design work were incorporated into building projects by 1929. 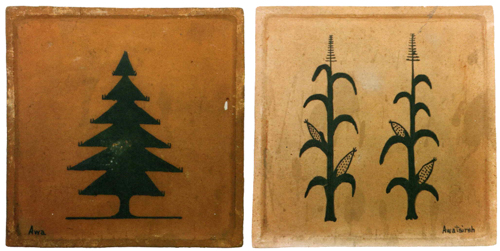 The Awa Tsireh tiles in this collection contain examples that were hand-painted, many signed, as well as unsigned terra-cotta tiles often having the "Geo P Heinz" impressed stamp on the back. It is important to note there is a clear stylistic difference between the tiles made by Saint-Gaudens at Heinz's facility and those attributed to Awa Tsireh. The Saint­Gauden tiles, most of which are signed, are larger and show a greater amount of relief work and Mayan influence. It is unknown if the Southwestern tiles were a collaborative effort between Saint-Gaudens and Awa Tsireh; no doubt they would have appreciated each other's pottery-making acumen.

The Awa Tsireh tiles fall into three categories: tiles that were hand-painted with scenes, many signed by Awa Tsireh; tiles formed using his animal and bird designs; and tiles formed using his abstract and geometric designs. The hand-painted tiles include examples of animals, birds, musical instruments, and abstract/geometric designs. The terra-cotta tiles contain designs used in the watercolors and silver work by Awa Tsireh. One of the largest tiles in the collection depicts a turkey with a sun behind it. An original painting by Awa Tsireh with this scene was donated to the Denver Art Museum in 1932 by Anne Evans and Mary Kent Wallace. The turkey, without the sun, was also used as an illustration in the 1927 book Tewa Firelight Tales by Ahlee James and illustrator Awa Tsireh. 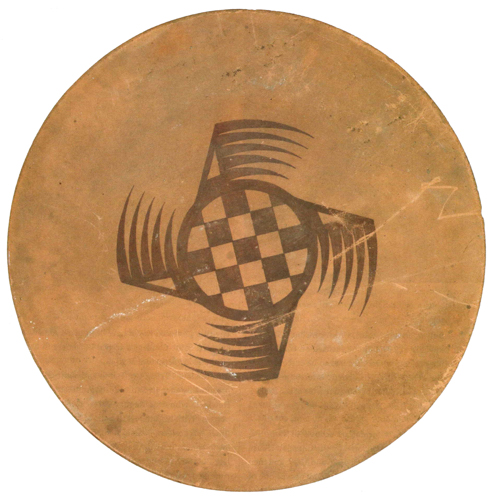 In many ways, these tiles seemingly relate more to the drawings and paintings that Awa Tsireh created in the 1920s than to the silver and copper jewelry he would create in the 1930s and '40s while working at the Garden of the Gods Trading Post. One would think the tiles would have been instructive for him in creating "simple" designs that would be visually striking. It is easy to see how the whimsy he instilled in the animal designs in some of the tiles, especially the skunks and possums, carried over to animals made in silver. 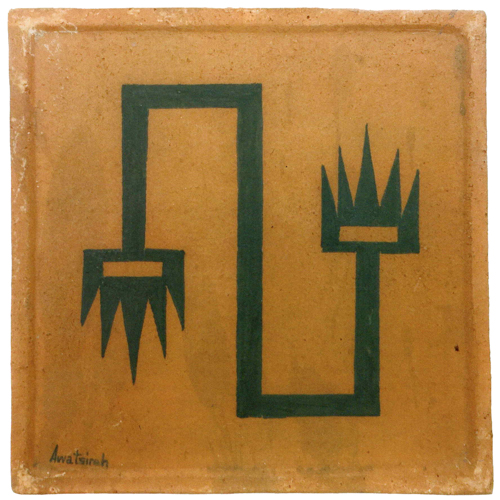 Five examples of Awa Tsireh tiles  found  in this collection are also in the Garden of the Gods Trading Post in Manitou Springs, Colorado, the tiles incorporated into the original 1929 construction. The tiles were set in a fireplace at the trading post and painted at some point, perhaps by the owner Charles Stausenback, who painted Native American-themed murals on the same fireplace. How exactly Stausenback came by these tiles is unknown; a few years later, Awa Tsireh became a summer fixture at the trading post for nearly two decades, producing silverwork and watercolors.

Interestingly, an article in the April 24, 1927, edition of the Rocky Mountain  News shows a group of Saint-Gaudens tiles, presumably fired at the Heinz facility, all Mayan in design (the article referenced the difficulty in firing such  pieces). In the late spring of 1 928 , there was an exhibition in Atlanta, Georgia, of Saint-Gauden family art. From May 15 of that year, an article from The Atlanta Constitution notes pieces by Louis Saint-Gaudens, Annetta Saint-Gaudens, and that "the rest of the exhibition is made up of the art pottery of Paul Saint-Gaudens from the kilns in his Orchard pottery at Cornish N.H. There are several decorative tiles which are copies of Mayan or Aztec tiles." Our research could not find any examples of Southwestern or Native American-style tiles signed by or attributed to Saint-Gaudens. He seemingly focused on Mayan and Aztec designs before, during and after his time in Denver, while Awa Tsireh produced the Native American designs depicted in these tiles. 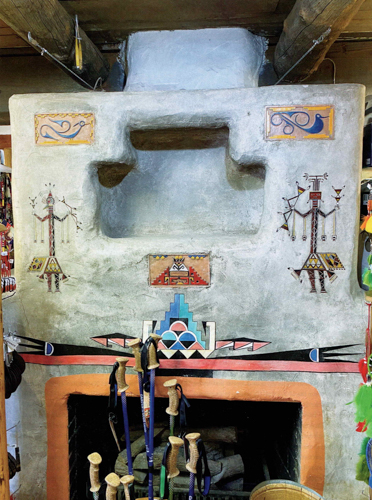 In George Heinz, Awa Tsireh and Paul Saint­ Gaudens not only found a patron with access to the raw materials they needed to create their art but also an individual interested in the creative process. Many artists working in Santa Fe and Taos in the 1920s, whose paintings today sell for hundreds of thousands of dollars if not millions, struggled to make ends meet. They often had to subsidize their income with teaching assignments when they could find them. The idea that Heinz could offer these two artists a place to work, with kilns at the ready, raw clay needed to produce their craft, as well as the ability to pay them for their work, either designing the tiles or paying them after made and sold, would have been a tremendous help for them both. Some of the glazed Awa Tsireh tiles could have come from experimentation with glazes used on roofing tiles or from Saint-Gaudens' knowledge and formulas he brought with him to Denver. 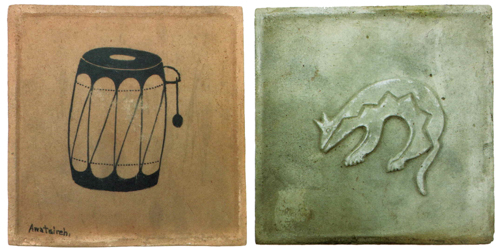 The exact circumstances under which Awa Tsireh, Saint-Gaudens and Heinz met are still unfolding. However, the unique Native American tiles created by this unlikely relationship, rediscovered for the first time in almost a century, are for now returned to the art world. Hopefully, new research into this unique collaboration will continue to percolate to the surface; all great stories need a sequel. 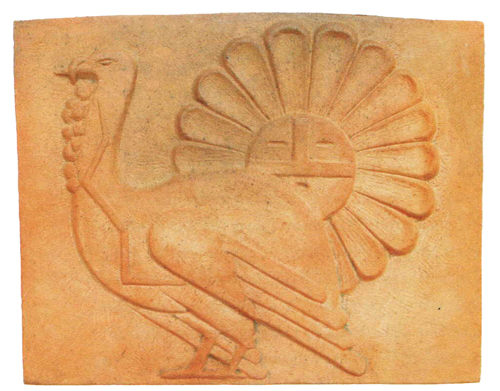