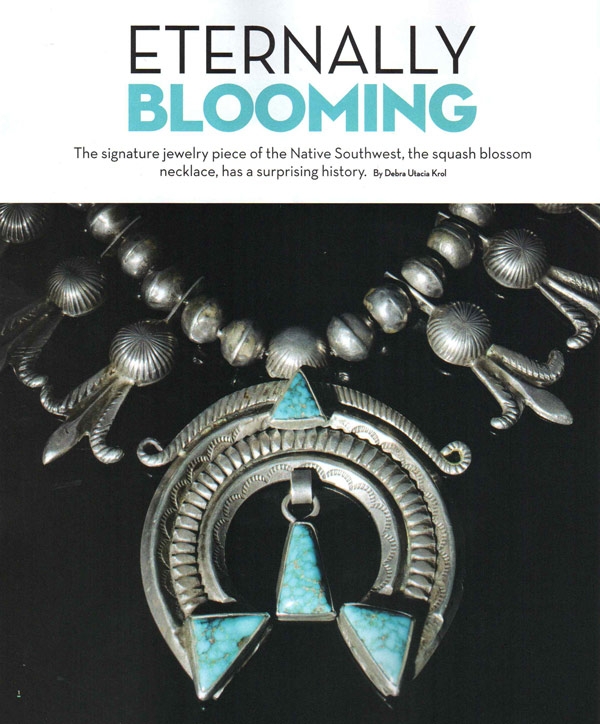 Robert Bauver, author of Masterworks and Eccentricities: Navajo and Pueblo Jewelry and Metalwork 1880 — 1950 (Four Winds Publisher, 2000) and otherbooks about Southwestern Native jewelry, notes thatthe one of the squash blossom’s components, theNaja pendant, dates to Egyptian and Roman times.In the 5th century, the Moors brought the symbol toSpain from Northern Africa during their nearly eight-century occupation. Crafted in silver, the inverted crescent—shaped Naja was centered on the head of ahorse’s bridle, and was said to protect the horse and itsrider from evil. When the Spaniards came to the NorthAmerican continent, they brought horses—and theiraccouterments—with them.

"The horses [and their bridles] were seen by Indians," Bauver says. “Mexican smiths made silver Najas as trade items. These forehead ornaments went from horse bridles to chest decorations on Plains warriors." The crescents can also be seen on mid-19th - century Southern Plains shoulder bags.

Bauver says it was an “easy transition for the Navajos, seeing these bridles and pectorals the Plains people were wearing, to see the Naja as a pendant." However,

Bauver also notes that his studies indicate that Navajos didn’t adopt the full squash blossom necklace form until the 1880s. “I do see some Navajos wearing simple strands of beads with a Naja in the 1870s,” he says. “You have to remember that Navajos had just come out of a prison camp after four years and were extremely poor. It wasn’t until the 1880s when Navajos began working for the railroad that they were paid with silver dollars.” Suddenly, Bauver says, silver was abundant and Navajos could have more jewelry made.

During this period, Navajo metalworking was born. "The Navajo began working in the 1870s with silver, learning from early Mexican silversmiths,” says Mark Sublette of Medicine Man Gallery. "Atsidi Sani was one of the first Navajo silversmiths to learn the craft. He taught his brother, Slender Maker of Silver, who specialized in squash blossom necklaces.” Steve Getzwiller of Nizhoni Ranch Gallery in southern Arizona has an Atsidi Sani headstall in his personal collection as well as one from the Kiowa Tribe of Oklahoma. "Made with German silver, the l860—era double Naja Kiowa headstall served as the inspiration for the Navajo silver headstall,” Getzwiller says.

Turquoise, on the other hand, has been in use by Southwestern people for more than 1,000 years. “Adding turquoise to the squash blossom necklaces was a natural extension of this tradition," says Sublette. Bauver concurs; he says, “With their fascination and reverence for turquoise already in existence, and this wonderful new jewelry form of silver, it was a simple step for one to be incorporated into the other."

Most all experts agree that turquoise didn’t ﬁnd its way into silver jewelry until 1880. “Lorenzo Hubbell had to import Persian turquoise because the demand was so high, and most of the turquoise mines open today [in the Southwest] weren’t open then,” Bauver says. 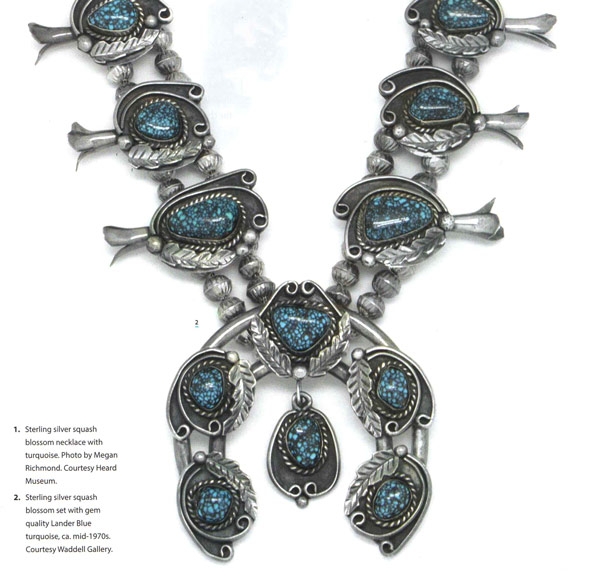 Sometime during this period, Navajos also noticed, and admired, the silver pomegranate ﬂower blossom adornments worn on Spanish men’s shirts, capes and trousers. These resembled images of long-petal blossoms found on petroglyphs in the Southwest. Navajos began incorporating silver pomegranate blossoms into their necklaces around the same time that silver became more available.

“Ingot silver, made from Mexican Pesos, also known as coin silver, or bars of silver was the earliest type of metal used in squash blossom necklaces," says Sublette. “These necklaces have a distinctive weight to the pieces.”

“The earliest examples of squash blossoms are made by Slender Maker of Silver,” continues Sublette. “They have very heavy large squash blossom beads made with ingot silver and small turquoise stones often coming from surface find mines.”

In addition to combining design motifs, new materials and ancestral Navajo culture to create new forms of intriguing jewelry, Slender Maker of Silver also created a jewelry dynasty—the Peshlakai family, which produced many acclaimed jewelers over the next five generations.

The Harvey Company also helped inﬂuence squash blossom necklace design evolution. “Early on, the jewelry Fred Harvey sold in. Harvey Houses along the railroad was pawn jewelry purchased from traders like Hubbell and Sam Cotton,” says Bauver. “He was so successful that he started using buyers,” including Herman Schweitzer. “He noticed that for many of the tourists from the East that the necklaces were too heavy to wear," Bauver says. "So, Schweitzer started to encourage smiths near to the trading posts and hotels to make a lighter-weight silver in a way that would be more attractive to buyers.”

This period, the late 1800s to the 1930s, was a very active time for Navajo and Pueblo jewelers. Sublette says, "Many of the necklaces from the 1930s are of the type referred to as ‘Box Bow’ design and are characteristic of the 1930 to '40 time frame." Sublette adds that better examples of this design would be what the Fred Harvey Company would have on sale.

Not to be forgotten are the Zuni artists, known for their superb lapidary skills. The Zunis were learning silverworking about the same time as Navajos, and they were using some of the same basic designs and techniques in their necklaces. But it wasn’t until the late 1910s and early 1920s that the Zunis started using turquoise in their necklaces, says Bauver.

“Between the 19205 and World War II, Zuni jewelry changed dramatically, with an incredible evolution of design,” says Bauver, "while Navajo jewelry styles, although still of high quality, stayed pretty much the same.” During this period, the Zunis began creating intricate inlay work. 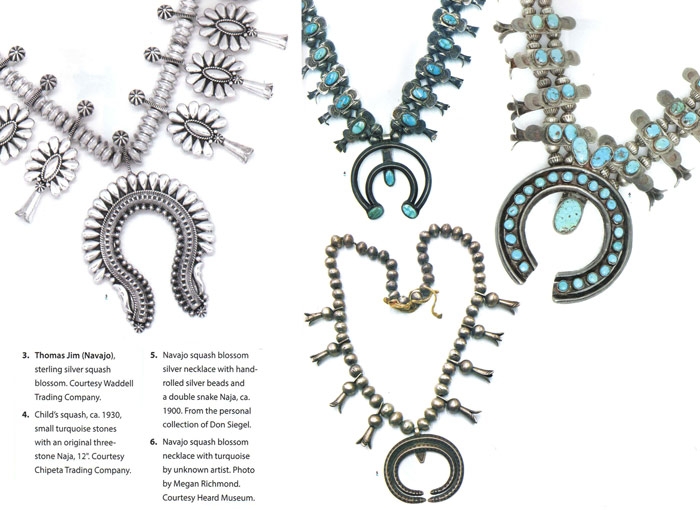 The late 1920s also saw the Zunis developing the famed “petit point” and “needlepoint” styles with ever-smaller, intricately—cut stones being placed into the silver in rings, rows and clusters. “Also, with dealers such as C. G. Wallace, Andrew and Effa Vanderwagen, and Charles Kelsey influencing the jeweler to do fancier work, bringing the artists better tools and better materials, such as more silver and turquoise and even coral, you start to see a fluorescence in Zuni jewelry,” Bauver says.

Wallace started to import Lone Mountain turquoise from Nevada for his jewelers’ use. “This turquoise has a beautiful rust-colored spider web matrix,” says Bauver. “That matrix can be very soft, and the little nuggets of turquoise would sometimes chip out.” So, the clever Zuni jewelers would obtain softer grades of Lone Mountain turquoise, chip the small pieces of turquoise stone out of the matrix, and cut them into little stones. Bauver says that was the advent of the little bracelets; “Zuni artists improved on this process by cutting stones into different shapes, such as the elongated shapes called needlepoint.” Some of the best Zuni artists producing needlepoint jewelry today are women, Bauver says. “They have the better eyesight and the better patience,” he adds.

The necklace style has persisted over the decades. “Squash blossoms have always been popular,” says Sublette, who also posts educational videos on his gallery’s website. "The late 1960s and early 1970s were a boom time for squash blossom necklaces," says Sublette. “It was a gold rush era for all things Native American, with the squash blossoms leading the way.”

Bauver agrees that the form of the squash blossom has maintained its popularity, although contemporary artists like Charles Loloma broke the mold with his designs that veered sharply away from what people considered "Indian” designs. That’s when Indian artists became world artists, he says.

But, like their organic counterpart, these distinctive necklaces experience seasons with greater and lesser popularity. Like the bolo tie, the squash blossom necklace occasionally drops from the public eye, only to rise again like the legendary phoenix.

But, what gets stashed in dresser drawers and jewelry boxes by parents or grandparents often re-emerges when the kids find them. “Today, there has been a significant resurgence in the millennial generation who wear squash blossom necklaces, or in some cases, just the Naja,” says Sublette. “Watching a current television show like The Voice, you will see large numbers of singers in their 20’s wearing what was in vogue during the Summer of Love in 1967.” And that aesthetic includes squash blossoms. “They are very much in style right now,” says Sublette. “We are selling as many necklaces to people in their early 20s and 30s as to any other age group."

Sublette names some of the preeminent squash blossom artists of the 20*‘ century. “Mark Chee, a great Navajo mid—20"‘ —century artist, made wonderful squash blossom necklaces in an older style using heavy gauge silver,” he says. “Della Casa Appa, one of the first Zuni woman silversmiths, made very distinctive necklaces, as did Frank Dishta of Zuni.” Sublette notes that most Navajo artists have attempted to make squash blossom necklaces at some time in their career. 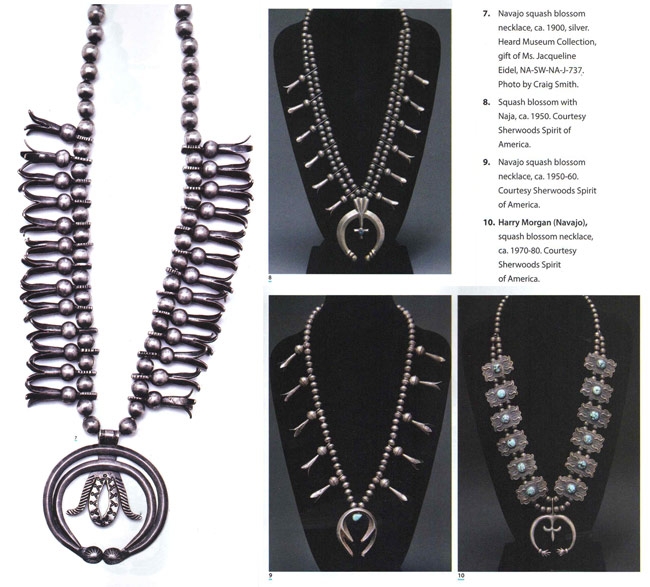 Fans of one of the Southwest’s highest—profile art forms can also collect new versions to add to their collection and tell the ever—evolving history of the squash blossom necklace. “If you attend Indian Market, you will find numerous squash blossoms still being made by contemporary Navajo, Hopi, Zuni and Pueblo artists," says Sublette.

Southwestern Native jewelers are taking the squash blossom in a new direction in the 21“ century while still honoring its historic origins. Jeff DeMent, an emerging Navajo jeweler and metal artist, creates contemporary squash blossom designs using the ancient technique of tufa casting. One DeMent squash blossom necklace replaces the pomegranate blossoms with lighting arrows, a tribute to the Hero Twins of Navajo origin lore as well as harking to his time in the military. “Being a veteran, the lighting arrows are a really strong symbol for me,” DeMent says. Created from sterling silver and high-grade, natural Kingman spider web turquoise, the necklace reflects DeMent’s attention to detail and design esthetic.

Other jewelers working with more contemporary interpretations of the squash blossom include Earl Plummer, whose multiple Naja charm squash blossom necklace is popular with collectors. Ray Tracey creates distinctive Najas, some sporting corn dangling from the midst of the pendant.

Collectors can easily ﬁnd a variety of squash blossom necklaces to suit their personal style while honoring one of the first modern Native art forms.