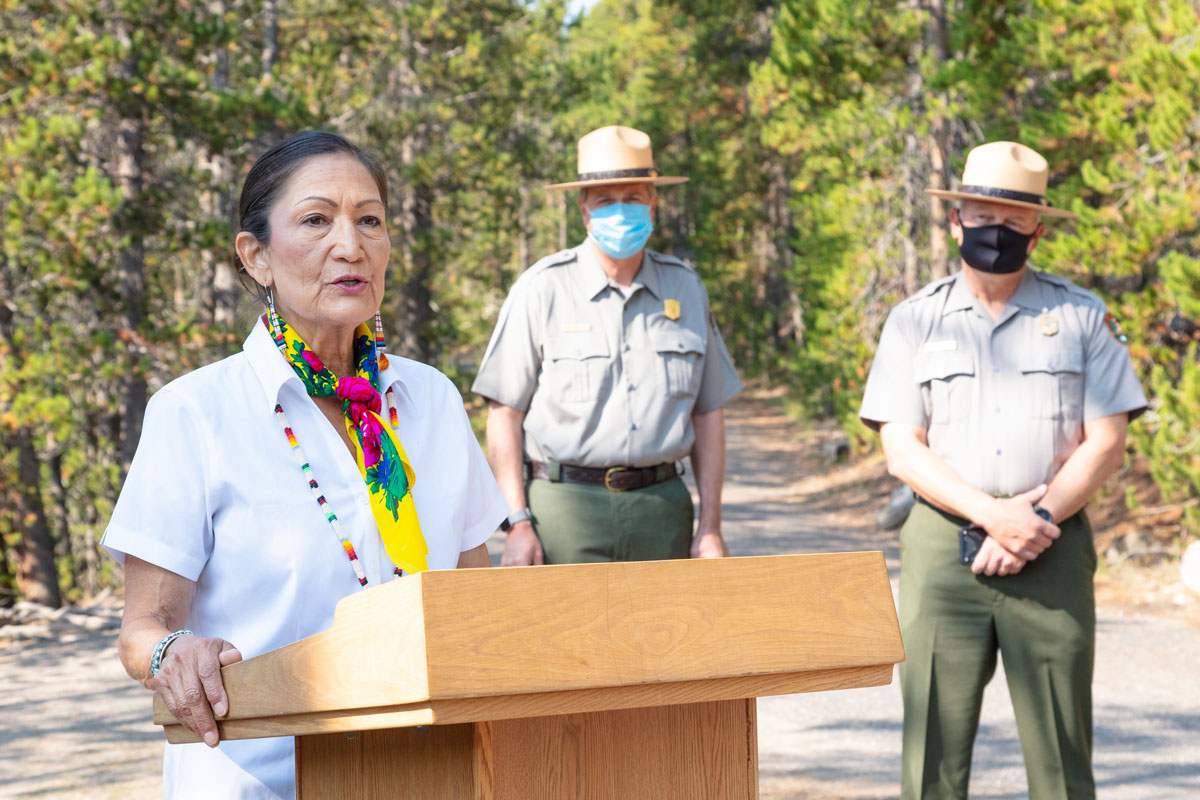 As the American Serengeti, Yellowstone National Park bustles with bison, elk and bear. No place on earth contains more geothermal features such as geysers, mudpots and thermal vents.

Something is missing, though.

Not the tourists who pack the park each summer to admire those animals and Old Faithful, but the park’s Indigenous inhabitants whose persons and history have been scrubbed from both the land at Yellowstone and the storytelling around it.

Shane Doyle (Apsáalooke/Crow) is working to change that.

“We were ethnically cleansed from the beginning,” Doyle said of Yellowstone National Park’s historic treatment of its Indigenous population. “Despite all the archaeology and all the history, there's still very little that we learn when we go to Yellowstone Park about Native people.”

Doyle wants to return Native people and their stories to Yellowstone with the Park’s 150th anniversary in the summer of 2022 providing the perfect opportunity to do so. In June of 2021, he spearheaded a delegation which included representatives from nearly all the tribes in Montana and Wyoming, Park Superintendent Cam Sholly, the National Parks Conservation Association, a nonprofit dedicated to supporting the National Parks, Mountain Time Arts, a regional arts organization, and community partners which met just outside the park to determine the best way to develop a permanent presence for Native people inside the park.

He envisions a teepee village.

“What we're hoping to accomplish with a teepee village is a presence for Native historians and tour guides so that they can speak to the tourists about their tribe’s history there and their continued presence,” Doyle explains. “Each tribe could have its own teepee; if you have a Blackfeet teepee, you would have a Blackfeet historian, maybe a tour guide, maybe an artist. Someone could take people on tours of the park to show their trails and different sites. Someone could just provide storytelling right there in the teepee.”

Sholly was initially supportive, but remember, the park is operated by the federal government. The wheels move slowly.

“Yellowstone Park is such an iconic place and there are so many different rules and regulations to keep it safe and so any kind of significant change to the park – creating a new space for example – is going to have to be thoroughly vetted, it’s going to have to be the kind of thing where everyone has something to say about it with many voices heard,” Doyle said.

He’s hoping approval for a teepee village along with its location in the park can be determined by the end of the year.

What has already been approved for summer of 2022 inside Yellowstone to celebrate its Indigenous people are a series of performance pieces Doyle is collaborating with Mountain Time Arts on staging. These ephemeral performances will be free to the public and only last a few days.

An astonishing 44 different tribal nations have an association to the land upon which Yellowstone National Park sits. It was truly a shared homeland. They have all since been pushed out of the two-plus million-acre park. While Yellowstone serves as a wonderful refugee for animals, its creation made refugees out of Native people. Native people whose lifestyle mirrored their natural surroundings.

“We lived a seasonally, migratory lifestyle, so all the tribes crossed over into the same properties all the time for thousands of years and we share a lot of the common cultural features of the region because of the climate and the resources that are available and the ways of life that made things possible – the bison culture basically – and the wild plants and roots and the trade culture,” Doyle explains. “That's one of the things that's been overlooked, there was so much trade here and for so long that there was even a sign language developed to help facilitate it all. It’s a remarkable accomplishment we want to celebrate.”

The project to return a permanent Indigenous presence to the park will be called “Yellowstone Revealed.” Advocates want to pull the veil back on the histories that have been hidden from the now roughly four million tourists who visit the park annually.

“The original title was ‘Yellowstone Reconsidered,’ but then when we had our (June) meeting and we talked to the different Native people from throughout Montana and Wyoming, there was one Shoshone lady from Wind River and she said, ‘what we're doing here is not just reconsidering the park, we're revealing the truth behind it, the actual culture, the people and the experiences and ways of life,’” Doyle said.

For too long – since their inception with Yellowstone National Park in 1872 – America’s national parks have done an honorable job protecting land and wildlife while simultaneously failing to accommodate the Native people who called those lands home. As the country reckons deeply with its racist founding and traditions, and the genocide it inflicted upon its Indigenous population, this seems like the perfect time to make one small correction to that shameful record.

“It's a moment in our country's history where there's a lot of reflection on the past and how we can have a more accurate portrayal for generations to come so that we can have a more equitable way of doing things,” Doyle said. “It's all part of a cultural movement right now in our nation.”