Medicine Man Gallery owner Mark Sublette has many interests: Western and Native American art, the Southwest, old trading posts in Navajoland, Santa Fe and its vibrant culture, murder mysteries, and history in all its forms. These interests all intersect in his book series, A Charles Bloom Murder Mystery. The newest entry, The Candy Man, will be released October 1, and in it Sublette once again brings all sorts of Southwestern elements into a story of intrigue, art, thrills, and murder.

The new book again follows Charles Bloom, an art dealer whose own curiosity leads him deep into a web of corruption and crime as he unravels the mystery of a stolen painting, while his friend and mentor Marvin Manycoats search for a long-missing body in the desert. The two men meet a colorful array of characters on their journeys, which are destined to unite on the eve of the presidential election. The political angle of the book is a product of perfect timing: the real presidential election will take place a month after the book’s release.

“The politics angle should be a lot of fun right before the election,” Sublette says with a laugh. “The books take place in the modern-day, so it’s very contemporary. The plotline is about the upcoming presidential election, but not about Trump or some other nebulous idea around that. It’s about how art can play a role in these events that have big, important outcomes.” 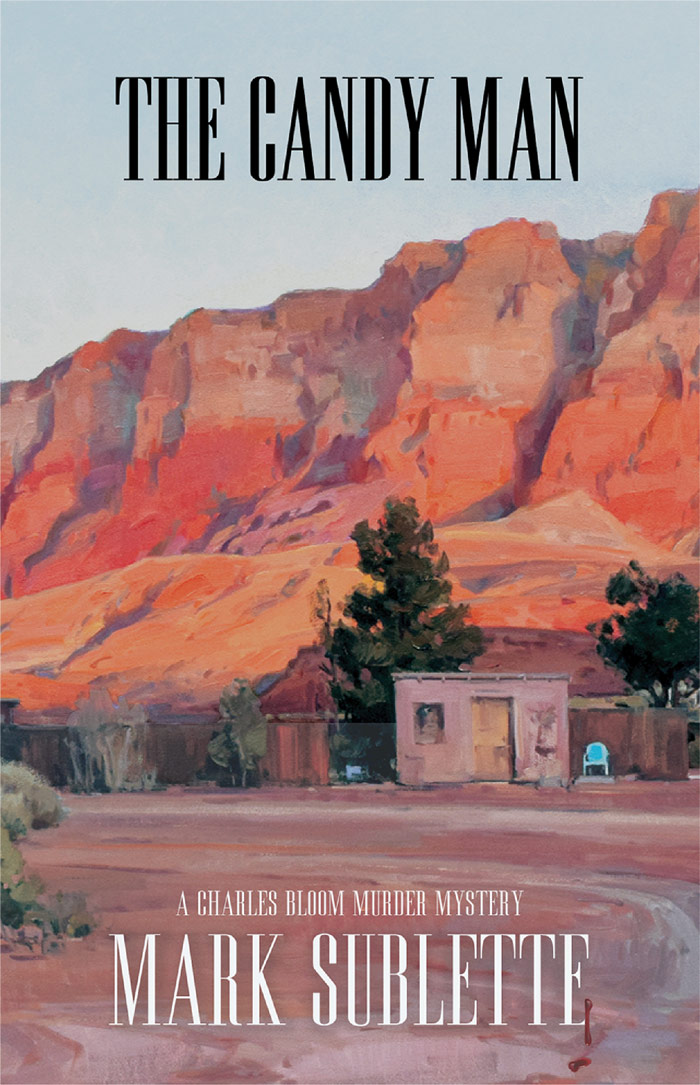 In many ways, the art is a character unto itself. Chapters of the books take place in art storage vaults, Navajo trading posts, and art galleries, and on numerous occasions, characters speak with authority on many of the great artists of the region: Fritz Scholder, Maynard Dixon, Georgia O’Keeffe, and Kiowa painter T.C. Cannon, whose brief career and tragic death plays a large role in the mystery of the book.

“T.C. Cannon died very young at 31 years old, so it sets up so many possibilities just because he wasn’t around very long, like [Jean-Michel] Basquiat. You just ask yourself so many questions: What happened? What was going on? I love T.C. Cannon’s work and collect his work. He was a Santa Fe guy, and was living in Santa Fe when he died in a car accident,” Sublette says, adding that a painting mentioned repeatedly in the book is a plot device and does not exist. “T.C. is mentioned a lot, but really it all comes down to this art dealer protagonist, Charles Bloom. He works on Canyon Road selling contemporary Native American art. He’s married to a Navajo weaver from the Toadlena Basin, and he’s experiencing the duality of an anglo married to a Diné person and all the cultural things that come with that. He’s an interesting character.”

The cover of The Candy Man features a painting by Josh Elliott titled The Blue Chair. Sublette represents the Montana-based painter at his Tucson gallery, and the work comes from his own art collection. Both the title of the book and the title of the painting play roles in the book, particularly with Marvin Manycoats, who brings a distinctly Navajo perspective into the story. “I had the title and cover image for the book before I even started writing. The hardest part about every book is coming up with that nugget of inspiration. And when you find it, you know it immediately and say, ‘That’s it right there. That’s the book,’” the author says. “One of the inspirations for this one was this old-time trader’s son who worked on the reservation with his father. He would deliver candy to the reservation and had all these great stories. Once I heard that, and thought of Josh’s painting, that was the book right there.”

Sublette, a former physician, also admits his own background helps inform the murders in the book. “When I kill people,” he says, “I kill them correctly. It gives the book a tone of authenticity.”

The Candy Man comes at an increasingly busy time for the author. He owns a gallery and an art auction, designs jewelry, hosts a podcast, has a YouTube channel with hundreds of videos, he just recently started publishing a new online magazine and now here he is with his eighth Charles Bloom entry, his ninth fiction book. He must never sleep.

“Never,” he jokes. “I already have the idea for the next book.

The Candy Man, published by Sublette’s Just Me Publishing, released on October 1st, 2020. Click here to order your copy today.