What Zane Grey did with words in the early 20th century, Ed Mell has been doing with paint for the past 40 years.

"Riders of the Purple Sage" by Arizona Opera

Both Zane Grey and Ed Mell are storytellers. Both capture a mythic West. A West of fantastic grandeur and possibility.

They do so in a colorful, lyrical, romantic style.

Mell was born and raised in Arizona. He’s spent most of his life there. Grey spent the majority of his life “back East,” but visited Arizona regularly between 1918 and 1929. (Oddly enough, a dispute over bear hunting season with local officials in 1929 led him to vow never to return to the state. He kept the promise.)

These seemingly kindred spirits, essential to the nation’s imagination of the West, separated by time – Grey died in 1939, Mell was born in 1942 – were finally brought together in 2017 – by the opera.

Zane Grey, Ed Mell and “Riders of the Purple Sage”

Grey’s 1912 dime novel “Riders of the Purple Sage” centers around a modern heroine – at least for 1912 – and a rugged, mysterious, solitary gunman. Those character types have been the starting block for countless subsequent Western books, movies and paintings.

“Riders of the Purple Sage” proved outrageously popular. It has been adapted to film five times, most recently in 1996. The Library of Congress considers it among “One Hundred Books that Shaped America.”

Composer Craig Bohmler was unfamiliar with the book until out on a hike in 2012 in Payson, Arizona. A surprise rainstorm sent him dashing into the nearby Zane Grey Cabin. While waiting out the weather, Bohmler was introduced to the legend of Zane Grey. Later that night, intrigued by “Riders of the Purple Sage’s” musical title, Bohmler dove it.

Film director and producer Kristin Atwell Ford picks up the story from there.

“(Bohmler) said, ‘oh my god! This is operatic.’ The material just took him away,” she recalls.

Ford and Bohmler, longtime friends, were celebrating Ford’s birthday at a dinner with family later that same year when he recounted the story of his introduction to Grey.

“He was telling me this story of Jane Withersteen (‘Riders’’ heroine) out on the Arizona-Utah border in the 1870s and my vision just filled with Ed Mell’s artwork,” Ford remembers. “I said, ‘do you know a painter Ed Mell?’ And he said ‘no.’ And I said, ‘you’ve been in a lawyer’s office in Arizona, you’ve seen Ed Mell’s work!”

Ford had long been an admirer of Ed Mell.

“He's my favorite living artist. I used to go to Ed's shows when had a dealer in Scottsdale and I would take the program from his show and cut it up and put it in little frames,” Ford said, laughing. “His work just speaks to me, I don't even know if I knew I was looking at a modern approach to landscape painting, all I knew is that when I stood in front of his canvas, it felt to me like it felt to be out in the wilderness. He really captures the spirit and the feeling and that's what drew me to his work.”

“This is it; this is the fifth character in show,” Bohmler told Ford after reading the book.

Bohlmer’s “Riders of the Purple Sage” premiered with the Arizona Opera in 2017 and had begun a return engagement in 2020, right before COVID hit.

To support the production, Mell translated the Arizona landscape into a monumental set.

The largest temporary LED video wall in the United States at that time – roughly 40-feet by 60-feet – was used as part of the production. Imagery of Mell’s skies rolled across the video wall while hard set pieces were based on his unique style.

Ford’s film, “Riders of the Purple Sage: The Making of a Western Opera,” documents the artistic process behind everyone involved in the opera with a deep dive focused on Grey, Bohmler and Mell because all were inspired by the Arizona landscape for this work.

The film is available from Thursday, March 25th to Sunday, April 11th. Tickets are $10 each at: watch.RidersOperaFilm.com. The film’s streaming premiere will benefit The Actors Fund, a national nonprofit that provides a safety net for creatives sidelined by the pandemic.

Up close with Ed Mell

It has been said, “never meet your heroes.”

Ford disagrees, having spent hours with him during the filming of her documentary.

“He's a very gentle soul, you could almost say he's shy, but he's also very confident in his work because he works hard – he has an amazing work ethic,” Ford said.

Seeing his studio for the first time remains a special memory for her.

“To see the images that he keeps close to him to inspire him was so cool – he’s a huge fan of Maynard Dixon, so he pays homage to the masters who’ve come before him, but at the same time, he’s a titan – in his studio he’ll be working on a big canvas and then he has little things, and he has his studies, and the art that he collects,” Ford describes. “Then he'll have a classic car in the garage and then, Ken Richardson, his studio manager and gallery manager, has his side where he does all the framing and he has his art over there”

One especially remarkable aspect of Mell’s artistic process has stuck with Ford.

“He turns the painting and he paints sideways and upside down,” Ford observed. “Then he looks at it in a mirror, he said, ‘things stand out,’ when he looks at it backwards. To see the world through his eyes is really something and the way he gets there is fascinating.” 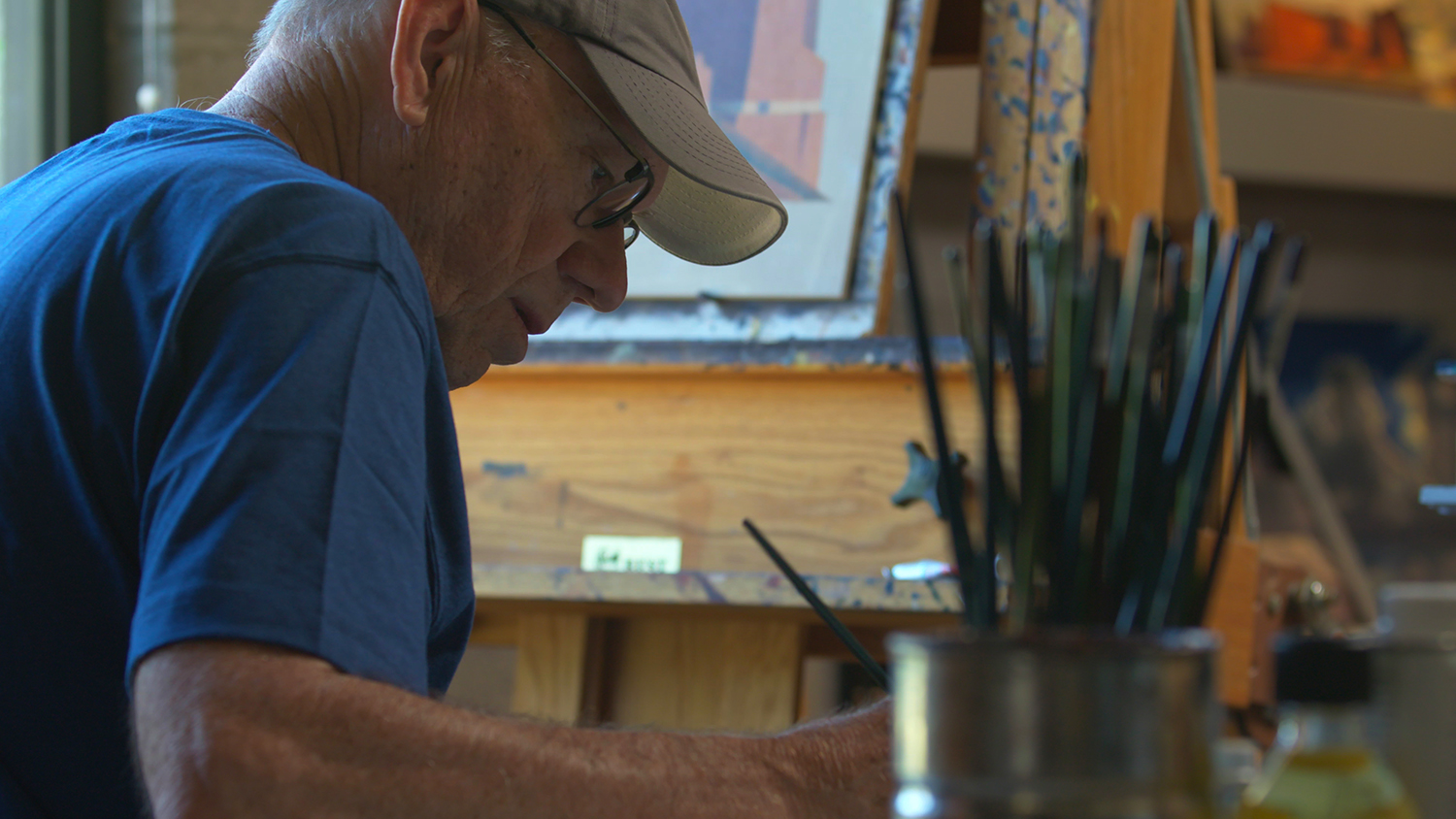 “Riders of the Purple Sage: The Making of a Western Opera” supports The Actors Fund

If you or someone you know works professionally in theater, film, television, music, opera, radio or dance, The Actors Fund likely has a program that can help support you through COVID closures. Services include emergency financial assistance, affordable housing, counseling, secondary career development and more.

“We're reaching out to everyone to take their ownership in this film to spread the word that there's a safety net for theatre professionals, and also to build an audience for the film for when we go to streaming and help remind people what makes live theater special and why,” Ford said.

Creative professionals can apply for emergency pandemic grants at: