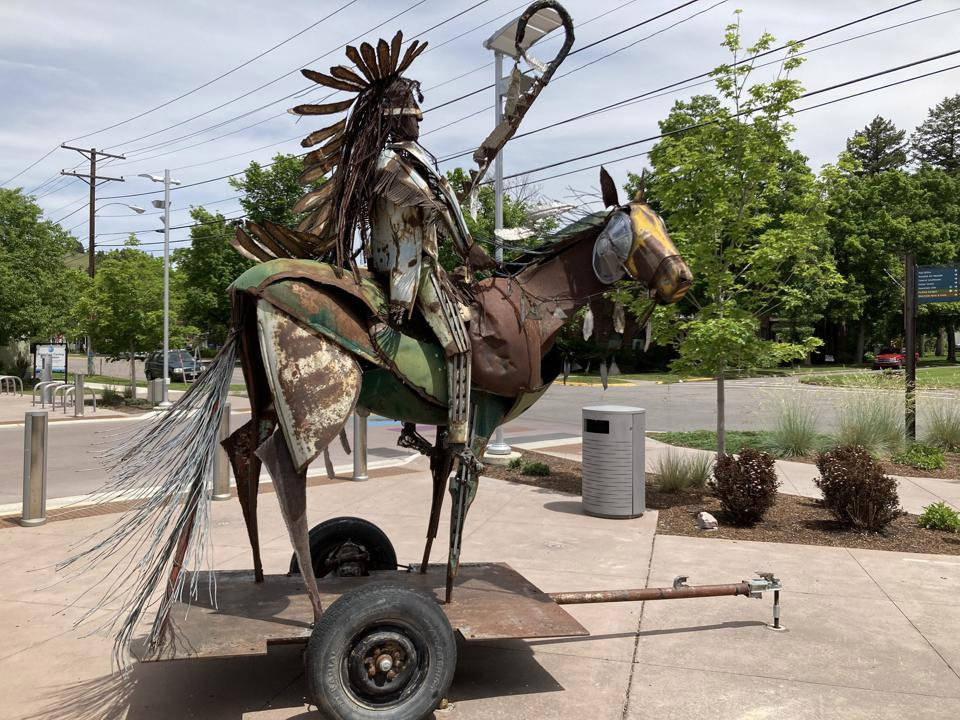 In June of 1964, floods ravaged the Blackfeet Reservation in Montana killing 31 people. It has been called the state’s worst natural disaster. The flooding swept Jay Laber and his family all the way to New Hampshire where they relocated after losing everything to the water.

Laber was 3-years-old at the time.

When he returned to Montana in the 1990s, among the first pieces of sculpture he created utilized rusted parts pulled off cars destroyed by the flooding and left to rot over the preceding decades.

“'Reborn Rez Wrecks' is a good metaphor for Jay's sculptures as they relate to our tribal communities,” Corwin Clairmont, Laber’s teacher and mentor, and member of the Confederated tribes of the Salish and Kootenai, said. “We are sometimes seen as discarded or forgotten people, and to take something discarded and then resurrect it into something of strength and beauty is quite wonderful, and is what many of our tribal communities are striving to do as a people.” 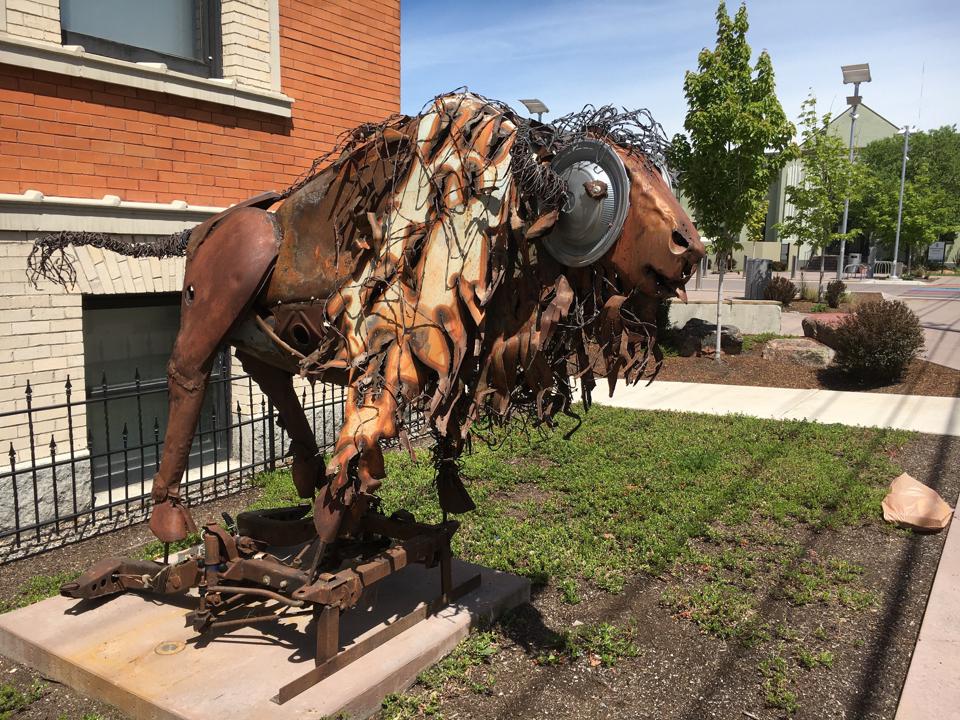 “It was absolutely a conscious choice,” Brandon Reintjes, Senior Curator, Missoula Art Museum, said. “He saw the abandoned cars on the reservations, both the Blackfeet and the Flathead, which sometimes get used as a stand in, or stereotype, for poverty and a host of social ills in both the media and popular perception, and he took that raw material, and those perceptions, and uses them to create haunting pieces of contemporary sculpture that celebrate Native people and traditions.”

As America now reckons with its colonial history in a manner it never has previously, exhibits like this, from the perspective of the persecuted class, can serve a greater purpose.

“He saw his sculptures as fighting stereotypes of tradition and Native culture by updating themes and ideas of Native people with contemporary ideas and materials,” Reintjes said. “His sculptures don’t erase the past, they reflect the traditions and values that are the foundation for Native people, but they point to the future, to the present, and show the Blackfeet and Native people as resilient, present, active, engaged.”

It’s an important message for white and Native audiences.

“A guide to our future, it is critical that we retain our rich tribal stories and culture that our ancestors have passed down for over 10,000 years,” Corwin said. “Jay's sculptures embody these personal and tribal cultural objectives.”

From junked car parts, Laber has breathed a dynamic spirt and sense of movement into the works. They possess energy.

Nothing has been lost which might have otherwise been better captured in Carrara marble or bronze. Quite the contrary, the rust, the jagged edges, the worn materials give his work a presence something “finer” couldn’t replicate.

“When using selected car or farm machinery parts, Jay was careful not to change the parts to the extent that the part couldn't be recognized, as it would lose its integrity and the important record or stories the pieces might contain,” Corwin said.

“There’s an incredible ingenuity in how Jay created his pieces, selecting just the right found part to make the exact expression he was going for,” Reintjes said. “He would think about his pieces for a long time, then go and put things together surprisingly quickly.” 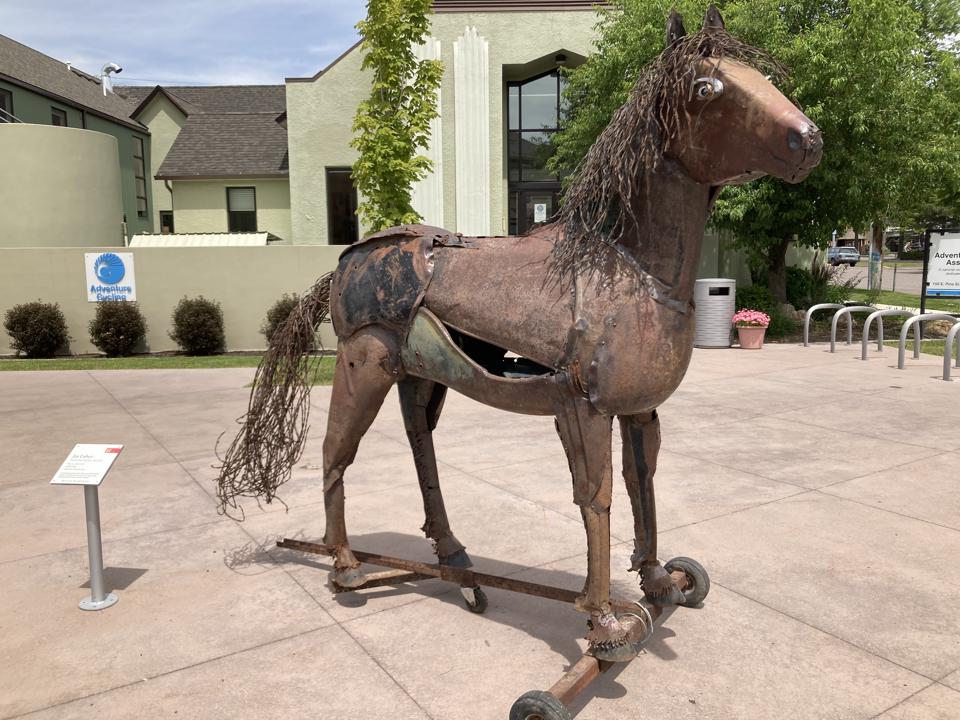 Outside of Missoula, visitors to Montana’s Glacier National Park should take the opportunity to see Laber’s “Sentinel” sculptures, four of which can be seen upon entry to the Blackfeet Indian Reservation, which abuts Glacier on its eastern side, from the four directions. MAM’s exhibit includes one of Laber's first sentry pieces, made in one of Clairmont's classes.

Laber died of cancer last year. The best way to meet him now is through his work.

“His art was a clear reflection of his culture and life experiences,” Corwin said. “His boundless energy, spirit, personal struggles, love of animals and tribal culture and community is infused in his sculptures.”

A five minute walk from MAM takes visitors to the newly resurrected 120 Higgins Avenue building which currently houses the relocated Radius Gallery, along with Relic Gallery and Art Vault.

Todd is Professor Emeritus of Art and Humanities at the University of Montana where he taught from 1970 to 2000. The installation includes nine of Todd’s prints that span 58-feet of the alley wall. 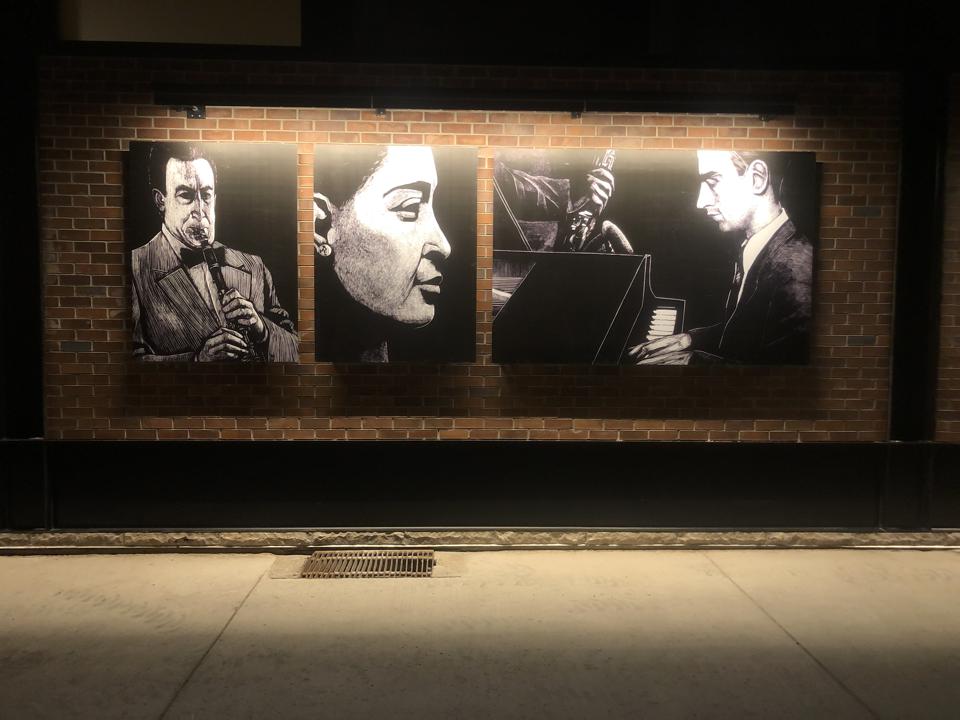 “Allez!” had initially been scheduled for a later premier, but organizers actually pushed up the timeline, believing the public art project could provide much needed hope in response to the COVID-19 pandemic.