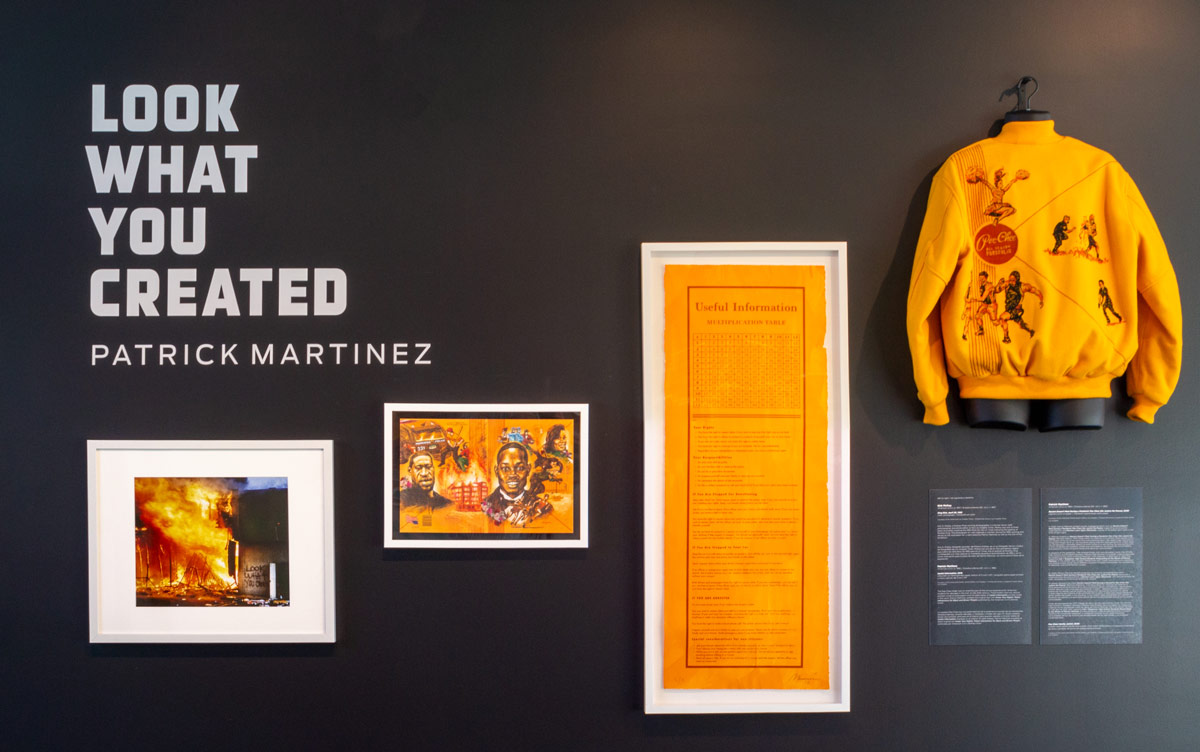 Patrick Martinez was 11-years-old when he, along with the rest of America, watched Rodney King viciously beaten on television by a pack of Los Angeles police officers in 1991. By that time, the cops who attacked King were beginning to reinforce a new narrative forming in popular culture about law enforcement.

Growing up in the 80s, Martinez (b. Pasadena, CA, 1980) remembers police being presented to him as positive role models. Examples of civic pride. Cops would come to his school in suburban Los Angeles for assemblies – like they did everywhere else in the country – and talk about their jobs, their community service, the D.A.R.E. program and how to “just say no.”

As Martinez matured and the Pollyanna 80s gave way to the more cynical 90s, his “inputs” changed.

“I feel like I was coming out of an innocence that was developed in the 1980s when I was a kid,” Martinez remembers. “The 90s were the flip of that.”

Hip-hop group N.W.A’s “Straight Outta Compton” album featuring the song “F**K tha Police” was released in 1988. The same year as Public Enemy’s “It Takes a Nation of Millions to Hold us Back.” Both albums went platinum, denoting sales of one million copies. Their cultural impact as popular verbalizations of long held resentment toward police specifically and systematic racism in American even more powerful.

Martinez developed a growing interest in L.A.’s graffiti culture. Graffiti culture everywhere standing against the establishment. Then there was King’s beating followed by his attackers’ acquittal.

Police transformed from heroes to villains, the updated information disseminated through his music and the trial validating his personal experience. As a teenager he remembers being “messed with” by cops. He remembers his older brother being regularly pulled over while driving for no reason. He remembers police planting guns on his brother and his friends.

“(A) toxic relationship – like it is now,” Martinez said of his feelings about law enforcement. “I don’t feel good when I see (police). I’m not scared of them anymore, but when you saw them when you were young, your heart would drop. Your heart would drop into your stomach.”

These are the insights which take shape in the latest exhibition of Martinez’ work, “Look What You Created,” at the Tucson Museum of Art. The exhibition’s title references the 1992 Los Angeles uprisings in the wake of the acquittal of the police officers who brutalized King and a “Los Angeles Times” photograph featuring the phrase “Look what you created” spray painted on a burned out building.

Martinez’s work reveals the startling analogies between such imagery and events and recent nationwide protests and demonstrations.

“The only thing that changed from Rodney King to 2020 was the quality of the video,” Martinez remembers being direct-messaged on social media during the tumult across the United States caused by repeated high-profile examples of police violence last year.

For a nation experienced with all-to-slow progress toward civil rights and equality, 2020 and the years preceding it seemed to actually represent a reverse in both efforts. In “Look What You Created,” the “past is the present,” with works that reverberate a sense of urgency, immediacy, and, ultimately, an ongoing demand for action.

“In a museum context, which is a public space – these (events) are catalogued, recorded – cementing these happenings in artwork – art as artifact is important,” the artist said. “It’s acknowledging certain traumas, hurts.”

The necessity of the art museum’s role in society as a historical repository for presentation of people’s history, particularly the lived-experience of minorities – as Martinez explains it, “acknowledging certain traumas” – has become shockingly apparent in 2021. Efforts around the nation to entrench the teaching of American history through the prism of white nationalism have spread. A rejection of Critical Race Theory, which seeks to acknowledge how race and racism have been central to America’s development since its founding, rejects truth. It rejects accuracy. It rejects the continuing impacts the nation experiences as a result of slavery, Manifest Destiny, Native American genocide, lynching, Jim Crow, policing and innumerable other systems and structures supporting white privilege and white supremacy.

Art museums, by presenting a more broadly considered view of American history informed by minority artists like Martinez – a view of American history that puts the African American, Native American, Latinx, Asian American, immigrant, working-class, poor, female experiences of the nation on equal footing with that of the land-owning, ruling class, white males which have always dominated it – become the country’s most important public storytellers and record keepers.

With their marble and pillars and scholarship, art museums – long as much a part of America’s white power structure as any courtroom – can fill their spaces with underrepresented perspectives. They can become refugees from white nationalism. Havens for the truth, warts and all. Their prestige lending credibility to the messages shared by artists. Messages, the authenticity of which, many citizens don’t want to acknowledge. Museums’ gravity and substance can affirm to the nation that this is our history and here is the proof.

Museums also have the powerful effect of slowing people down.

“The news is very fast and disposable, the way we digest information, it’s headline news one week and the next week (we move on),” Martinez said.

Certain events shouldn’t be moved on from in a week. Maybe ever.

Museum exhibitions such as “Look What You Created” force visitors to slow down and consider what has actually changed in America with police violence against minorities and race relations since 1991. Deep and critical thinking on that topic would be a valuable civic exercise museums can foster.

The artist does the work. The museum fixes it in history.

“When I’m doing the work, it’s very heavy, but I want to be useful,” Martinez explains of how his artmaking helps him “negotiate the chaos” of America’s broken system of policing. “When I’m making it, I feel like I’m being useful, I want to get this (message) out, there’s an urgency.” 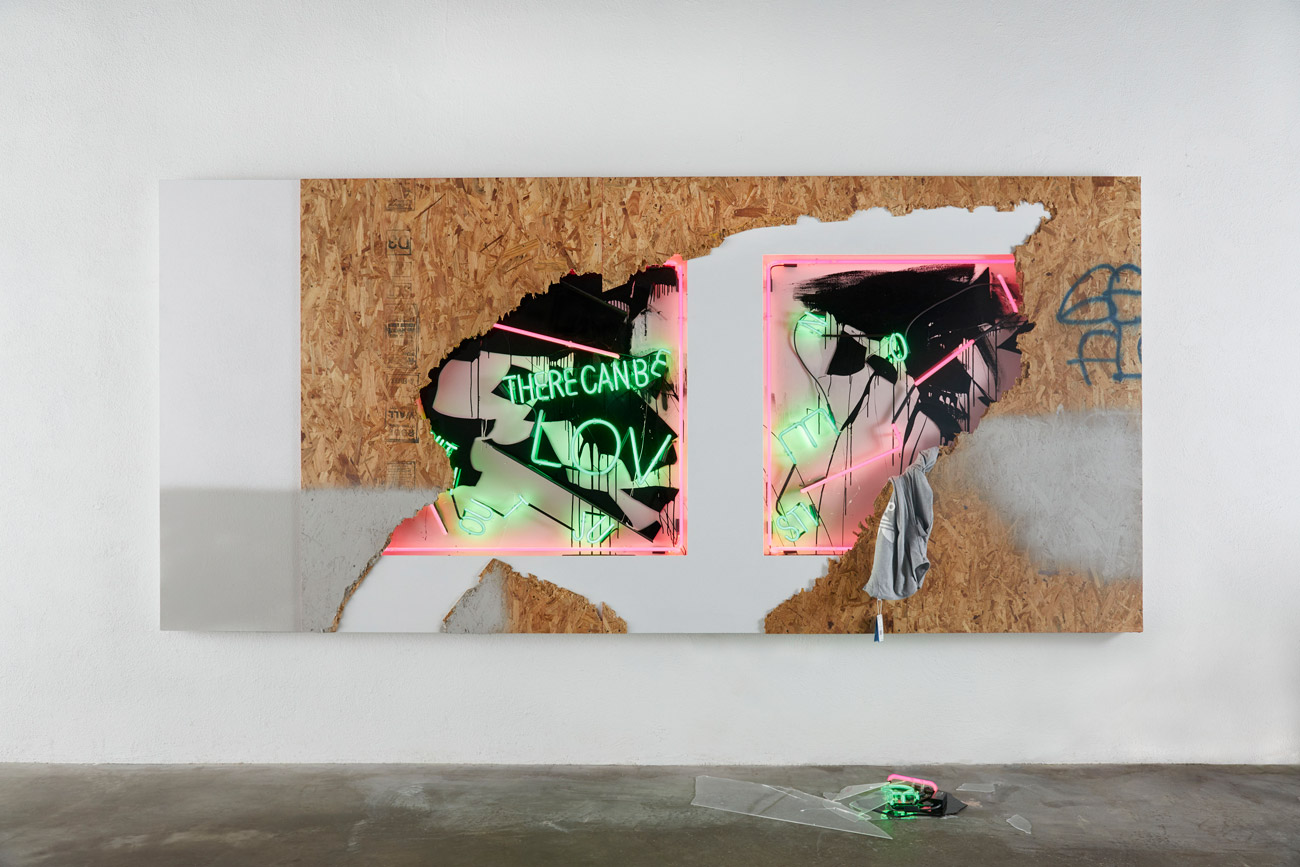 Patrick Martinez - No Justice, No Love | Courtesy of the artist and Tucson Museum of Art