Using nature as his guide, Matt Smith has brought the Southwest desert to life in his oil paintings. 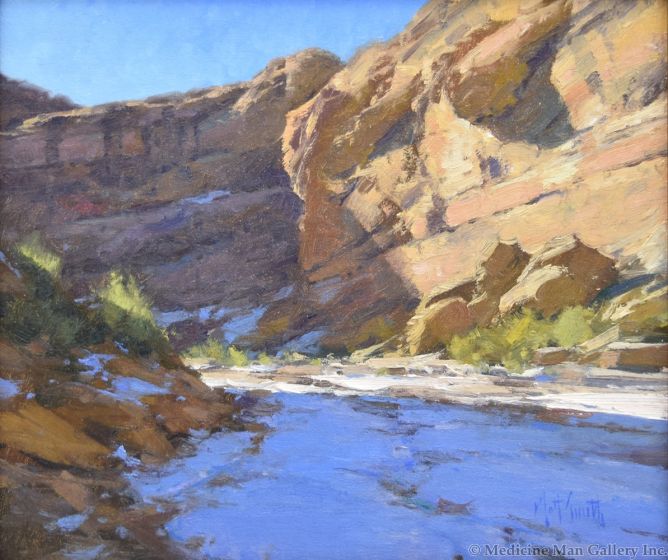 Arizona State University, like many big American universities, has a notoriously nightmarish parking system. It was during that long walk to his car one day just prior to graduation when Matt Smith felt the universe bearing down on him. “It felt like miles to my car,” he recalls. “I just remember thinking, ‘I’ve got nothing. Where do I go? And what do I do?’ It was intense. I didn’t even go to graduation. I had them mail me my diploma.”

They say artists are resourceful people, and although Smith wasn’t yet a professional artist, his resourcefulness was shining through: He went out and picked up every book he could find on painting, started visiting Scottsdale art galleries to look at art in person and took workshops at the Scottsdale Artists’ School, including with teachers such as Jim Reynolds, Clyde Aspevig and Skip Whitcomb. “It wasn’t long after that I read an article about Curt Walters. So I reached out to see if he could critique my work. He was in Sedona so I went up to meet him and he was terrific, just really open and helpful, and he gave me a meaningful critique,” Smith says. “Then he said, ‘Want to go painting?’ And there I was painting at 23 years old with somebody of that level. It was surreal.”

Smith would go on to become one of the top landscape painters in the country, with countless awards, gallery shows and museum exhibitions to his name. He’s currently one quarter of the exhibition Four Directions-Common Paths: Oberg, Smith, Whitcomb, Young at the Steamboat Art Museum in Steamboat Spring, Colorado. The exhibition focuses on the plein air aspect of the four artists’ careers.

What’s relatively unique about Smith’s career is how much art, especially Western art, was in his life early on. Born in Kansas City, Smith’s family moved to Scottsdale in 1963, when he was 3 years old. Not only did he get to see the Phoenix area grow into one of the largest metropolitans in the country, he also saw the birth of Western art in Scottsdale. And his parents were even early collectors. “They owned works by George Carlson, Fritz Scholder, Paul Pletka and other works with Native American subjects,” he says. “It was a phenomenal introduction to art.” He remembers being interested in drawing at an early age, something his mother, an art history major, encouraged. By 12 years old he had his first paint set, and by then it was in his blood. 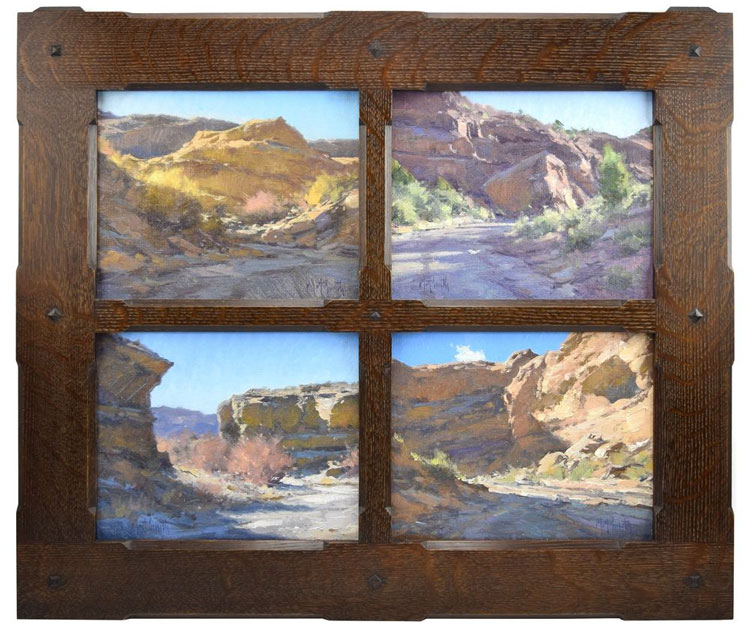 Another element that encouraged his interest in art was travel. The family moved to southern France for two years when Smith was 11 years old, and then lived in Switzerland for a year when he was 16. The purpose of the moves was Smith’s father, who was a strategic planner for Motorola. “Anytime we traveled somewhere we saw each museum. It was fun because we’d jump in a Peugeot and go out to explore a castle or an old village or museum,” he says. “It really exposed me to some new, exciting things.”

At ASU, Smith entered the Tempe school as a business marketing major but quickly went over to painting, although the switch was not what he expected when he found that the programs were geared for abstract and conceptual art. “I learned very quickly that I wasn’t getting the information I felt I needed,” he says. “I was still a teenager then and coming into college I realized I didn’t know the foundational basics.” He briefly moved to Northern Arizona University in Flagstaff, but found the same problem there. “They were pushing modern art and ideas over technical ability. I felt strongly that students should learn to read and write before they’re asked to tell a story, and that’s where school failed me.”

It’s easy to see why Smith, on the verge of graduation, would be having an existential crisis about his career. He pulled through by focusing on the kinds of art he enjoyed, and seeking out artists who were painting similar subjects. He found Walters, and then after that he found landscape painter Merrill Mahaffey, who Smith worked with for year in his studio. “He had me stretching canvases and other things,” Smith adds. “He also focused on the foundational elements of painting, especially working from direct observation. He would tell me to go outdoors.” Smith, who had his first French easel at 23 years old, listened to Mahaffey’s advice and began working out in the elements as he studied the light and the land, and how they interacted in the desert Southwest.

“I started painting the desert because I didn’t have two cents to rub together. And doing it from life was right there outside my door. Around the time I turned 30 I started thinking I should move to Wyoming or Montana so I could paint those sculpted peaks and dark contrasts,” the artist says. “But I stayed. And I learned there’s no better place to understand the organic form than in the Sonoran Desert. It really helped me to paint there. You see it in the plant life, which is so thin and wispy that you have to paint delicately to understand what’s happening underneath. I was glad I stayed because there were so many great opportunities near Scottsdale.”

Scottsdale also had galleries. Early on, Smith was showing figurative works around all Scottsdale, including while he was in high school, but then switched over to landscapes exclusively and was picked up by Trailside Galleries. He gives a lot of credit to Trailside owner Maryvonne Leshe, who believed in her artists and encouraged their growth. “It was a genuine relationship with her,” he says. “They helped me and I helped them.” Smith would also show at Legacy Gallery in Scottsdale and Medicine Man Gallery in Tucson. 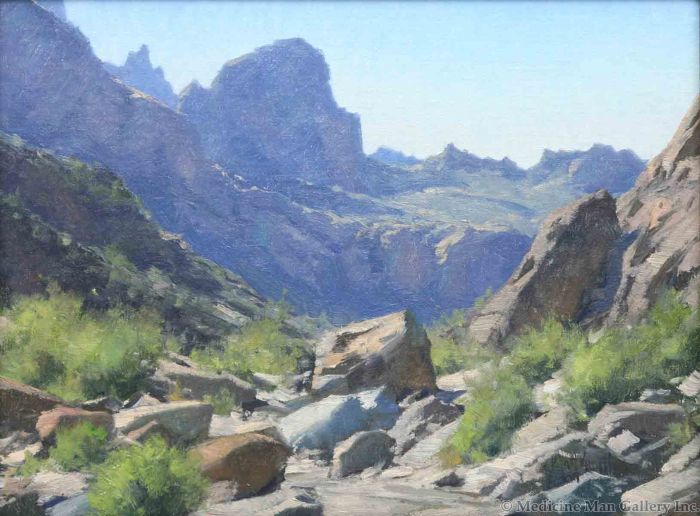 Later, after he was more established, he started participating in some plein air events, including the influential Laguna Beach Plein Air Painting Invitational. And while he could easily start and finish a work outdoors, Smith was also taking paintings back to his studio to finish.

“Initially, when I started I never brought a camera with me into the field and it forced me at an early age to finish these things outdoors. Then I could bring home a finished painting and from that point I could determine if I want to expand the idea,” he explains. “For me there was always a fluid transition from studio to field. It’s exciting to be outdoors, but also big and all-consuming and sometimes you needed to step away from the scene and decompress. You have the bugs and the scenery and the cold and the heat. Sometimes I needed to slow down and focus in an intellectual way. Because when you’re out there for two hours painting, your emotion kicks in and your adrenaline is running—sometimes you need to break away from that.”

These days, when not churning out work for solo shows or museum exhibitions, Smith finds himself teaching. His methods are straightforward: he asks students to break their paintings down into the simplest possible components and then build from there. The artist might lock into what they see and paint it, but what they need is to filter what they see through the fundamentals of drawing, value, design and color.

“The beauty of it all is that I’m still learning myself. I’m 60 years old and I’ve done this for 40 years,” he says. “There is still so much potential in everything.”