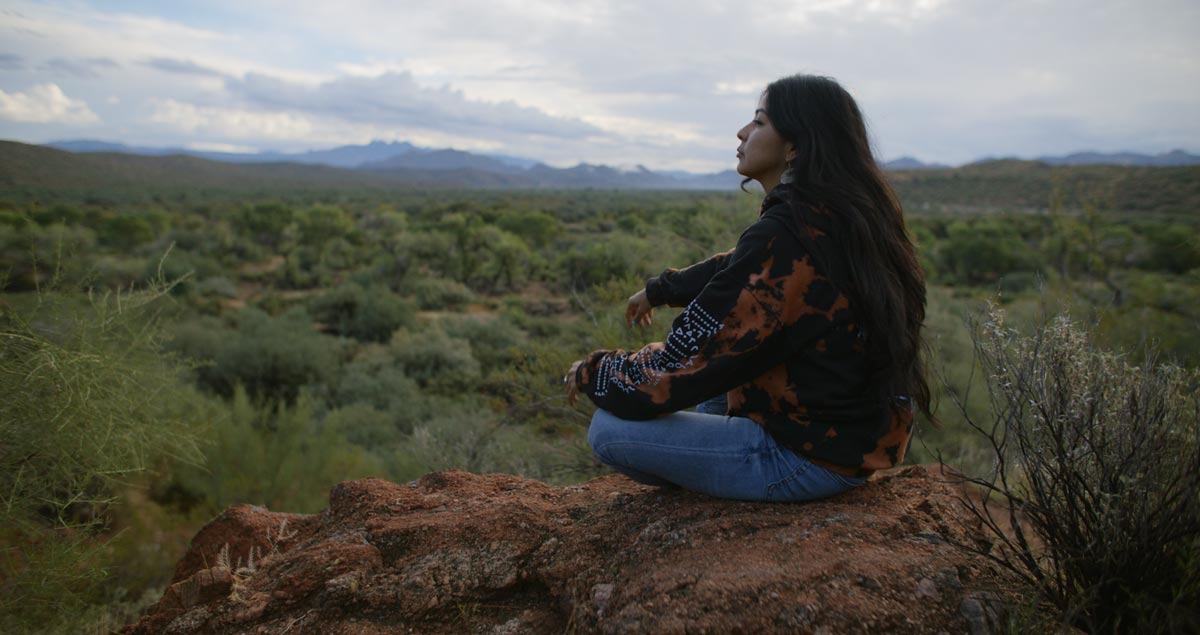 I was excited to be contacted by the National Football League to announce its choice of Lucinda Hinojos (Pascua Yaqui, Chiricahua Apache, White Mountain Apache, and Pima (Akimel O'Odham)) as the marquee artist for Super Bowl LVII being played this February in Glendale, AZ. She is the first Chicana, Native American artist to work with the league. Her painting will be featured on an array of design activations for the event, including game tickets.

“I felt like I got drafted for the NFL because my family was right here and started crying,” Hinojos told me of the Zoom meeting where she was informed the league had selected her for the commission.

Hinojos’ artwork features the Super Bowl champion Lombardi Trophy as its centerpiece and includes multiple symbols representing key aspects of the culture and history in Arizona. Reflected on the trophy are the White Tank Mountains, which can be seen behind State Farm Stadium just outside Phoenix where the game will be played. On each side of the trophy, Hinojos depicts a Fancy Shawl dancer and an Azteca dancer paying homage to the Indigenous tribes in Arizona. Twenty-two diamonds on the mountains they dance atop represent the state’s 22 tribes. An Akimel O'Odham basket sits at the base of the trophy, a reminder of the ancestral homeland upon which the game will be played.

Then there’s the hummingbird.

Hummingbird’s carry deep spiritual meaning to many Indigenous tribes throughout North America. The same goes for Hinojos who regularly depicts them in her paintings. She’s felt a connection to hummingbirds since childhood.

“They always show up, even this morning when I went for a run, there was one right there; they're always showing up for me,” Hinojos told me on the day we spoke to discuss her Super Bowl commission.

Hummingbirds would come to guide and comfort both her and league officials as their relationship evolved. Initially planned as a digital artwork, directors for the NFL’s art project team abruptly changed course and decided they would prefer to have the image painted. This was eight days prior to her deadline for submitting the finished piece. A painting of this size typically takes Hinojos a month to complete.

Shocked, when the artist’s contact at the NFL was informed of this sudden adjustment, she took a moment to think about how best to break this news to Hinojos.

“As she sat there, she heard a flutter by her ear and she looked and it was a hummingbird. When she saw that she knew everything was going to be okay,” Hinojos said. “The next day when they called me with the news about the change of direction, I almost panicked and she saw it on my face and she goes, ‘No, no, no, let me tell you something.’ She shared that story with me and I knew everything's going to be okay. It worked. I finished and it came out so beautiful.”

The local Native American community will be integral to this year’s Super Bowl celebrations. In addition to Hinojos’ artwork for the ticket, she will be working on the largest Super Bowl mural ever at the Monarch Theater in downtown Phoenix. Joining her in collaboration are Cahokia, an indigenous-led platform for creative peacekeeping, and fellow Native American artists Randy Barton (Diné/Navajo), Anitra “Yukue” Molina (Yaqui), and Carrie “CC” Curley (San Carlos Apache). The artwork is a symbol of Indigenous collaboration emphasizing the narrative of community and unity and will include an Apache Woman and Diné rug pattern among its depictions.

The NFL’s official football supplier Wilson is also partnering with Hinojos on a design inspired by her personal artistic journey. The ball will be available for purchase on-line and at the Super Bowl Experience taking place at the Phoenix Convention Center where Hinojos will be appearing, along with her artwork, to meet fans and sign editions of the ball. 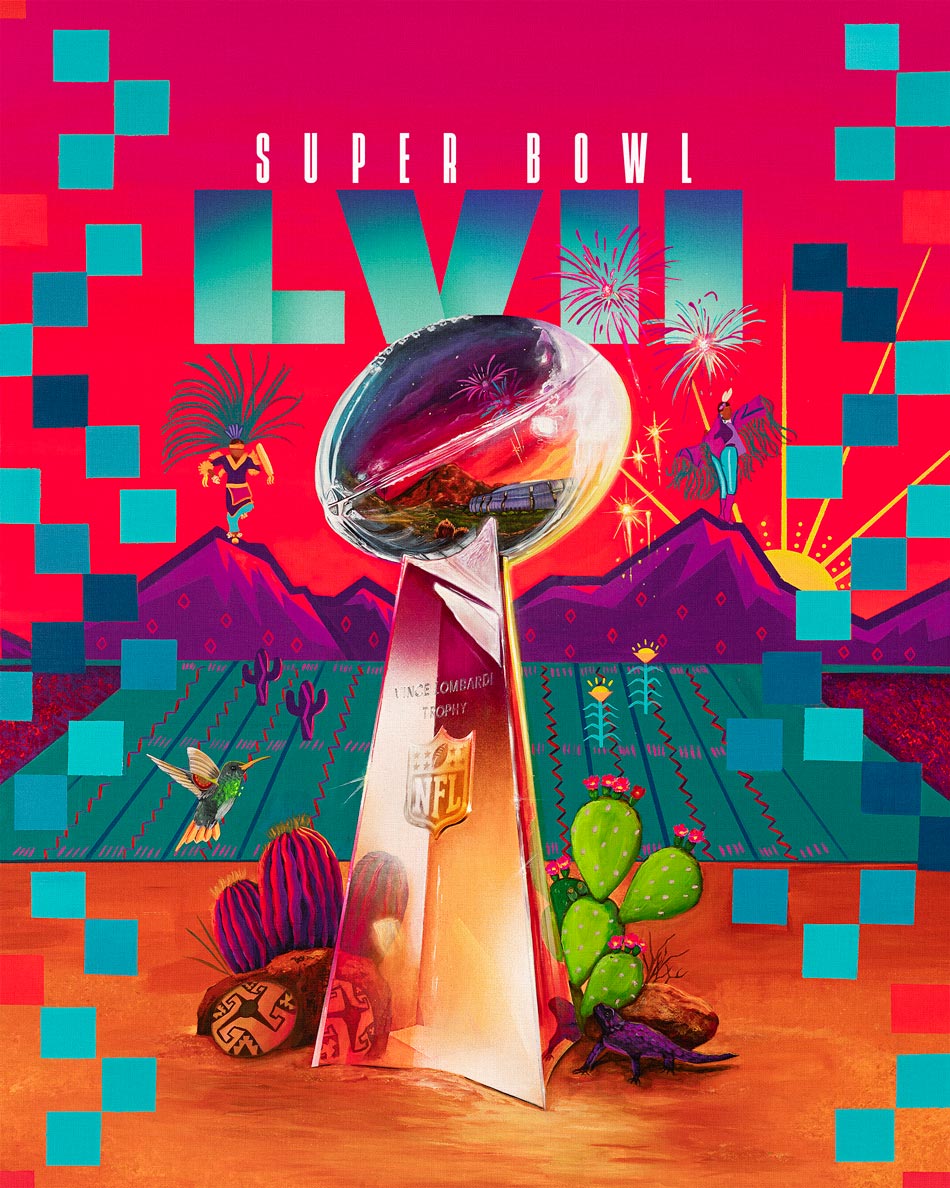 SuperBowl LVII artwork by Lucinda Hinojos | Courtesy of the NFL

Hinojos generally works on murals tapping into the power of community and culture while highlighting political issues. Through her work, she seeks healing while taking inspiration and guidance from her ancestors. In addition to being a visual artist, she’s a cultural organizer and activist using her talent to showcase Native American and Mexican roots.

None of which aligns with corporate America.

“People are going to ask, ‘Why did you want to work with NFL, they’re a corporation, the politics of it,’” Hinojos said. “Well, we need to be in these spaces. This is a form of reclamation, and they have a bigger audience and when we come in these spaces, we need to show truly who we are as Brown people. There is a stereotype, we’re not just (the stereotype), we are entrepreneurs, we are artists, we are creators, we are directors, producers, all this.”

Stereotypes Hinojos had to overcome in her own mind.

“I wasn't raised in my (Indigenous) culture because of cultural assimilation,” Hinojos, who was born in Phoenix in 1981, raised there, and still calls the area home, said. “As a kid, my identity was confused. I didn't know who I was growing up.”

Hinojos counts herself among the millions of Indigenous people in America raised by parents who were raised by parents believing the only way to survive in a white man’s country was by diminishing their indigeneity. Assimilation. Indigenous language, spirituality, ceremony, culture, heritage and history were suppressed. The way forward was not the old ways. The generations of Native Americans now in their 30s and 40s and 50s have grandparents who survived the reservation era and boarding schools. To their children, they often did not pass down the practices they had learned seeing no future in it, only more pain.

Their children – the parents of Generation X and early Millennials like Hinojos – likewise, were often victimized by boarding schools and encouraged to leave their Native practices and the reservation behind during the Indian Urban Relocation period.

All of which was purposefully designed to disconnect Native people, and future generations, from their traditions and culture.

“Growing up, I was more raised Chicano, (but) there is a culture shift happening which is making me really excited,” Hinojos said. “There's a lot of me's who are reconnecting to their Indigenous and Native roots and I'm so happy that this is happening because there's so many of us, there's so many descendants, and when that happens, then all this beauty just happens and it's making me hope that more and more of us Natives are being recognized.”

Few have been more prominently recognized, or have contributed more beauty, than Hinojos.