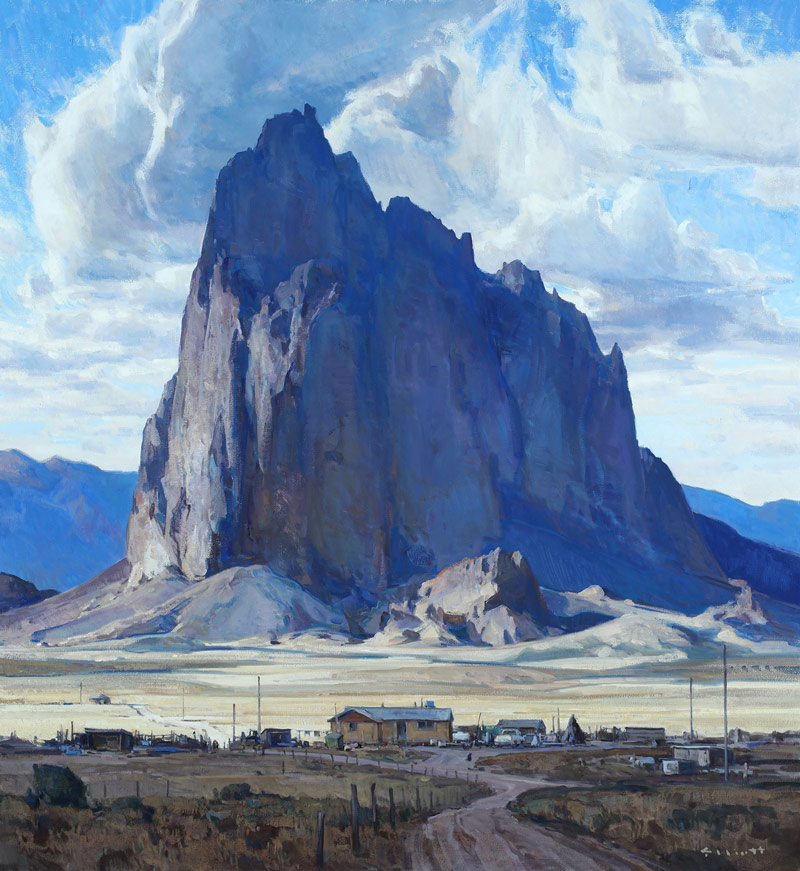 Filmmaker Stanley Kubrick once said, “Observation is a dying art.” His point, one reinforced in his films, was to stubbornly wait out the silence by just looking. Witnessing. Waiting.

Early in his career, painter Josh Elliott found himself behind an easel in the desert. The Montana-based artist had only painted mountains and forests, snow-flecked ridges and rocky peaks, and glacial valleys filled with emerald water. Suddenly the desert seemed so alien and strange to his brush. So he just waited, witnessed and observed.

“It was a real struggle early on. I was so used to painting Montana,” Elliott says. “I remember I had never seen orange shadows on cliffs before. I had seen purple shadows, but never orange. After you just watch it, though, it almost becomes second nature. The secret for me was just painting what I see, not necessarily what I think I see, and certainly not painting from a formula. Just observing the light and the forms, it opened up for me and I could understand what was in front of me.”

Today Elliott is one of the guiding forces of American landscape painting, and his observations have expanded his work from Montana’s mountains to Arizona’s deserts to rural America to ranch and cattle country, and everything in between. He will be showing his newest batch of paintings, many of them scenes of the desert Southwest, on November 13 at Mark Sublette Medicine Man Gallery in Tucson, Arizona.

Works in the show come from Canyon de Chelly, Death Valley, Vermilion Cliffs and, in Shiprock, Shadows and Shelter, from the stone monolith of Shiprock in New Mexico. The work, which shows a small village near the base of the spike of rock jutting from the desert soil, shows how Elliott’s work is both an observation on the land and the people who interact with it. He is no stranger to painting lonely towns, long-abandoned cattle pens, generations-old farms and roads slicing through valleys. The human element and its effect on the land are never too far away.

“It feels truthful and authentic to me. I like that phrase, ‘The good ol’ days are now.’” He says. “When I see a beautiful scene and it has a trailer house, it doesn’t take the beauty away for me. It anchors it to us as humans. We relate to it the way we relate to another person. For the Shiprock painting, I used a combination of different references, so it’s sort of a composite of different images, sort of orchestrated as a concept. It was based on an idea I had at home and after it came to me I did a quick 10-second thumbnail sketch. It had to ferment a little after that, but eventually worked its way out. They don’t always come easy, though. I think I painted the sky three or four times.”

Shiprock, of course, is one of the most iconic landmarks in the Southwest and has been painted by numerous artists, but that didn’t intimated Elliott. “I’ve painted some of these famous places before and it always feels weird because so many other artists have painted them,” he adds. “I felt like I wasn’t supposed to be there doing it again, but then I realized you don’t need permission to be who you are, and that every voice, including mine, is valid and is unique as any other artist’s. A musician doesn’t stand back and say they can’t write a love song because there’s too many. It doesn’t work that way. Once you realize that, you can trust your instincts more and quit second guessing your own work and your subjects.” 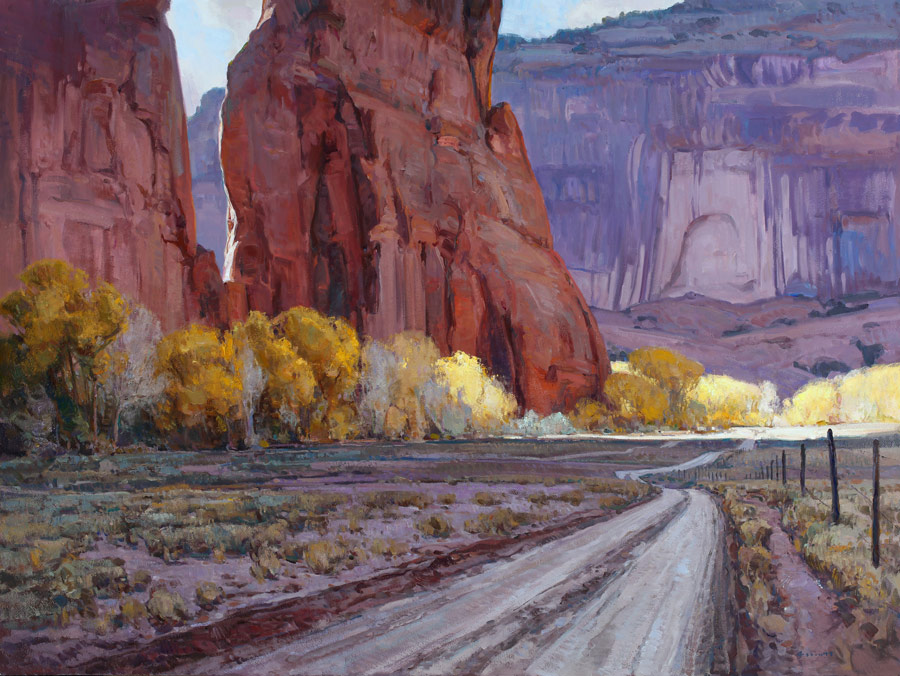 Elliott was first inspired to paint by his father, painter Steve Elliott, who started out as an emergency room doctor and then became a painter at the age of 45. “He quit medicine and went to paint full time, eventually moving to Colorado and sharing a studio with Clyde Aspevig,” Elliott says. “I always wanted to be an artist since middle and high school. In college I took art classes, so many that’s all the classes I really took. Later I quit school and went to learn from my dad. He taught me how to paint outside, showed me Rocky Mountain National Park and just taught me the basics.”

He later returned to school, this time an art school, and afterward got to work in his studio. Like many artists, the first years were hard, but he never gave up and eventually his work started getting noticed, including by other artists—such as Matt Smith and John and Terri Kelly Moyers—and by the organizers of the Western Rendezvous of Art show. “Everything happened in sort of a critical mass,” he says. Before long Elliott would be showing at the Prix de West in Oklahoma, the Quest for the West in Indianapolis, American Masters in New York, Western Visions in Wyoming and many other major museum exhibitions. Major awards soon followed.

Today, Elliott lives in Helena, Montana, and he is continuously pushing himself and soaking up every bit of art history he can, from the California Impressionists such as Edgar Payne and William Wendt, to Ernest L. Blumenschein from the Taos Society of Artists, to Rockwell Kent, the Group of Seven, Egon Schiele, Richard Diebenkorn and Wayne Thiebaud.

And, as always, he observes the land for guidance. “I am searching for truth, at least enough of it to make the work convincing and to form a common bond with the viewer. Different paintings are motivated by different things: color ideas, bold design, something tonal, maybe something where I’ve messed with the atmosphere,” he says. “But they all share a common love with the landscape. I would hope my works are shaped by my own interests, as well as informed by art and art history, but nature is what really guides everything.”