Four monumental figures greet visitors to Jane DeDecker’s Loveland, Colorado studio. In life, the women were larger even than the near 10-foot height DeDecker sculpts them. 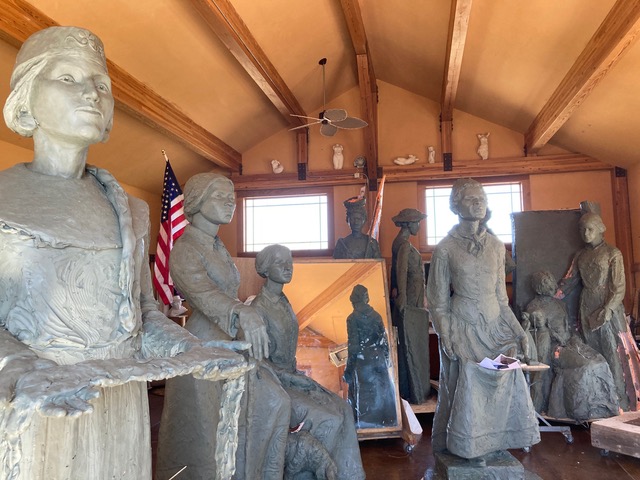 Most audiences will be familiar with Tubman and Truth. Kellogg, a Native American (Oneida), and Wright, a Quaker, are largely anonymous to the general public.

Two Black women, an indigenous woman and a Quaker. You can connect the dots for yourself as to why their contributions to women’s suffrage have been overlooked when compared to Elizabeth Cady Stanton or Susan B. Anthony – two white women. Even America’s progressive movements are shrouded in white supremacy.

The sculpture will be unveiled in Seneca Falls, New York later this summer. The project is sponsored by the Women's Suffrage Centennial Commission, an organization created by Congress to commemorate 100 years of the 19th Amendment and to honor the history of women's fight for the vote.

It was a long fight.

In 1848, the first women's rights convention in the United States was held in the Seneca Falls Wesleyan Chapel which today is known as the Women's Rights National Historical Park.

In 1868, the 14th Amendment was ratified, extending the Constitution’s equal protection to all citizens—defining “citizens” as “male.” Two years later, the 15th Amendment, gave Black men the right to vote.

It would be another 50 years before women received the right to vote with passage of the 19th Amendment on August 18, 1920. As the first African American woman to serve in Congress, Shirley Chisolm, once said, “of my two handicaps, being female put many more obstacles in my path than being Black.”

A group of Haudenosaunee Clan Mothers, Chiefs, scholars, historians, artists and leaders selected Laura Cornelius Kellogg, a member of the Oneida Nation, for inclusion in the statue. Seneca Falls sits on the Haudenosaunee Confederacy’s ancestral land.

While Kellogg morally supported the Suffragists in what they were seeking, securing voting rights for women in America was not her fight. Women in the Haudenosaunee Confederacy have always had a primary role in their nations’ decision making. Kellogg fought for the rights of the Haudenosaunee and all Native peoples. That was her life’s work.

“Most Haudenosaunee and our nations do not participate in the U.S. government and its elections as we are sovereign nations with our own governments that have pre-existed the formation of the U.S.,” Michelle Schenandoah (Oneida), cofounder of Indigenous Concepts Consulting who helped organize a special committee to select Haudenosaunee representation for the monument, says.

Called the Iroquois Confederacy by the French and the League of Five Nations by the English, the confederacy is properly called the Haudenosaunee Confederacy meaning People of the Long House.

The confederacy, made up of the Mohawks, Oneidas, Onondagas, Cayugas, and Senecas, sought to unite their nations in creating a peaceful means of decision making. Often described as the oldest participatory democracy on Earth, the Haudenosaunee Confederacy’s constitution was a model for the American Constitution.

Each nation of the Haudenosaunee maintains its own council with Chiefs chosen by the Clan Mothers. That makes them “matriarchal” societies – meaning the women are the leaders. Haudenosaunee women choose the Chief – and when to remove him.

“Yes, our chiefs are always male, and the Clan Mothers always choose them. They watch the children from when they are little to learn about their character and will determine who the chiefs are based on knowing who holds leadership qualities,” Michelle Schenandoah said. “The clan mothers provide the guidance and direction to their chiefs. The chiefs are to follow their clan mothers’ directives. If a chief begins acting in his own self-interest and not that of the people, she has the authority to remove him from his position and replace him.”

As Mohawk Bear Clan Mother Louise McDonald Herne said, “we weren’t feminists, we were the law.”

DeDecker is working with Haudenosaunee artist Diane Schenandoah, an Oneida Wolf Clan Faithkeeper, on the Kellogg sculpture. Schenandoah’s participation assures that the details within the sculpture – Kellogg’s dress, regalia and the Women’s Nomination Belt she holds along with numerous other Haudenosaunee symbols – are culturally and historically accurate. Schenandoah, in fact, has “co-sculpted” the Kellogg figure, a unique collaboration in which Schenandoah visited DeDecker’s studio and shared in the hands-on work of carving the clay model for the finished statue.

“We influenced your women to stand for their rights, but that history was quickly forgotten, like it was quickly forgotten that our people influenced the formation of your Constitution, which resembles our forms of governance and democracy,” Diane Schenandoah wrote as a reminder when she was asked to participate in the project. “Your people left out the fact that this form of government only works because the women have the power to decide who the leaders are, and when a male leader acts for his self-interests, it is his Clan Mother who can take his leadership title away.”

To reinforce the Haudenosaunee’s tradition of female influence over governance, this quote from Kellogg is inscribed on her statue’s base: “And it is a cause of astonishment to us that you white women are only now, in this twentieth century, claiming what has been the Indian woman’s privilege as far back as history traces.”

Who, again, were the “savages?”

“Laura Cornelius Kellogg stood up against U.S. colonizing practices and represents our Haudenosaunee women in the fullest sense; we are women who've always had full autonomy over our minds, bodies, children, and lands, while occupying the seat of authority in our government,” Michelle Schenandoah, who also publishes Rematriation Magazine, said. “This statue will stand on the lands of the Gayogo̱hó꞉nǫʼ (Cayuga) Nation of the Haudenosaunee Confederacy and it is our hope that Laura's words and actions will inspire the public to be active participants in reclaiming this truth."