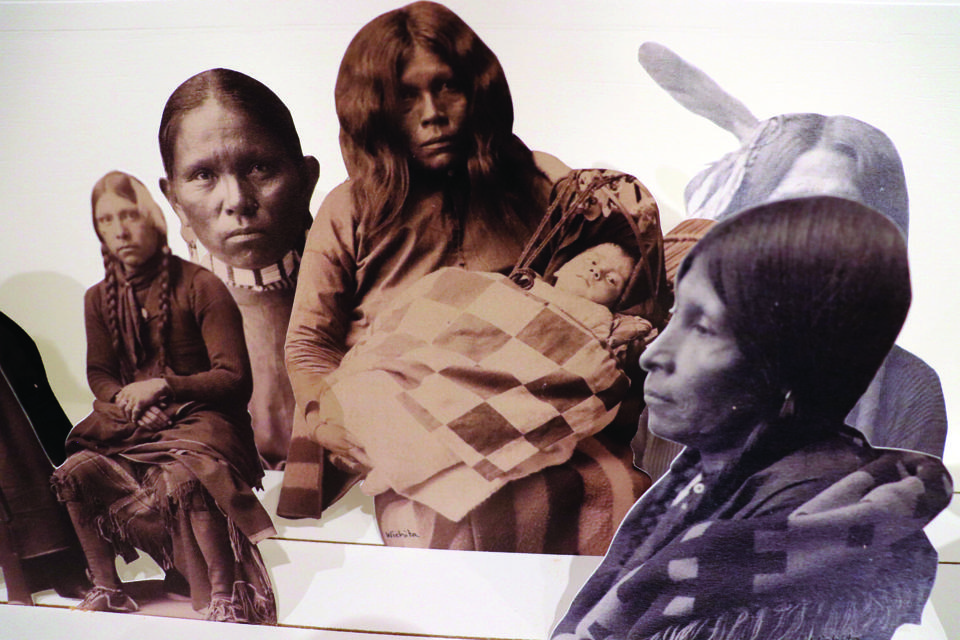 “Immersive” has become the buzzword when presenting museum exhibitions to the point of cliché.

“Immersive” now describes anything big and crowded with lots of stuff. “Immersive” in 2021 includes video projections, audio soundtracks and other various technological advances which often seem to serve no other purpose than to qualify the exhibition as “immersive” for promotional materials.

“Immersive” washes over visitors with light and sound and scale and spectacle, but does it reach them inside? Does the feast for the eyes also serve as feast for the soul? The mind?

Does the experience linger after the virtual reality glasses have been set down and guests return home?

Wendy Red Star’s The Indian Congress now on view at the Joslyn Art Museum in Omaha, Nebraska will.

This immersive experience is small, contained in one tidy gallery. There’s no light show. It’s quiet.  The Indian Congress is not designed to shuffle big crowds in and out or “break the internet.” It’s designed to foster close looking. 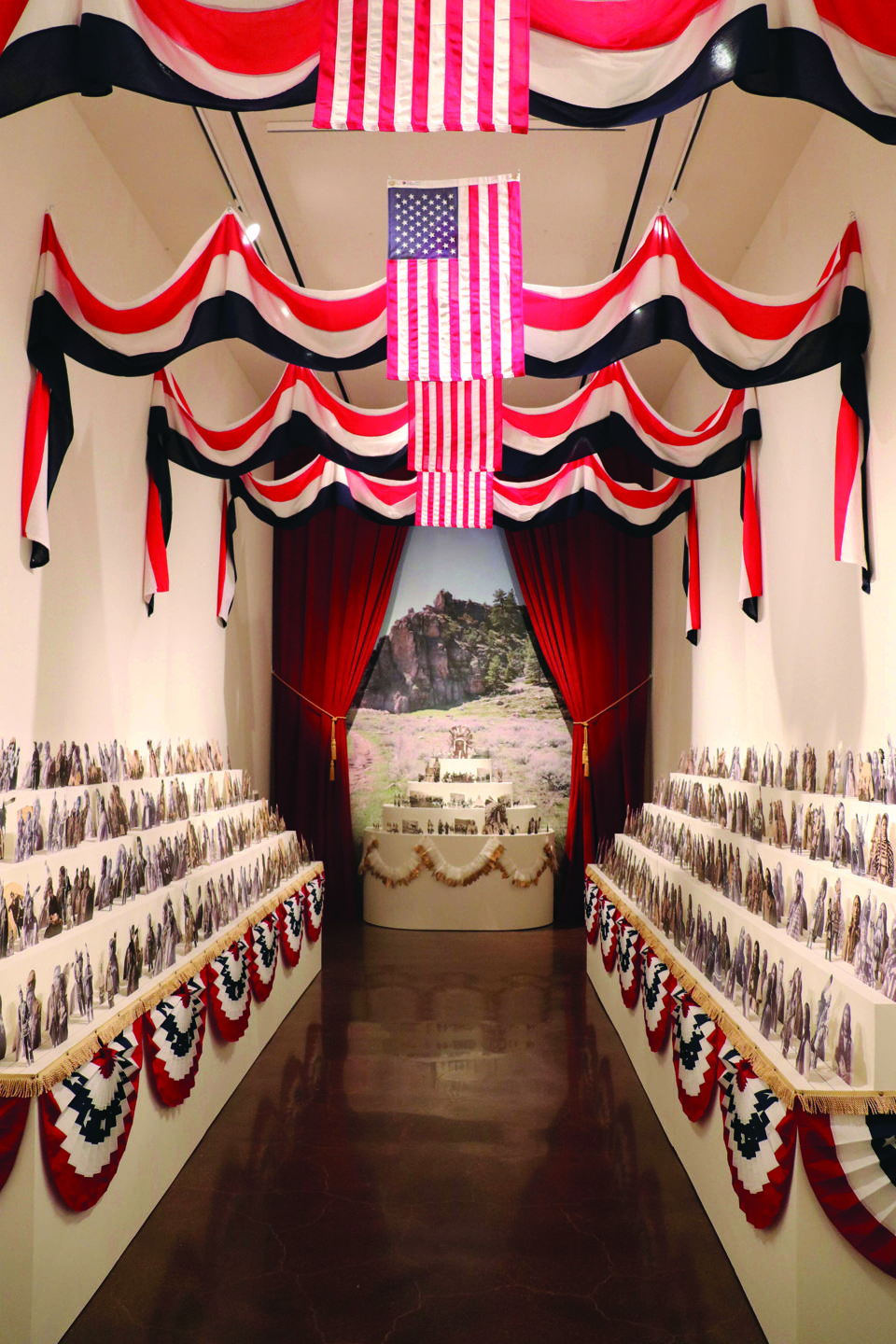 The point being made was clear: American technology and Manifest Destiney had prevailed over the hopelessly nonprogressive “natives.”

James Mooney, the Smithsonian anthropologist charged with organizing the congress, was explicit in his interest in making the camps, “as thoroughly aboriginal in every respect as practicable,” rejecting delegation members’ contemporaneity according to Annika K. Johnson, Associate Curator of Native American Art at the Joslyn Art Museum. She worked closely with Red Star on the project.

“(The Indian Congress is) quite sharp in its critique of the exploitation of congress members during the fair, who essentially had to perform their identity through staged battles and ceremonies,” Johnson told Forbes.com. “Fairgoers bought tickets to see these staged events and wander through the camps and peek inside people’s lodges, so the Native people were put on ethnographic display. It speaks to the commodification of Native culture.”

Red Star transports visitors to the Expo, recreating a life-size replica booth of the kind that displayed farm produce, accompanied by American flags and fanfare. She has arranged roughly 600 cut-out photographic reproductions of Indian Congress members displayed in tiers along 18-foot tables lining both sides of the installation space. 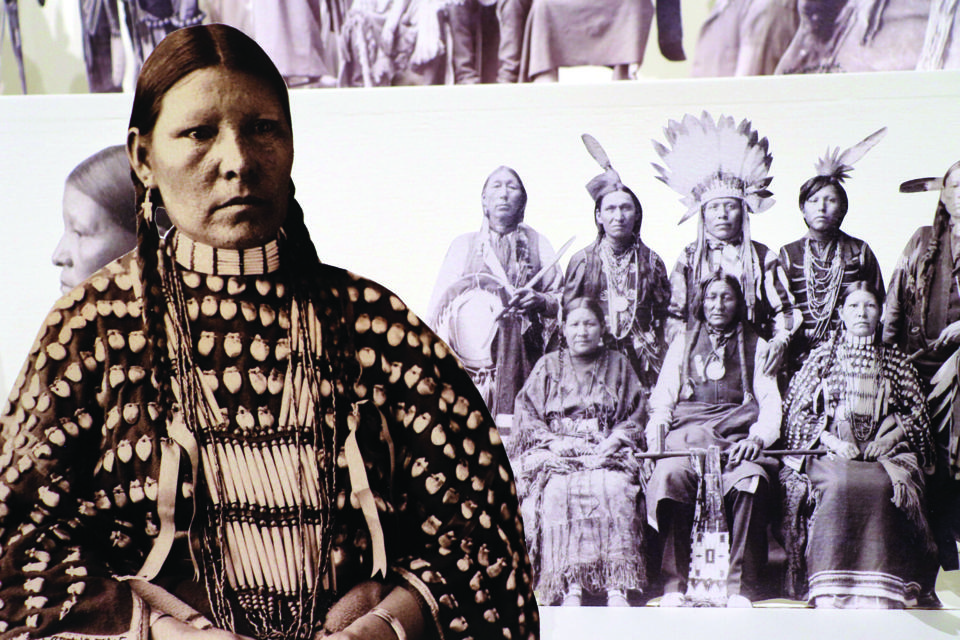 The photos were taken by Frank Rinehart (1861–1928) in his studio in downtown Omaha. Exceptional for his time, Rinehart recorded these individuals’ names and tribal identities, preserving an invaluable record of delegation members and their families.

“The photographs are visceral; each one is faded differently, and the range of sepia and black and white tones create this incredibly dynamic viewing experience,” Johnson said. “Each photo was meticulously cut out by Wendy, so details such as staffs, hair roaches (a type of hair piece), war bonnets and even earrings are defined through the cutout process and cast shadows on the tiered table and walls. The enormous number of photographs is somewhat overwhelming–an intentional decision on Red Star’s part meant to convey the magnitude of the congress and to reunite the 35 tribes that travelled to Omaha from the Southwest to the Great Plains and Canadian-US border.”

The faces, along with their names, make these people individuals. Not “Indians” or “tribes” or relics from a textbook. They are real people who existed. They lived. They died. They loved. They laughed. They struggled. They had parents and were parents.

“Because Rinehart recorded the names of his sitters, you start to figure out who’s related, you can see families, you can see leaders,” Johnson said. “These were important people.”

Presented in this way, their individual suffering at the hands of the United States’ government–which isn’t explicitly shown here–embeds an even more profound dread in onlookers.

“American flags, banners and bunting hang from the ceiling and tables, surrounding the photographs with nationalist fanfare, drawing out the tension between the U.S.’s horrible 19th century Indian policy, and the presence of Indian Congress members at a world’s fair that celebrates the U.S.’s expansion onto Indigenous lands,” Johnson said.

Red Star visited Omaha in December 2019 to begin conceptualizing the project. Over a few days of research, she visited Rinehart’s old studio in the Brandeis building in downtown Omaha. She visited his gravesite and what’s now Kountze Park, where the center of the exposition was. Red Star and Johnson also drove around North Omaha searching for the approximate location of the Indian Congress camp, which wasn’t marked on historic maps of the Expo.

“(The Indian Congress) will be hosted within a mile of the original Indian Congress camp site,” Johnson notes. “I think (Red Star) saw it as an extraordinary opportunity to create a site-specific work, and one that is very much connected to the Crow Reservation where she grew up in Montana.” 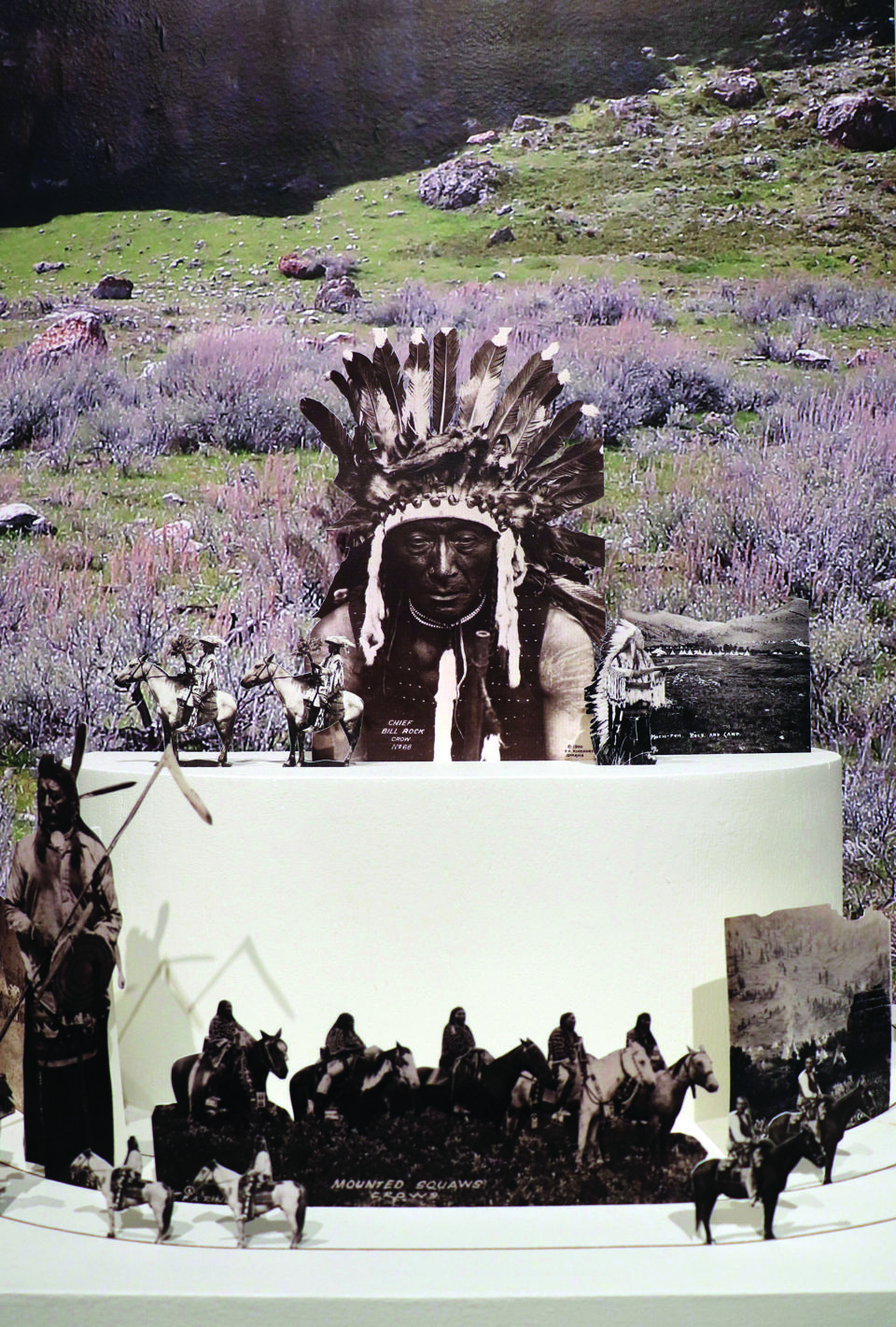 One year after the Indian Congress, Rinehart photographed Apsáalooke people on their homelands in Pryor, Montana—Red Star’s hometown.

For The Indian Congress, she positioned this second group of portraits at the gallery’s rear against the backdrop of Baápuuo (Where They Shoot The Rock), a sacred site and home to powerful beings known as the Awakkulé (Keepers Of The Land).

“The connection may be fortuitous, but Wendy really does the archival work to draw the connections and figure out the story, and this process is a major component of her work,” Johnson said.

Less than a mile from the Joslyn, art lovers will find the Kimpton Cottonwood Hotel, a $75 million reinvention of the iconic 1915 Blackstone Hotel.

Opened in November of 2020, the hotel’s 70+ piece art collection, produced entirely by Nebraskan artists, offers “a certain autobiography of Omaha,” in the words of community artist and hotel curator, Watie White. One of the five property-specific commissions is by Omaha-born fiber and textile artist, Celeste Butler, who created a dynamic quilt display that incorporates materials from the original Blackstone Hotel, including a rusted shower drain and cottonwood leaves.

The property was declared an Omaha Landmark in 1983 and listed on the National Register of Historic Places in 1985; design teams worked in concert to preserve the integrity and spirit of the original 1915 Blackstone Hotel. Hand-carved terra cotta columns, a marble staircase, original tile and hardwood flooring, and all of the hotel’s 800-plus windows have been meticulously restored.