At the Masters of the American West exhibition in February, the Autry Museum of the American West presented a discussion that focused on the “New West” that seemed to mostly address work that had been created in the last decade. Outside the theater after the event, painter Howard Post had a chuckle: “They’ve been calling it the New West for 50 years,” he said. “Is it really new anymore?”

Post was making a playful joke, but he had a point. Mostly that contemporary, forward-thinking Western painters had been around before, including Woody Gwynn and Fritz Scholder, and several who were even still working, such as Ed Mell, Billy Schenck and Post, the Tucson painter who uses his light palette to create beautiful Western scenes that are unique to the Western art world.

The contemporary Western artist, whose works have captivated collectors for decades, will be showing a new collection of small works in a show opening September 15 at Medicine Man Gallery in his hometown of Tucson. “All of them are small, some 9-by-12s and several 8-by-16-inch paintings,” he says. “I’ve been having fun painting in that wide format. It really lends itself to nice compositions.” 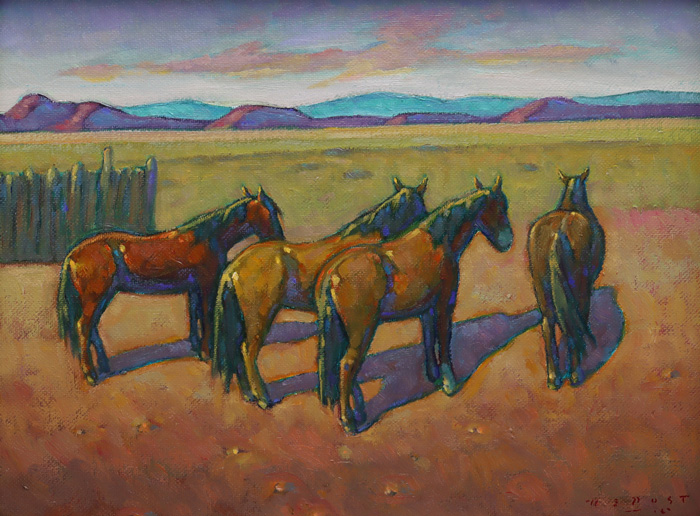 Post, like many artists around the country, has been waylaid in his studio by the pandemic. He’s still working, of course, but he’s not leaving the house for much more. “I’m fairly used to working by myself all day almost every day, so my routine hasn’t changed much,” he says. “Where it hurts is missing the shows, including the Prix de West. They did the awards ceremony for that and it was all on video. It was very strange. I think we all miss getting out and seeing the artwork and meeting our artist friends.”

When asked if the mood of the country, especially the cabin fever that comes with the pandemic, if that seeps its way into his work in any way, Post says he’s good at separating himself from the outside world, a possible byproduct of his illustration days. “I’m not a painter of current events or psychological events. There is no shadow over my shoulders, and nothing is ever dripping down into my color palette,” the painter says. “I’ve been painting a long time, so things may annoy me, but the never come into the studio with me.”

Post, a third-generation Arizonan, has had a long history in Tucson that stretches back to his grandparents, who settled in the Southern Arizona city while on their way to Mexico. Later they were run out by Pancho Villa, but returned to begin their lives again. Post grew up on a farm and competed in rodeos, and always wanted to be a cowboy. After college he was an illustrator in Salt Lake City and worked somewhat closely with Arnold Friberg, Kenneth Riley, Tom Lovell, Harry Anderson and a young Gary Ernest Smith, who shows with Post still today. By 1975 he had taken a teaching position back in Tucson, where his thoughts turned to his own work. And five years later he went all in on his art career. 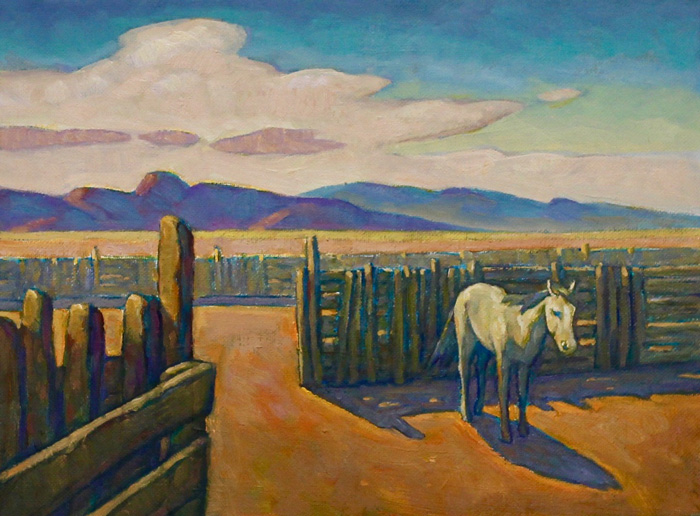 Recently Post had a chance to revisit his childhood home, which is now part of Tucson’s Brandi Fenton Memorial Park. After his family sold the home and property that belonged to his parents, it was leased to the art group SculptureTucson, which is now using it as their headquarters. At an open house, Post was an invited guest and he strolled through his old home, remembering places where he had hung his art. “It was pretty cool to see it as a place for art,” he said at the time.

These days, Post is still painting the parts of the desert that interest him, namely horses. And he’s painting them through an abstract lens and his unique sense of color. “I just love the corrals and the abstract patterns you get,” he says. “Even the land has a lot of abstract quality to it, and it’s that kind of stuff that really catches my eye.”

He seems hesitant in talking about his own work. It could easily be modesty, or just an unwillingness to explain everything. Or a little of both.

“I guess it’s an ego thing. I don’t want to go on all about my work, because it seems like I’m talking about myself. I also think it takes the fun out of it for the viewer. They want to interpret it for themselves. Unless it’s a historic piece with a whole story behind it, most paintings have a mystique to them. They can suffer if you overclarify everything in it,” Post says. “For me I want to focus less on what it means and more on the abstract qualities, the design elements and accidents that happen with nature and animals.”