Hampton Sides has tackled a wide range of historical subjects in his best-selling books, from World War II prisoners of war and commandos fighting their way to the Korean coast to Arctic explorers and murder investigators on the trail of an assassin. History is his playground.

On August 28, Sides will bring his deep love of history to the School for Advanced Research’s virtual forum Celebrating Three Years of Creative Thought, an online event that will allow guests the chance to mingle with experts in a variety of fields as they use social sciences, anthropology and, in Sides’ case, history to answers questions that relate to the modern world. Both Sides and SAR are based in Santa Fe and both share similar missions. 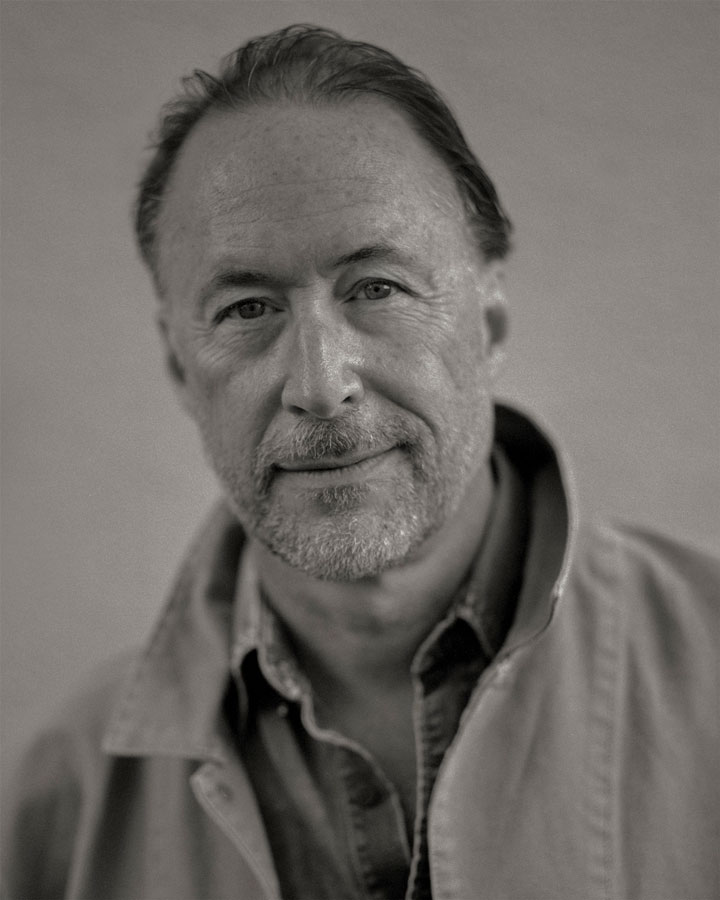 “All my books dovetail perfectly with the mission of SAR. What they’re trying to do and I’m trying to do are essentially the same thing,” Sides says, adding that guests who are placed in his “Zoom room” during the virtual event can expect to hear about his experiences writing his best-selling books and about challenges that come with narrative history. “Certainly the process of doing narrative history will come up, as will the reckoning that is happening right now with historical figures, particularly the pulling down of some of the iconography that is offensive to some people.”

Sides is referring to all historic monuments, but also one specifically, the Kit Carson obelisk in downtown Santa Fe. Carson, the famed frontiersman and trapper who had a long and violent history throughout the West, was a central figure in Sides’ 2007 book Blood and Thunder: The Epic Story of Kit Carson and the Conquest of the West. To many Carson is a classic Western folk hero, but to Native Americans, particularly the Navajo people, he was a cold-blooded killer whose reign of terror in the West is another dark stain on American history. The obelisk that bears his name is currently slated to be removed.

“My belief is that we must take these steps now because they are the right thing to do,”

Santa Fe Mayor Alan Webber said in a June article in the Santa Fe New Mexican. “It is a moment of moral truth, and we’ve been called to do it by our Native American colleagues, friends and family members, and it is long overdue.”

The removal of the Carson obelisk was prompted, at least in part, by a petition on Change.org. The petition calling for the monument’s removal lays bare a litany of Carson’s crimes on Native Americans: “In 1863 during the Mexican-American war, [Carson] sought out a merciless mission to kill Native Americans and relocate them into reservations. When the Native Americans refused this confinement, he murdered them, burned crops, destroyed villages and slaughtered livestock. 8,000 Native Americans were kidnapped and forced to transfer to the Bosque Redondo Reservation known as The Long Walk. He terrorized the Navajo lands and is still seen as a hero in many history books and is still overlooked and detached from his inhumane behavior. This monument is a great example of the inability of Santa Fe to recognize and empathize with the horrific message of this statue. Let’s ban this monument as well as understand how to recognize injustices in history that exist today.”

Sides can see Carson from both points of view, the Western folk hero and the merciless killer who sent Native Americans to one of their darkest chapters at Bosque Redondo.

“One of my main narrative throughlines for Blood and Thunder was that Carson was everywhere, and in almost every phase of the Western conquest. He was a nobody in many respects, an illiterate nobody from Missouri who hated the limelight. He had no authority or education. He was an everyman. The book is not an apology or defense of Carson, and I don’t shy away from his violence or his admirable qualities, including him being a loyal father, a loyal friend and someone who had a great many alliances with tribes he was friendly with. He did a lot of heroic things,” Sides says. “And yet he participated in the round-up of the Navajo that is very hard to reconcile with the other Carson. In the present light I get that people don’t particularly want a statue or obelisk honoring him in a public park. I also get that there is a constant tension between history and democracy, and Carson is going to take some hard hits, and deservedly so.”

The author adds: “We’ve hit the reset button on history, and we can’t just look at things from the white guy’s perspective anymore, which is a good thing. I think it will make history more active and more engaging.”

He also adds that he thinks that these statues, such as those of Carson or Civil War generals, should not be destroyed but relocated to more appropriate venues, be it museums, cemeteries or battlefields. “We should also create more statues,” he says. “Statues for people of color, for women, for artists, writers, musicians. We’ve had a lot of white guys with beards on horseback. We should expand way past that.”

Sides says one of the questions he gets most about his writing is how to keep history fresh and alive on the page. “I don’t always know the answer to that question, because it is often more instinctive and intuitive. I don’t always know how to codify what makes it move along on the page. The first thing is character. History moves fast along a page when the reader knows about the person and cares about their fate. I also like to write about movement, whether it’s a road trip, a pilgrimage, a manhunt, a prison break…to have the story framed around movement makes it feel like the story is moving, because it is,” Sides says. “And suspense. It’s always important. It’s amazing how many books list every twist on the jacket of the book. You have to keep your audience hooked for hundreds of pages, so I’ve always tried to make that text very vague.” 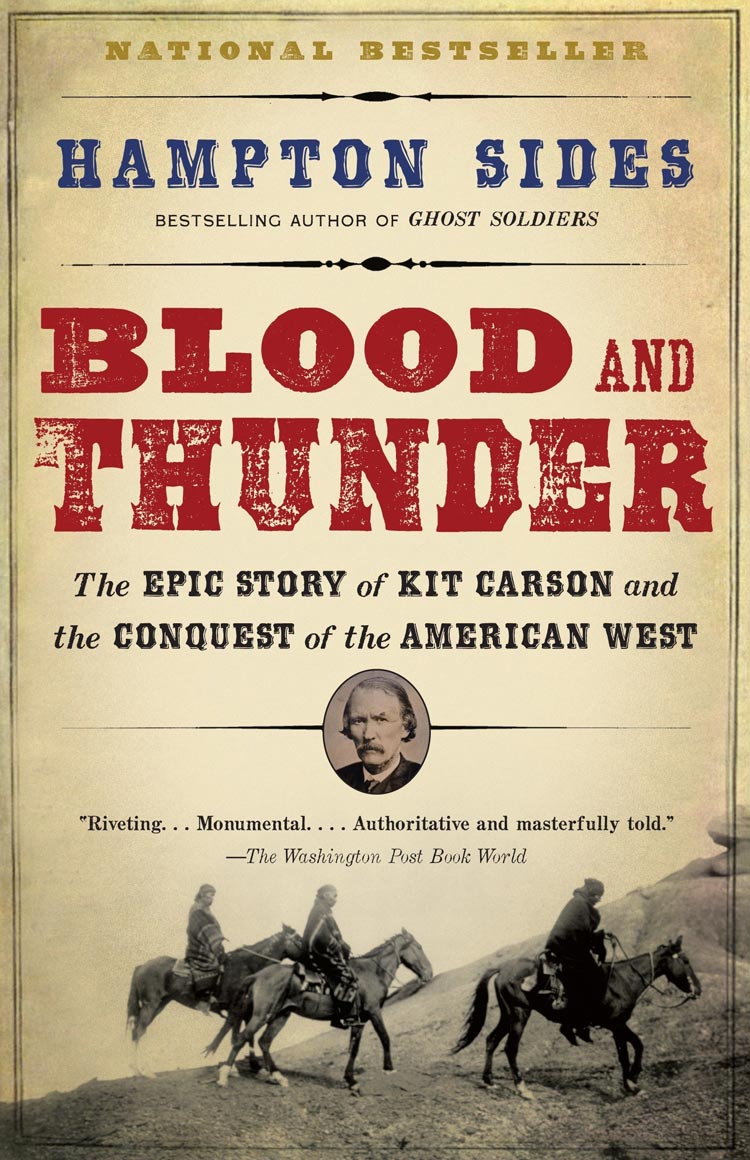 In addition to Blood and Thunder, Sides also authored Ghost Soldiers, about the rescue of the Bataan Death March survivors during World War II; Americana: Dispatches from the New Frontier, a collection of essays about American culture; Hellhound on His Trail, the story of the Martin Luther King Jr. assassination and the hunt for his killer; In the Kingdom of Ice, a chronicle of the first American exploration of the North Pole in 1879; and On Desperate Ground, about the Korean War battle at Chosin Reservoir.

His new book, so far untitled, will focus on the third and final voyage of British explorer Captain James Cook, who trekked all around the globe, including to French Polynesia, New Zealand, Tasmania, Tonga, the entire coast of Africa and crossed through the Bering Strait. “He was the first European to land on Hawaii and, through a complicated escalation of miscues and cultural misunderstandings, was murdered,” he says. “Some academic historians shy away from controversial, complicated characters, especially characters who aren’t all good or all bad. But those are the ones I gravitate toward. They are more dramatic and even cinematic. I think another way to make history come to life is to find a character who is morally ambiguous and write about them.”

It’s these sorts of figures, and the chapters of history that they occupy, that could serve SAR and its diverse array of thinkers, scientists, and authors who flock to its forums. The organization’s goal is to use the past to help inform the future, and to solve modern-day problems. Certainly, Kit Carson and what he did to Native Americans could be brought up in a discussion about Black Lives Matter, equality injustice, police reform or some of the political stances within the Trump Administration. And SAR is betting on it by bringing in Sides, whose books are filled with the kind of history that adds needed context to present-day issues.

“I don’t think I’m consciously picking these stories to write about, but they are certainly more interesting to me, especially when you can see resonance in today’s world,” the author says. “These are things that give a book a pulse.”