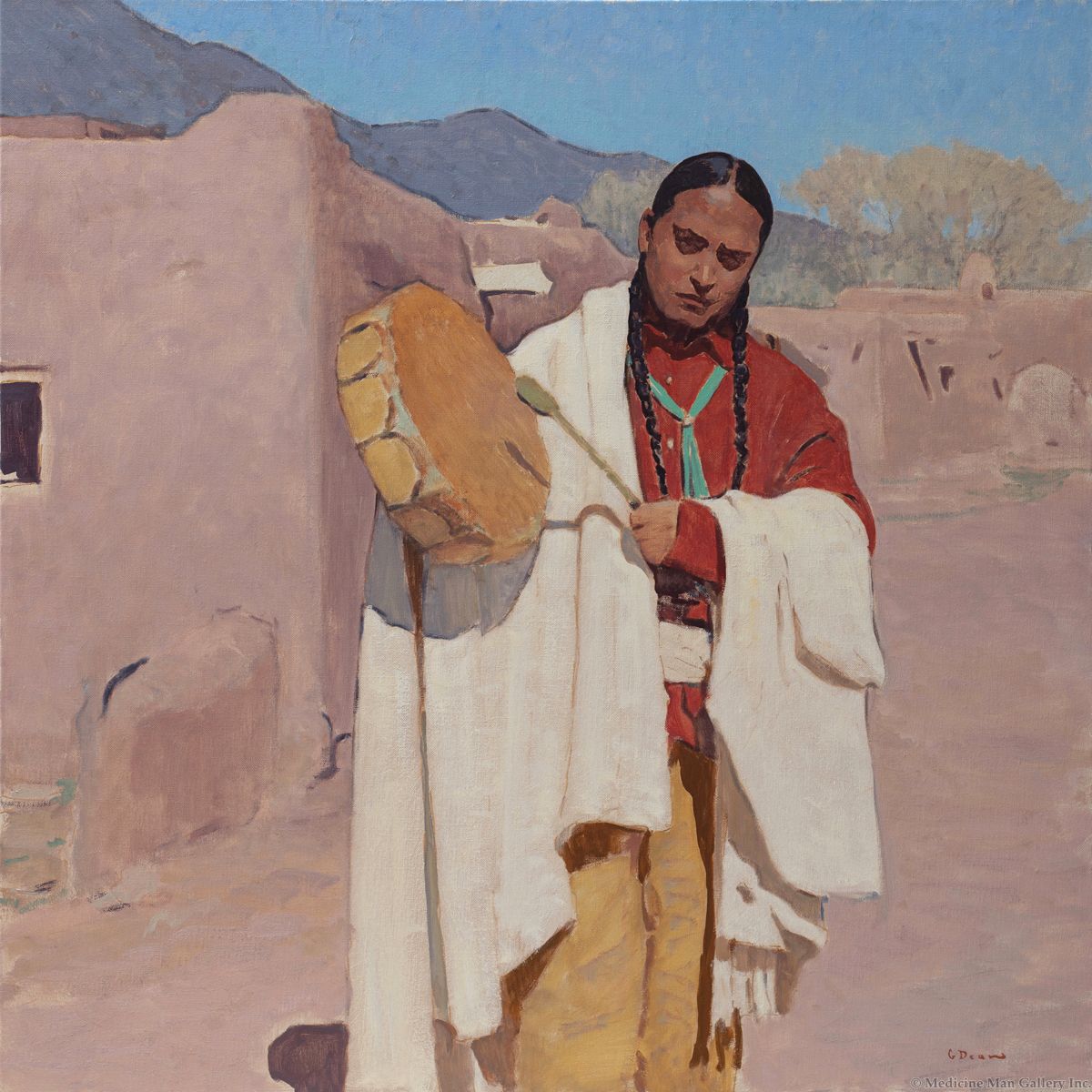 Glenn Dean combines the familiar with the unexpected in an exhibition of new work, “Echoes From the West,” a solo show at Medicine Man Gallery in Tucson, AZ opening November 20. Familiar are images of a serene, vast Western landscape. Lone silhouetted cowboys look contemplatively into the expanse.

New are his interpretations of Pueblo Indians. Here, the figure, not the landscape, takes preeminence. Dean returns to his time spent living in Santa Fe and personal experiences visiting the Pueblos for inspiration in these paintings.

“The color of it all, and the shapes,” Dean says of his technical interest in depicting the Pueblos. “You get these really muted tones in the Pueblo setting and the Indians are often wearing something colorful, that’s really attractive to me, that contrast. I didn’t paint that subject when I lived (in Santa Fe), but I have always been inspired by it – going that route now (feels) like the right time.”

A 40x40 inch painting of a Pueblo Indian, Taos Drummer, represents the largest scale of work found in the show. Smaller works down to 6x10 inches are featured as well.

Dean didn’t always live among the dramatic Southwestern scenes found in his paintings. In fact, he was born and raised in Torrance, California. Dean believes his removal from the minutia of daily Western culture helps him better capture the essence of what he paints. 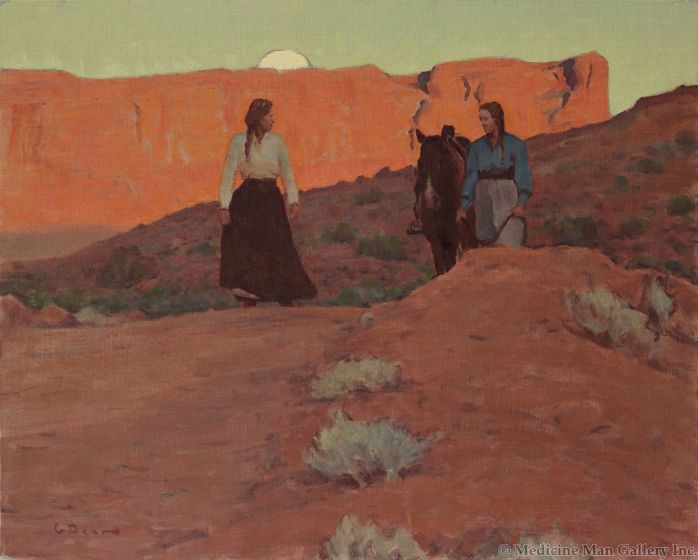 “I didn’t grow up on a ranch. I didn’t grow up around horses. I’m not working with (Western motifs) closely in terms of my lifestyle, so I can see it more outside of the details,” he explains. “Someone growing up in that might be interested in all the tack – or whatever it might be – where I am removed from that aspect of it so I can just think to myself what would look interesting here?”

What Dean lacks in daily proximity to canyons and mesas, he more than makes up for with essence. His ability to authentically capture the light and shadow and “feel” of the Southwest through his unique artistic prism has resulted in his becoming one of the most popular and respected artists working in the genre today.

“There’s a spirit to the West. It’s a romantic thing. It’s a wild thing. All of this captivates my interest,” he says.

There’s a quietude as well.

For many people, Dean included, the West is most captivating when it’s quiet. Dean paints the absence of noise as effectively as anyone working today. To regard his paintings long enough, an onlooker can find him or herself transported to these places where the ears fill with quiet. Where a single bird call can be as pronounced as a gunshot. Where one small rock cascading down a cliff face can sound like an avalanche.

“When I’m out there, that’s what I’m experiencing and that’s what I enjoy,” Dean said. “I want my subjects to reflect that. I feel like when I’m out there and there’s not much going on in terms of noises, it lets your soul breathe a little bit. Without overthinking too much of what’s happening around you, you can almost become one with it for a short bit.”

Initially beginning his career as a pure landscape painter, Dean has increasingly found figures appearing in his work, an evolution which began occurring in 2014.

“It felt like a natural progression incorporating a person into the landscape to be experiencing that spirit,” he says. “Somebody’s out there experiencing it so that it’s a more impactful image in some ways than just a landscape, which I still love painting.”

Glenn Dean will be in attendance when “Echoes from the West” opens at Medicine Man Gallery on November 20. 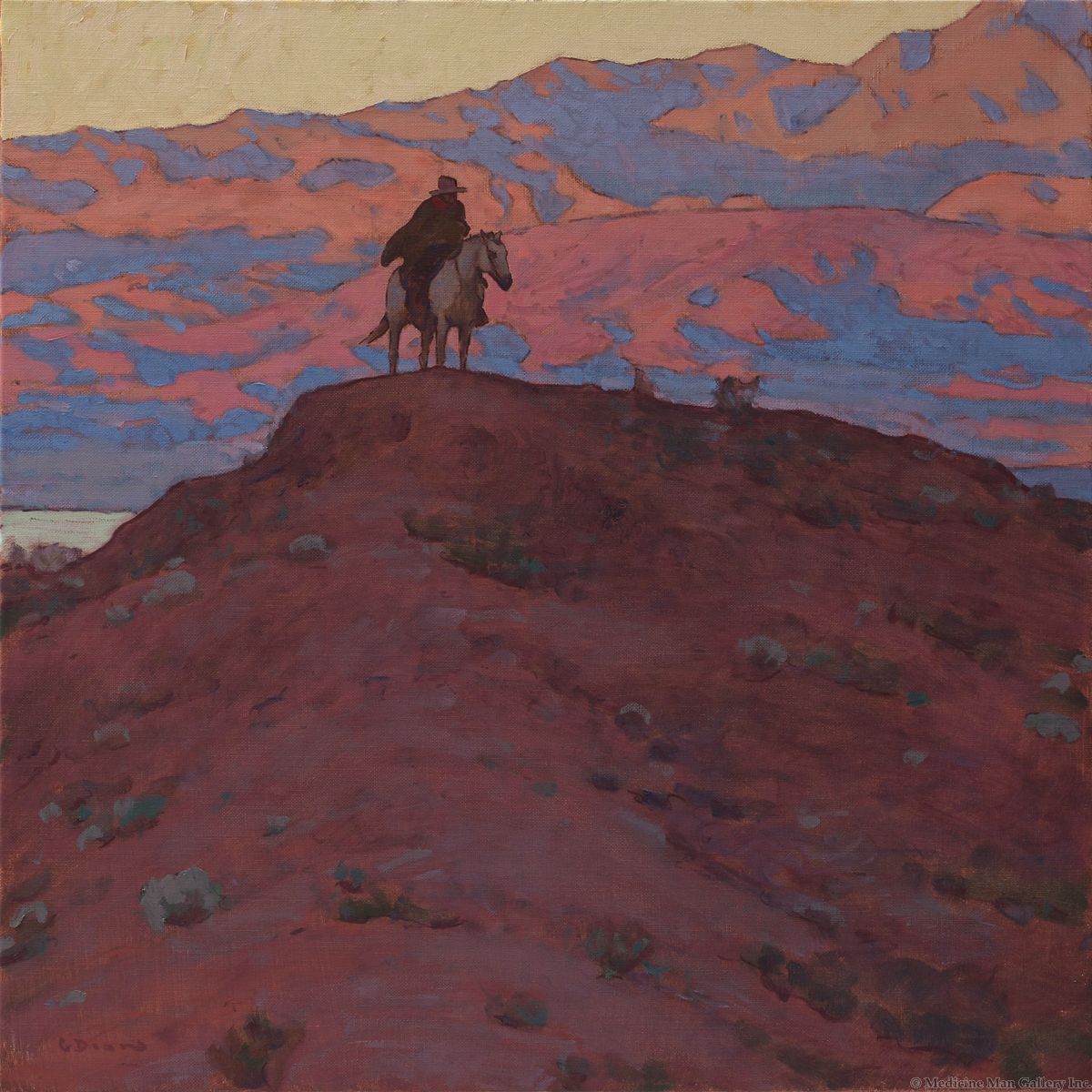