Calling back to his career as an illustrator, Dennis Ziemienski pays tribute to the Southwest with his newest work 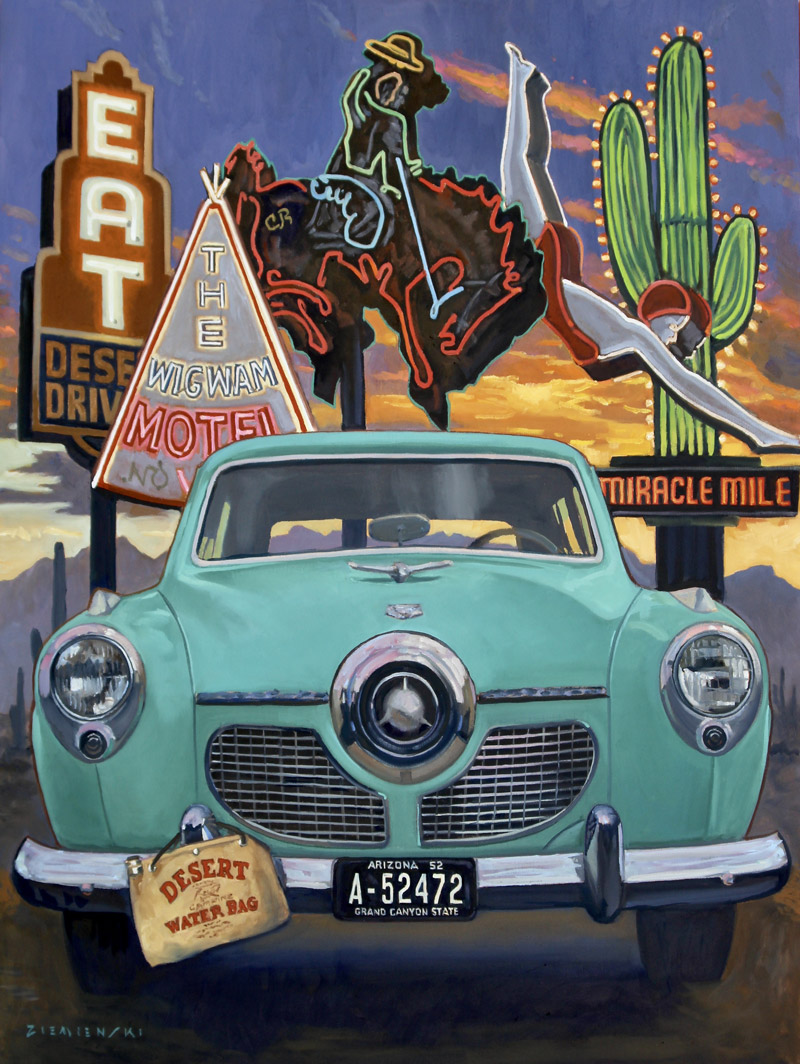 Sitting in front of his easel in Northern California, Dennis Ziemienski is craving travel. Especially as he dabs at his newest works, which are throwbacks to old travel posters, complete with bold lettering announcing places like Monument Valley, Saguaro National Park and “Explore the Grand Canyon.”

But, of course, travel is a luxury these days. A luxury that was easily taken for granted before 2020, when the pandemic swept through the country and made travel perilous at best, deadly at worst.

“We certainly wish things were different, but we’re all good here so I can’t complain too much,” Ziemienski says from his studio in Glen Ellen, California, which is located in the Sonoma Valley. “At the beginning of all this, my wife and I were worried the bottom would fall out of everything because no one was going anywhere. But then, on the contrary, things held up. It seems people are still interested in art and so they turned online to look for it. I guess when you’re looking at your walls all day, you start to wish you had something new there.”

Ziemienski has used his time at home—his studio is in a converted garage behind the house; “my commute is about 100 feet”—to keep his nose down and the work flowing. His new show opens March 20 at Mark Sublette Medicine Man Gallery in Tucson, Arizona. The title of the show, Grand Canyon State, and theme will be of interest to Medicine Man’s Arizona collectors, as well as those who treasure images of the desert state. The works are pure Ziemienski: timeless Western images that hit a sweet spot between the 1910s and 1930s, iconic subjects, larger-than-life figures and those warm, sun-drenched colors that seem to radiate off the sand and rock. The inclusion of lettering and other text link the paintings back to the artist’s illustration days, which are never far removed from any of his works. Before becoming a fine artist, Ziemienski worked in New York City as an illustrator, and his campaigns included images for the Super Bowl and the Kentucky Derby.

“Illustration is great because it allows for so much storytelling, and I like those qualities in these works, but also in other artists’ works. Some of my best artist friends are illustrators,” he says, adding that a colleague recently did the paintings that feature prominently as book illustrations in the Coen Brothers movie The Ballad of Buster Scruggs. Ziemienski also adds that his own home is near the home of author Jack London, whose adventure stories were often the source of many great illustrations. And then, of course, there is his own work, which seems to call out to old railway posters of the 20th century. “I definitely like the idea of a travelogue, which I’ve done many times for other places, whether it’s Route 66 or Yellowstone or the Tetons. For these Arizona works, it was fun because Arizona is just spectacular. Whether you’re up north in Monument Valley or over in Canyon de Chelly, or down in the desert of Southern Arizona, it’s just a magical place. The cactus, the rock formations, the remnants of time, the bygone days of traveling by car around the country and staying in a big concrete teepee … Arizona is full of fun stuff to explore.”

The show also pays special attention to the Grand Canyon, which Ziemienski lovingly paints with an eye for all the little details that someone wouldn’t necessarily see from standing at the rim. “I believe in getting down in there and really seeing it, which is why I really like the images of the pack mules winding their way down into the canyon. Once you see these things you can just have fun painting them, and even exaggerating them,” he says. “I’ve always been an advocate of blurring the lines, which also relates back to illustration, which was often the this ugly stepsister of art. But if you look at what the great illustrators did, people like Maynard Dixon and others, they abstracted and exaggerated the landscape in really exciting ways.”

And where other artists would stick to horses and pack mules, Ziemienski isn’t afraid to bring the 20th century into his paintings with the inclusion of wood-paneled station wagons, vintage pickup trucks and even airplanes—everything is on the table. He describes what he does as just bearing witness to what he sees, and then painting that.

“Art is observing and then interacting with it as well. You can sit back and look at the Grand Canyon, but if you don’t take a walk down into it—even get on one of those mules and get involved—then you’re only getting half the information,” he says. “I am kind of reluctant to paint something that I have never visited or experienced. The more you observe and witness, the more familiar you get with the subjects. And that only helps an artist.”