Color Riot! exhibits the evolution of Navajo textiles through exposure to synthetic color dyes from 1860 to the early 1900s 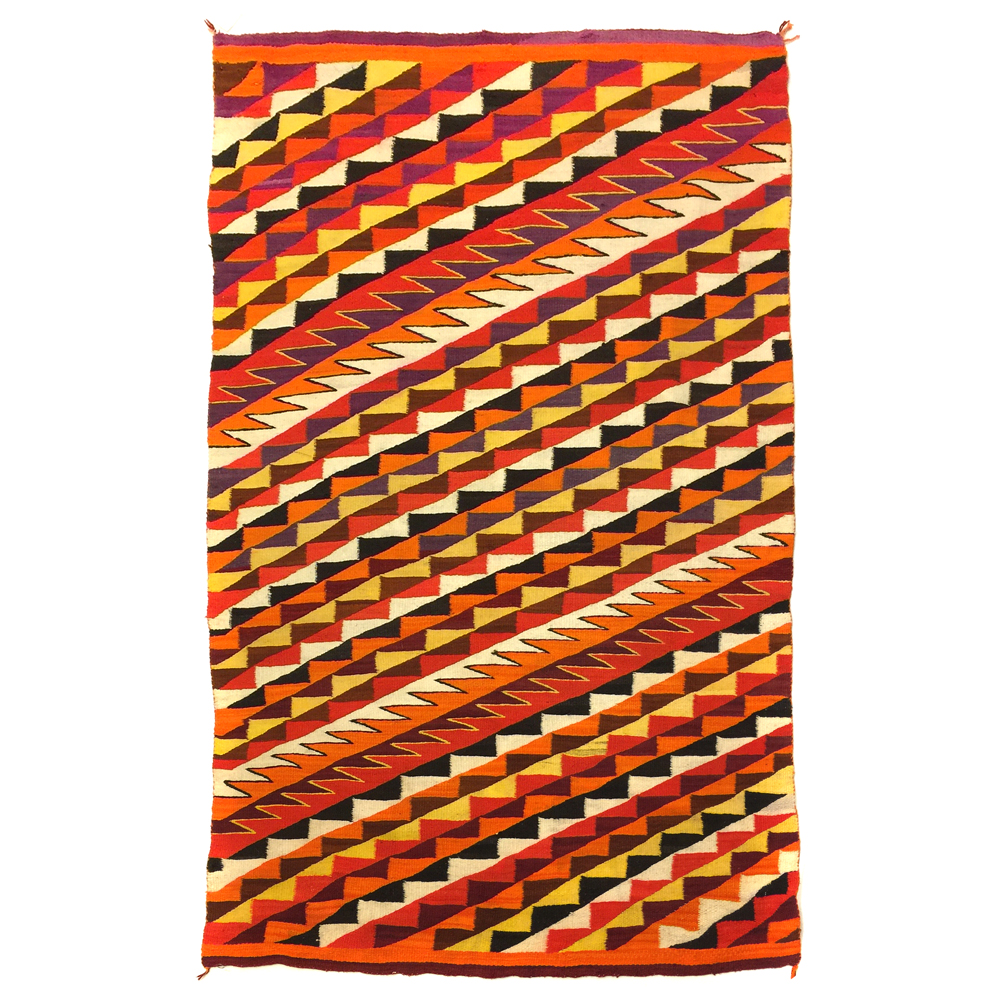 Wassily Kandinsky is widely recognized as the world’s first abstract painter. The first visual artist to completely break away from representation in his artworks.

For that reason, every art history textbook and museum centers him as an indispensable figure of the 20th century.

If abstraction is defined by some combination of dramatic lines, bold coloration, personal artistic expression and coherent composition, perhaps art history should look deeper. Further back and far away from Europe.

Back to the late 1800s and to the Desert Southwest where Diné (Navajo) weavers were experimenting to create blankets which in hindsight appear to prefigure Klint, Kandinsky, Kazimir Malevich, Piet Mondrian and anyone else widely considered a forebearer of abstraction.

Hung on the wall and presented in a fine arts museum as the Museum of Fine Arts, St. Petersburg, (Florida) does now, escaping the conclusion that these blankets belong firmly in any discussion about the origins of abstract art becomes impossible. See for yourself through March 14 during the exhibition “Color Riot! How Color Changed Navajo Textiles.”

“It wasn’t that ‘color’ didn’t exist in Navajo textiles before; it’s more a range of synthetic colors were introduced, many of which were just newly invented,” Velma Kee Craig, Diné, co-curator of “Color Riot!” and Assistant Curator at the Heard Museum in Phoenix, where the exhibit was organized, told Essential West.

A variety of fresh materials came to Diné weavers during this time which is now referred to as the Transitional Period (late 1860s to early 1900s) when referencing their textiles. Craig notes that Saxony yarns became accessible through trade and interaction with the Spanish. Germantown yarns were provided along with rations while Diné were interned by the United States government at Bosque Redondo. Aniline dye packets were marketed and distributed to weavers via trading posts after the survivors’ return to their greatly reduced land base.

Any discussion of the work on view in “Color Riot!,” or the Transitional Period, is incomplete without recognizing the suffering the Diné were experiencing during these years.

Engaging in a “scored earth” campaign which featured the burning of villages, slaughter of livestock and destruction of water sources, American “hero” “Kit” Carson effectively forced the Diné to surrender to U.S. forces. Thus began the infamous “Long Walk.” Between summer 1863 and December 1866, over 10,000 Diné were marched at gunpoint on scant rations up to 450 miles east, out of their ancestral birthplaces to the desiccated expanse of eastern New Mexico and an internment camp at Bosque Redondo.

“Navajos’ lives were uprooted, fractured,” Craig said. “They were forcibly removed from what they’ve always known and accepted as their sacred and protected land base, made to walk 300-plus miles to live in a prison encampment in a foreign and desolate place where they couldn’t make or produce anything that could sustain their weakened and tortured bodies.”

Exactly how this experience manifested itself through artwork is impossible to know, but it undoubtedly had an impact.

“What do people do in times like these? They might, if allowed, turn to self-expression,” Craig suggests. “Navajo weavers have always expressed their innovation and creativity in textiles, especially those created for a market. They have always been willing to incorporate newfound discoveries into their textile creation practice.”

Indigo is one example of this. The transfer to using wool from cotton is another.

“What we see in the textiles from the Transitional Era is weavers whose market and lives had been disrupted, and with newfound access to many different things all in a short time span, taking it all in as fast as it was presented and exploding back out just as fast onto the warped canvas,” Craig said.

“Color Riot!” celebrates the individualism and flair for experimentation in Navajo textiles from the last quarter of the 19th century. Sadly, none of the names of these makers have survived. More than 80 works are included in the show which also features examples from contemporary makers who continue honoring the tradition.

Here’s a primer to key terms, in addition to “Transitional Period,” you will come across when researching Diné textiles:

“Navajo textiles (of the Classical Period) were woven for internal use and also woven to be traded/sold across a strong indigenous network that spanned the Americas. Textiles woven during this time were formatted in landscape orientation, meant to be wrapped around the wearer’s body. They were woven with homespun yarn from Navajos’ own flocks of sheep. Colors came from using the natural colors of the sheep (dark brown or black and natural white) as they were, or by combining or carding together different wool colors to create in-between shades. Navajos also had access to indigo and lac or cochineal to achieve blues and reds.”

See the difference in this video.

“After 1910, we move into the Rug Period, which is a broad time period, essentially running into the present day. It starts, though, with the setting up of non-Native owned Trading Posts at various locations spread out across the newly established Navajo reservation. When these traders decided to market Navajo textiles to Euro-American buyers, they suggested weavers incorporate into their textiles certain design elements or colors or yarns. Weavers accommodated to various degrees if they chose to work through the trader as middleman. These trader-inspired regional designs, as I and my colleagues refer to them, are still widely woven. They are what most people think of when they think, “Navajo weaving.” They are even, a lot of times, given the label, “traditional.” My question is: ‘what is even traditional?’”

Navajo Rug vs. Navajo Blanket (as explained by Mark Sublette):