'Subversion and Spectacle,' the artwork of Clark V. Fox on view in Houston

Allow these influences to simmer over a 60-year career and serve in a whopper of an exhibition.

Born Michael Clark (Austin, TX; 1946), Fox spent the first five years of his life in Honolulu before his family skipped across Texas – Galveston, Houston, Corpus Christi, Hereford, Amarillo. It was out East, however, where Fox found his artistic footing.

He received a bachelor’s degree in fine arts in 1969 from the Corcoran School of Art in D.C. and soon became involved with the Washington Color School. This brought him to the attention of James Harithas, then Director of the Corcoran Gallery of Art, now Director of the Station Museum and co-organizer of “Clark V. Fox: Subversion and Spectacle.” Harithas became Fox’s mentor, introducing him to the art world by letting the aspiring artist tag along to parties, exhibition openings and studio visits. The two remained close over the proceeding 50-plus years. 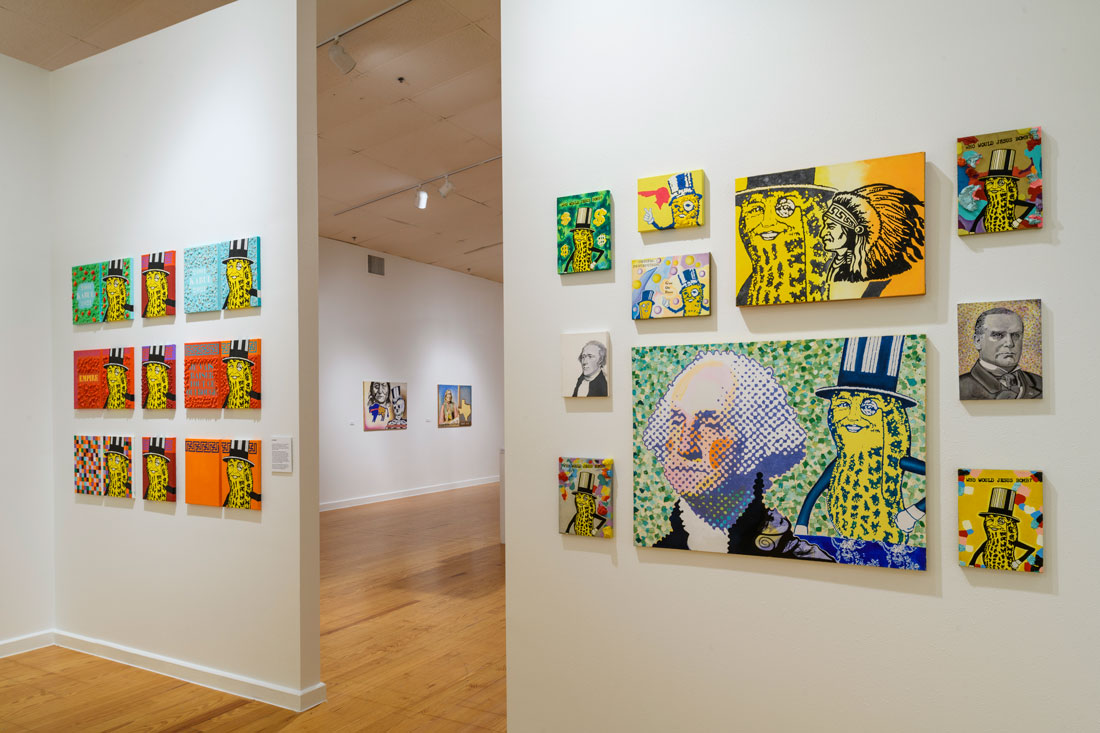 The most comprehensive survey of Fox’ work to date, the presentation of paintings, prints, assemblage and one exuberant, Technicolor striped 2004 Cadillac Coup de Ville occupies the entirety of the museum’s gallery space. Clark’s consistent mixing and appropriation of styles and movements as a political statement are made clear.

George Washington is a persistent figure, so is Mr. Peanut. Fox uses Washington as a symbolic protest against the country’s treatment of Native Americans. What about Mr. Peanut?

“I supposedly started drinking beer and got drunk the first time when I was two-years-old,” Fox, who’s been sober for more than 40 years, said. “(My dad and his Army buddies) would have these parties and they had Planters peanuts, so I was nuts about beer and peanuts and Mr. Peanut and it all just evolved in the early 70s to go along with my pointillist paintings. I moved into making a socio-political statement using Mr. Peanut… how the upper class has taken over the art world and basically destroyed it; they've capitalized on it, branded it, and commoditized it and I'm fighting against that.”

Mr. Peanut came to represent capitalists in Fox’ work due to the character’s top hat, a signifier of wealth in figure paintings from the late 19th and early 20th centuries.

Mr. Washington and Mr. Peanut reflect the artist’s deep Pop art roots. The stylized, idealized, mid-century advertising aesthetic appropriated by Pop artists to comment on America’s consumer focused society pervade the sprawling presentation. Fox came about his Pop art proclivity honestly. He spent his first year of college at Pratt Institute in Brooklyn (1965-66) hanging out for the summer with his girlfriend and Andy Warhol at Warhol’s famed “The Factory” studio.

Warhol represents just one of many iconic figures from art history Fox has crossed paths with, and perhaps not the most remarkable, a list that further includes Marcel Duchamp, Barnett Newman, Dan Flavin and Fritz Scholder to name a few. Jimi Hendrix too. 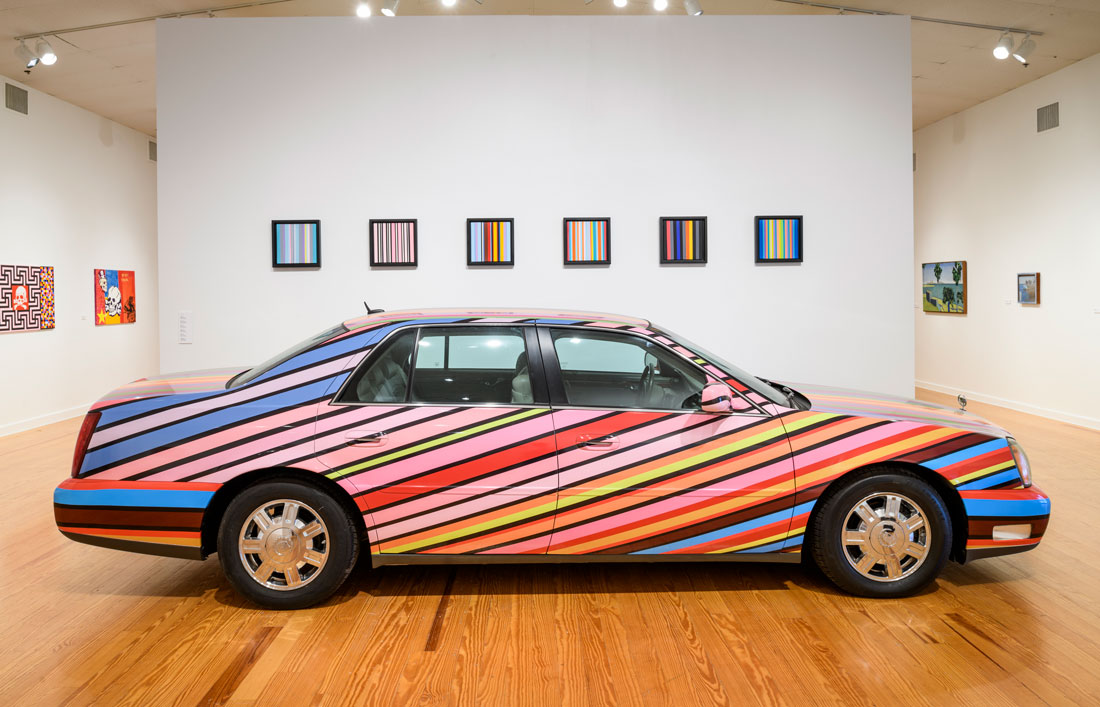 Fox’ Native American background has charged his art practice and activism since the beginning. The Clark side of his family traces its ancestry back to Jamestown, VA in early 1600s. His distant relatives intermarried with the Powhatan Tribe, which he credits for allowing them to survive in the area, but also resulted in their having to leave Virginia in the 1700s to avoid being imprisoned or hanged for possessing Indigenous blood. Next was Tennessee where they further mixed with Cherokee. Members of his family were later sent on Trail of Tears, family lore having it that they escaped after crossing the Mississippi River to hide out and live off the land in Southeast Missouri.

Splintered through the centuries and intermixed with a variety of tribes, Fox’ efforts to trace a family lineage directly connecting himself to a specific nation or reservation proved impossible. Fox is not an enrolled member of any tribe, nor does he promote his association with any specific Native people.

“My mother always told me, ‘Never forget that you’re an Indian,’” Fox remembers, a confusing statement at the time. “It really is kind of bizarre if you're in the white world, what can you do when you have a lot of this feeling that goes back many generations in my soul, I guess. It puts (me) in a weird position where I only do my Native American paintings when I get this strong feeling.”

Another anecdote from an extraordinary life, this one connected to his Native American heritage, placed Fox on Alcatraz Island during its occupation by Indigenous activists for a year-and-a-half in the early 70s. An art patron of his from San Francisco took him out there.

“They were tough people, but a lot of them were living in terrible standards wherever they came from,” Fox remembers. “They were nice enough; I sort of felt like a tourist, but I felt like, ‘Wow, this is the real deal.’”

His taken professional name reveals another exceptional story connected to his Native ancestry. “Fox” came to him from a message received in a séance by a Native man named Running Fox. The very next day he went to the National Gallery in D.C. and saw a George Catlin painting titled The Running Fox on a Fine Horse – Saukie. He considered it a sign.

“I’ve had a very ‘woo woo’ life,” Fox admits. “I can see ghosts and stuff like that; people have woken up in my apartment here in New York and they've seen Native Americans from way back walking around in the rooms – really freaked people out that don't even believe in ghosts.” 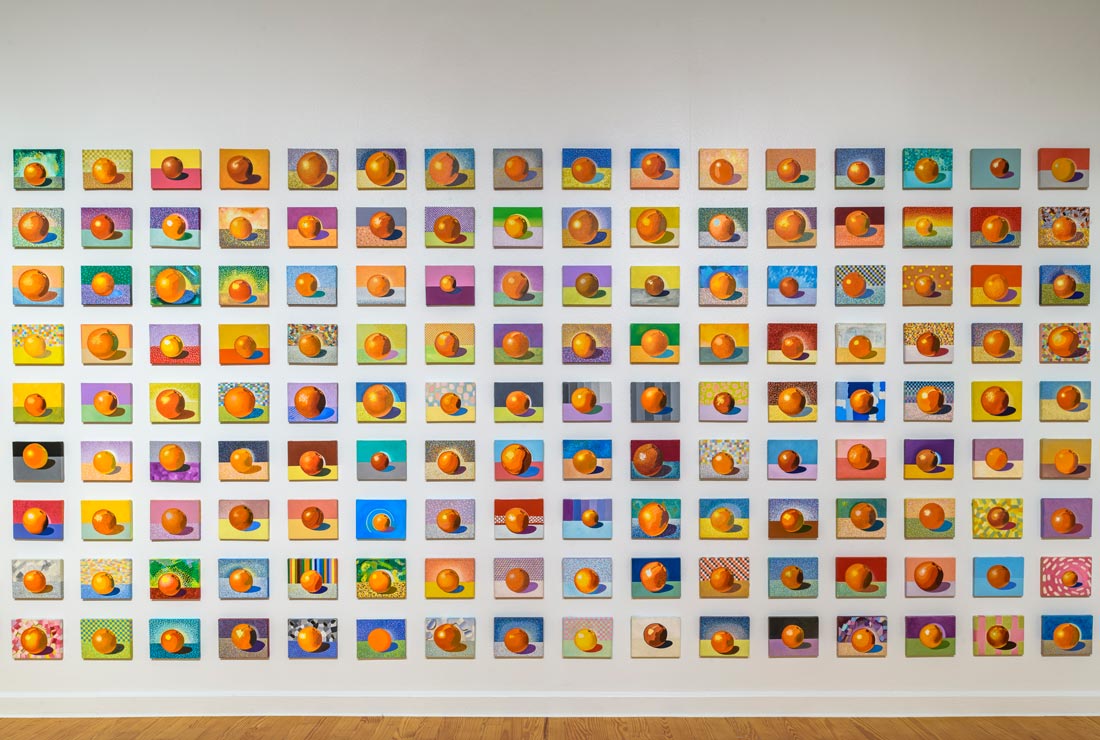 Truth to history, a principle perhaps never valued in the popular shaping and retelling of the American story, a doctrine increasingly beset upon in a nation simultaneously and with equal zeal attempting to reveal and conceal its true history, a battle set against the backdrop of a former president continuing to tell the nation not to believe what it saw with its own eyes.

See the truth and the lies in Clark V. Fox artwork at the Station Museum through September 25, 2022.