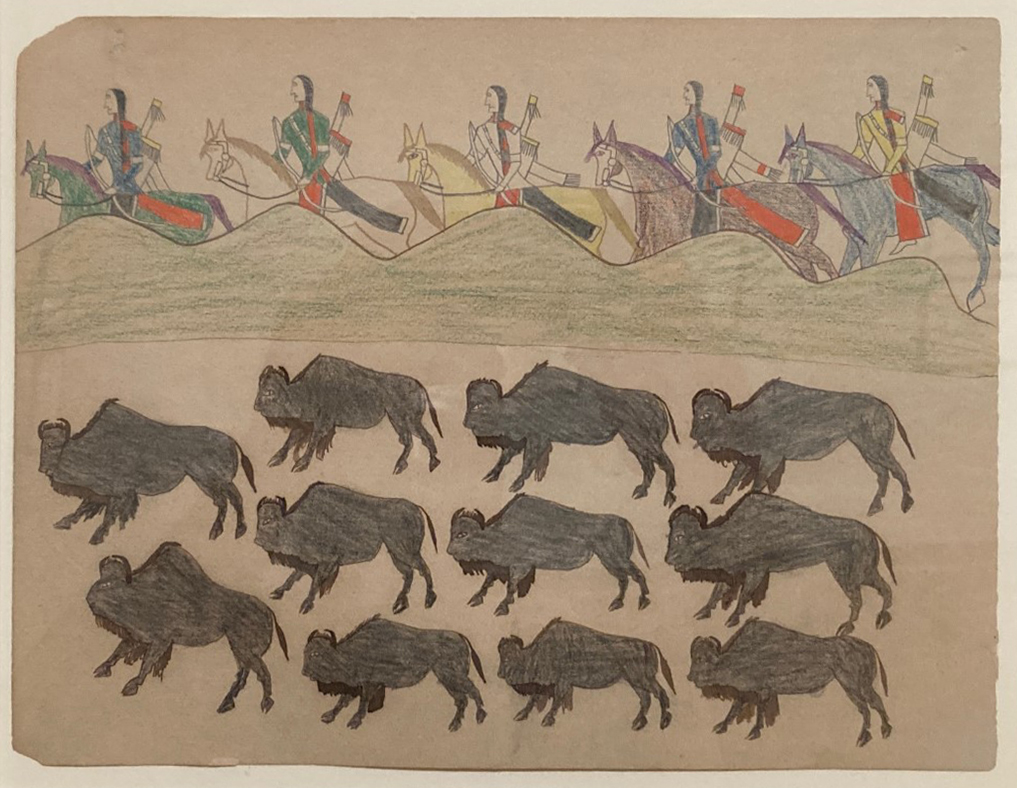 Traumas of Native American removal from the East to the West by the federal government in the 19th century are well known. Everyone has heard of the Trail of Tears. Far less well known are the examples of Native Americans removed from the West and sent East. One of those stories is being told now – from the Native perspective – at the Cummer Museum of Art and Gardens in Jacksonville, Florida.

These particular people – Cheyenne, Kiowa, Comanche, Caddo and Arapaho warriors – were taken off their homelands on the Southern Plains and sent to Ft. Marion in St. Augustine, Florida, 40 miles south of the Cummer Museum.

“Imprisoned but Empowered: Cheyenne Warrior Artists at Fort Marion” brings together a large selection of notebook-sized, color pencil on paper drawings from a handful of Cheyenne depicting their life at the prison camp, but also their life of freedom prior. The artworks come from the Arthur and Shifra Silberman Collection at the National Cowboy & Western Heritage Museum in Oklahoma City.

“Imprisoned but Empowered” was curated by Gordon Yellowman, an artist, university instructor and Director of Language and Cultural Programs for the Cheyenne and Arapaho Tribes, of which he is an enrolled member. The drawings on view here have never been exhibited from a Native perspective previously.

This groundbreaking presentation represents one important step of what must be countless more in allowing indigenous people – or Black people or Latinx people or immigrants or women or the disabled – to tell their own stories. To wrest their narratives away from the dominant, white, patriarchal, colonial perspective that has shaped them – mostly inaccurately – for generations.

This story picks up in 1875. Following the Red River War, the United States government ordered the arrest of 72 Cheyenne, Kiowa, Comanche, Caddo and Arapaho warriors. Taken from their families, shackled, loaded on to trains and sent east, most understandably assumed they were being sent away to die. Nearly four weeks later, they arrived at Ft. Marion, their home for the next three years.

Twenty-six of the prisoners, including 15 Cheyenne, would share their experiences in drawings; the color and condition of those on display here is astonishingly good considering their age and material.

What did they draw?

Prison life. The black spiral-painted St. Augustine lighthouse, now a tourist attraction. The pictures come to life, however, when the Native artists recall scenes from their free lives on the open plains.

The vibrancy and detail with which these artists share scenes from their previous lives – the regalia, the markings on horse and tipi, the patterns on clothing – all drawn exclusively from memory, provide unique, first-person insight, into these cultures.

These drawings recount movement, freedom, joy, loved ones, happiness. All of which was taken away, specifically for these men with their imprisonment and removal to Fort Marion, but more generally as well for the vast majority of Native people following contact with colonial settlers, their army and government. 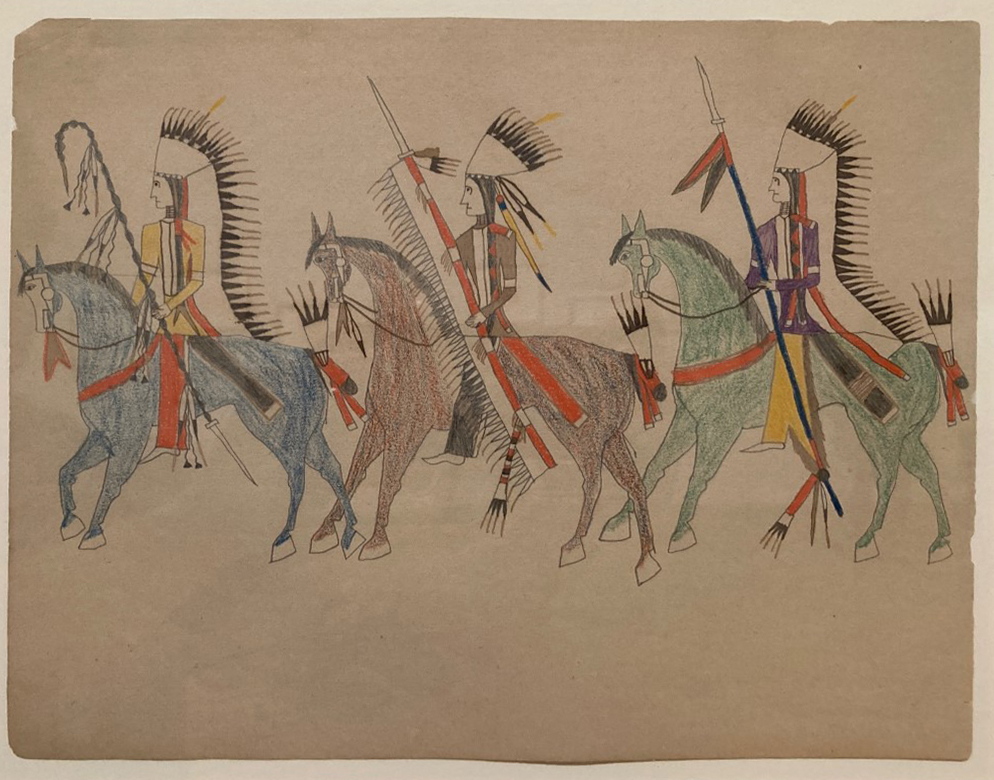 Through that prism, these drawings are heartbreaking. Spend time in the small gallery where these works are hung until you connect to that emotion. Being shown are the attempts of these prisoners to recall those happier days. They are a therapy of sorts. For themselves and their fellow prisoners. A visual storytelling, a remembrance, a momentary escape to better days.

Imagine yourself as a prisoner of war. Sent far from home and confined in a foreign landscape. Your captors attempting to erase the cultural bonds connecting you to home and family. Your traditional appearance altered, your language forbidden, your clothes mimicking those of your captors.

What would you, as an untrained artist, draw?

You’d draw memories. Memories of home and family. You’d draw what brought you momentary happiness. Nostalgia. You’d let your mind drift from confinement to freedom. To life before it went so horribly wrong. Before the pain. Before captivity.

That’s what visitors to “Imprisoned but Empowered” are looking at in the images of free life on the Plains shared by the artists here. Their best memories. Their best days. Their life before it was destroyed by the white man. Their attempts to bring those times back to reality, on paper.