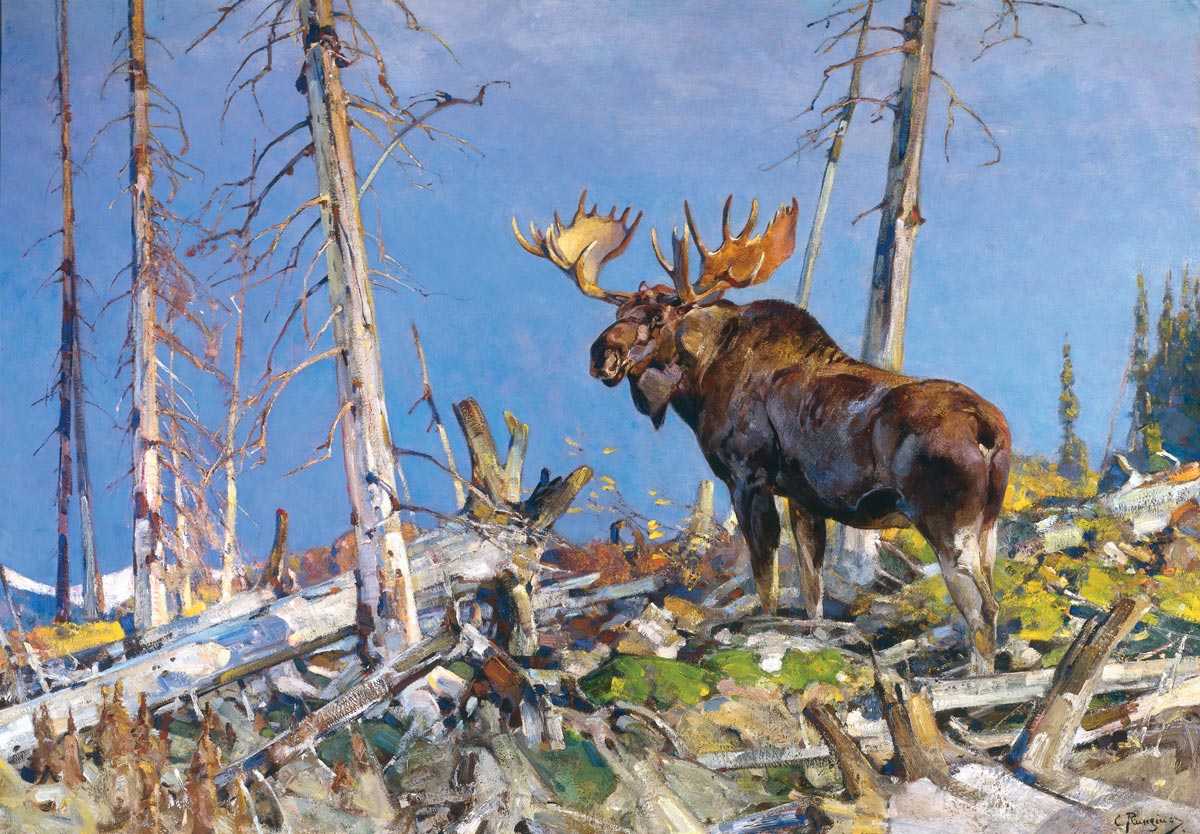 Catalogue Raisonné is the fancy, French, art world term for a book detailing a complete listing of an artist’s work over an entire career, or of a particular aspect or period of their production. Compiling one often requires a decade or more of arduous, dogged, eye-blurring research and writing. They are often produced in multiple volumes.

Pablo Picasso’s catalogue raisonné sprawls out over 33 volumes, each more than an inch thick, detailing some 16,000 artworks. Oooff!

Adam Duncan Harris is knee deep in the process for wildlife painter Carl Rungius (American, born Germany, 1869-1959). Harris served as the curator of art at the National Museum of Wildlife Art in Jackson, WY for 20 years before accepting his full-time position as the Grainger/Kerr Director of the Carl Rungius Catalogue Raisonné in February of 2020. The Rungius raisonné is an Independent Project of the National Museum of Wildlife Art with support funding coming from the Thomas and Elizabeth Grainger Family Charitable Fund and the Robert S. and Grayce B. Kerr Foundation.

Rungius is widely regarded as North America’s premier wildlife painter. Working primarily in the Rocky Mountains in Wyoming and Alberta, Canada, he spent every summer painting and sketching in the high country and every winter in New York City creating finished canvases celebrating the outdoors, nature, and wildlife. The National Museum of Wildlife Art holds the largest collection of Rungius’s work in the United States and is launching this major, multi-year project which will culminate in a published “Rungius Masterworks” book, touring exhibition and online resource.

“For Rungius, we chose to catalogue his finished paintings, illustrations, and sculptures,” Harris said of the project. “There are a large number of plein air landscape studies that we decided not to include at this point, mostly to insure we were not biting off more than we could chew. There is also a great book by Don Crouch that catalogues Rungius's drypoint prints.”

The museum had been discussing the idea of a Rungius catalogue raisonné for years, but this isn’t the sort of effort to be undertaken lightly. Peter Hassrick’s Fredric Remington raisonné and Byron Price’s Charlie Russell raisonné served as examples. Both offered advice on how best to approach the endeavor.

Once committed to the task, Harris created a nine-year timeline for completion. He and his team are coming to the end of year three as 2022 rolls into 2023. Aiding Harris is research associate Melissa Speidel who was instrumental in the Remington raisonné project and is herself the director of the Albert Bierstadt raisonné. To this point, they’ve been scouring Rungius museum holdings, auction records, and published illustrations, adding them to a database that presently records for over 1,000 Rungius artworks.

“I believe we will end up with about 1,200-1,500 records, so there are quite a few paintings out there yet to be discovered,” Harris said. “The most difficult part of the project is finding the paintings that went straight from Rungius's easel or art dealer to a private collection and have remained with that collection ever since.”

That’s where articles like this and advertisements in Western art magazines taken out by the Wildlife Museum come in. Catalogue raisonné’s require a bit of crowd sourcing, participation on behalf of the public to bring long forgotten or never recorded artworks to light. Anyone believing they have such an item related to Rungius is encouraged to email Harris directly at [email protected].

Beyond combing through the Rungius archives at the Wildlife Museum, Harris’ institutional research will also take him to the Glenbow Museum in Calgary which houses the largest museum collection of the artist’s work anywhere along with all of his studio materials, some sales records and correspondence. The Glenbow is currently closed for a major renovation, but once it reopens, a great deal of time will be spent pouring over its archival materials for anything which may have been overlooked.

Admirers of Rungius fortunately won’t have to wait until 2030 to reap the benefits of Harris and Speidel’s work. On May 27, 2023, the Wildlife Museum will premiere “Survival of the Fittest: Envisioning Wildlife and Wilderness with the Big Four, Masterworks from the Rijksmuseum Twenthe and the National Museum of Wildlife Art.”

“In this exhibit we are presenting Rungius's work alongside three of his contemporaries, Richard Friese, Wilhelm Kuhnert, and Bruno Liljefors, all of whom took their academic training out into the field to create a new vision of animals in their natural habitats,” Harris explains. “The Rijksmuseum Twenthe is in Enschede, Netherlands, and has an amazing collection of these artists, as does the museum here in Jackson.”

Rungius has been a well-studied artist for over 50 years. It may seem like there’s nothing left to learn. Harris has already proven otherwise. Beyond simply compiling and cataloging, raisonné projects aim to discover, their researchers sifting through the seemingly infinite minutiae of an artist’s career for singular kernels of new information.

Such was the case on Harris’ recent trip to the American Museum of Natural History in New York which has an enormous Rungius painting backgrounding its Alaskan Moose diorama.

“I saw a report in an AMNH publication from the early 1900s that promoted a bird diorama (Rungius) had also worked on. I headed into the museum with a grainy black and white printout of the bird diorama and within minutes was able to identify it,” Harris said. “Thanks to the talented staff at the AMNH, we found that the ‘Birds of the Rockies’ background was painted by Rungius and first appeared at the museum in 1908. So, here is a Rungius painting that has been on public view since 1908 that no one – or very few people today – knew about. That is the kind of ‘aha’ moment that makes this project so interesting.” 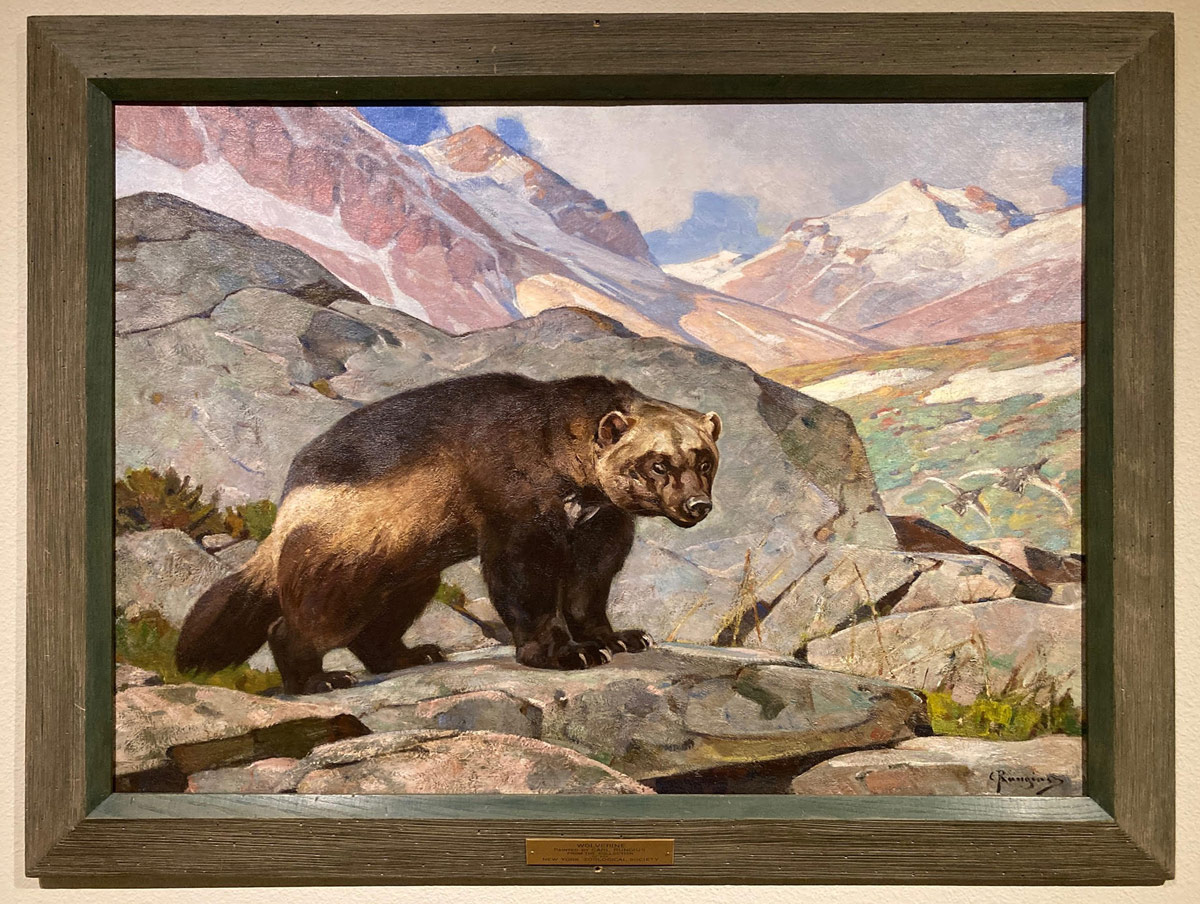