Iconic Charles M. Russell painting is the prize in a new fundraising effort in Great Falls 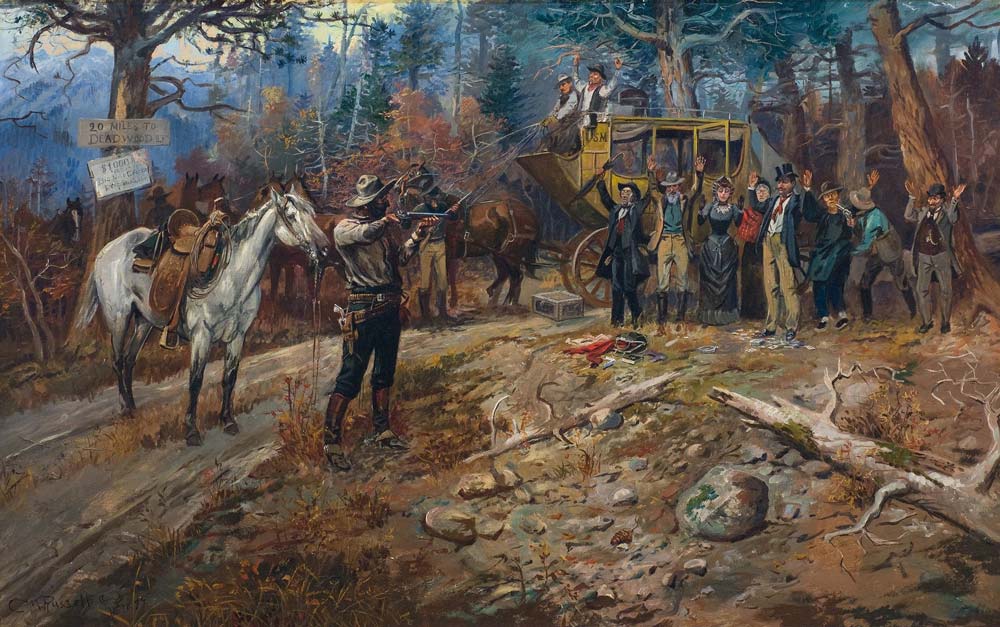 One of the most important and famous paintings by Charles M. Russell is at the center of a new fundraising campaign at the C.M. Russell Museum in Great Falls, Montana. The painting, the 1899 masterwork The Hold Up, was unveiled as the key prize in a new initiative within the Art and Soul Campaign, a $25 million campaign to grow the museum’s endowment.

The new initiative’s push is to raise an additional $2.5 million in pledges. If the goal is met, Tom Petrie, the campaign’s co-chair and respected Russell collector, will hand over ownership interest in The Hold Up to the museum.

“The Hold Up, portraying a real-life 1870s South Hills stagecoach stickup by infamous outlaw ‘Big Nose George’ Parrot and gang, is the most famous piece of the Mint Collection—a vast compilation of Russell oils, watercolors, illustrated letters, and wax models which adorned the artist’s favorite establishment, the Mint saloon in Great Falls,” according to the museum. “The collection was sold in 1952 to Amon Carter, after the passing of the saloon owner and an unsuccessful attempt to raise funds to keep the collection in Montana. Decades later when the Amon Carter Museum in Fort Worth, Texas, began selling a handful of Russell pieces, Petrie purchased the The Hold Up.”

The museum’s executive director, Tom Figarelle, says the iconic piece will be a huge addition to the museum and its patrons. “The Mint Collection has been the jewel of the Amon Carter Museum, but it was one of the biggest losses of Russell art for Montana,” Figarelle says. “Having the opportunity to bring back the prized piece of the collection to Great Falls and a significant piece of history back to the state is a dream come true in preserving Charlie Russell’s legacy.”

The museum has raised nearly $18 million of its $25 million goal, including a $2.5 million gift from Ian and Nancy Davidson of Montana, the largest cash gift in the museum’s history. Petrie has also promised the gift of Death of a Gambler, Russell’s 1904 shoot-out scene.

“Our committee has been quietly fundraising since late 2017, and we are inspired by the generosity of museum supporters from around Montana and the world, who are passionate about preserving the legacy of Charlie Russell and committed to growing this institution as one of the finest Western art museums in North America,” says Petrie.

Track the progress of the fundraising effort here.