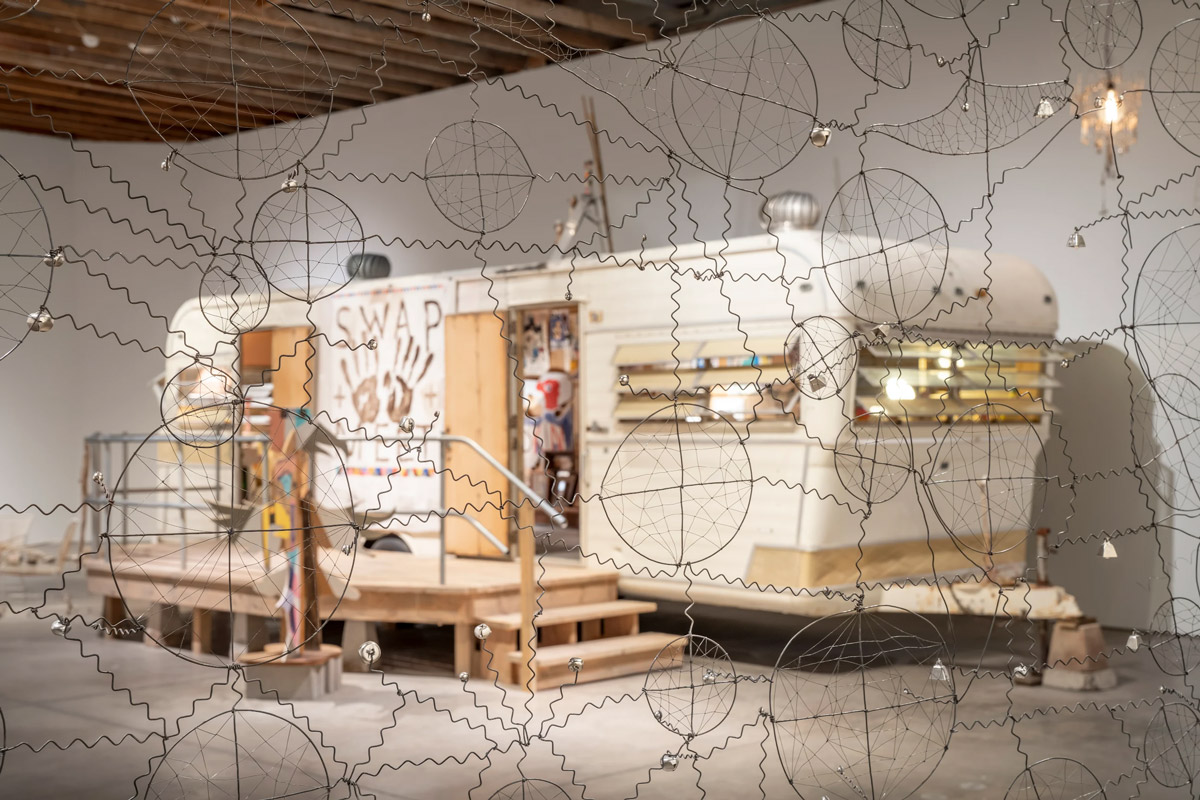 A hobby for some, a business for others, a lifestyle for few. Swap meets are simultaneously everything – everything being offered – and nothing – nothing anyone can’t part with. They are everywhere – found in every corner of the country – and nowhere – always portable, disposable, unfixed.

Their presence is unknown to most, essential to others.

Swap meets have always belonged to the “others.” The outsiders, the overlooked, the marginal. No political party or special interest group advocates on their behalf. No lobbyist on Capitol Hill.

People like Brad Kahlhamer who brings the swap meet to the art museum during the exhibition “Brad Kahlhamer: Swap Meet” at the Scottsdale Museum of Contemporary Art through October 9, 2022.

It’s a world Kahlhamer knows well. He began attending swap meets at 18-years-old. He routinely visits the Apache Trail Swap Meet on East Main Street in Mesa, AZ about a mile from his home there. He has another residence in New York.

He views swap meets as something akin to ethnographic field work. Research into the human condition. Places for like-minded strangers or friends to seek out meaning, belonging or surviving. Social networking in the flesh, conducted and connected via wood and plastic and rubber and steel and tin and paper instead of digitally. Individuals of different ages, residency status, cultures and races coming together actually, not virtually.

Kahlhamer finds inspiration in them.

The exhibition’s central installation was commissioned by the museum and features a mobile home trailer Kahlhamer purchased in cash at a Mesa swap meet in 2019 and subsequently converted into a studio. It is now filled with his artwork – drawings, paintings, sketches, sculptures. And a taxidermy javelina from his personal collection.

Talking to Kahlhamer, it’s apparent how particularly proud he is of the way this exhibition turned out, the aesthetic it captures. 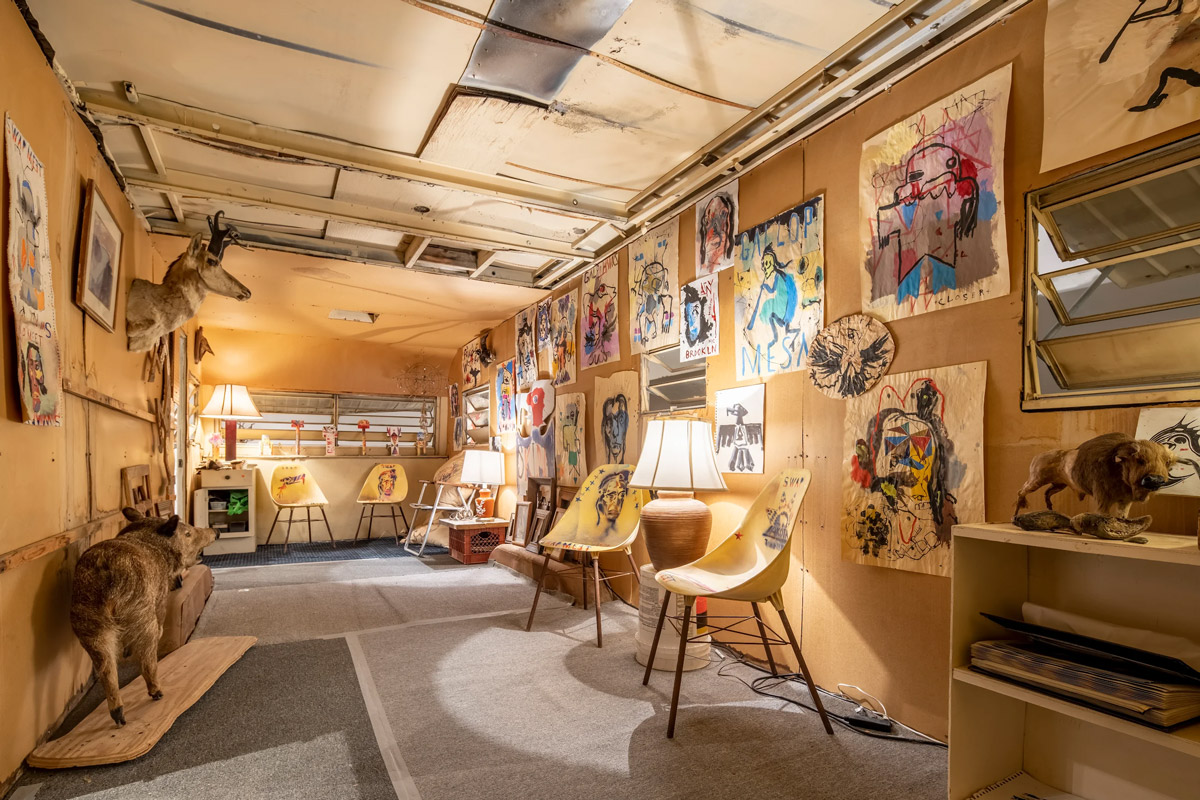 “It’s this idea of when you're driving up to Gallup, New Mexico, you see these house trailers way out on the on the plains – you know the high desert – the rooftops are covered with tires because the wind blows the metal off and you see all the cars and things and maybe a wisp of smoke, that's what I wanted to recreate,” Kahlhamer explains of the show. “This lone Native such as I am, out there in a trailer just fulfilling his or her life in the kind of way that an artist does. That's what ‘Swamp Meet’ is.”

A metaphor for what he considers to be his nomadic, itinerant contemporary art practice which has largely followed the meandering course of his life.

Kahlhamer is an Indigenous person adopted at three-days-old by a German American family in Tucson; his biological parents and his tribal affiliation remain unknown to him. That story is detailed here. His family moved to Wisconsin when the artist was 13. He made his way to Manhattan after college.

His artmaking and wanderlust have taken him around the globe. The need to get out and go, to look around, to experience new things, has always been inside him.

“I think my adoptive parents saw right away that I was a bit of a wanderer, I would hit the desert as a kid and they let me roam,” Kahlhamer remembers.

A favored childhood memory was his being given a bike with the additional territory it opened for his exploration.

“Swap Meet” features new work made in both his Brooklyn and Mesa studios. He presents a new series of “Zombie Botanicals” made from dried saguaro cactus parts. On view are his “Nomadic Studio Sketchbooks” full of drawings from his travels. Paintings, a large-scale dream catcher kinetic sculpture, a dream catcher American flag and new rock sculptures titled “Geologic studies / Mesa gardens.”

Odds and ends. This and that. One man’s trash, another man’s treasure. Their beauty in the eye of the beholder.

The swap meet come to life – both the stuff and the people. A kinship between what is being sold and who’s doing the buying and selling.

“It's a personification of all this used and discarded (material) which then of course circles back to the idea of adoption, that there's a previously owned personhood or object,” Kahlhamer said. 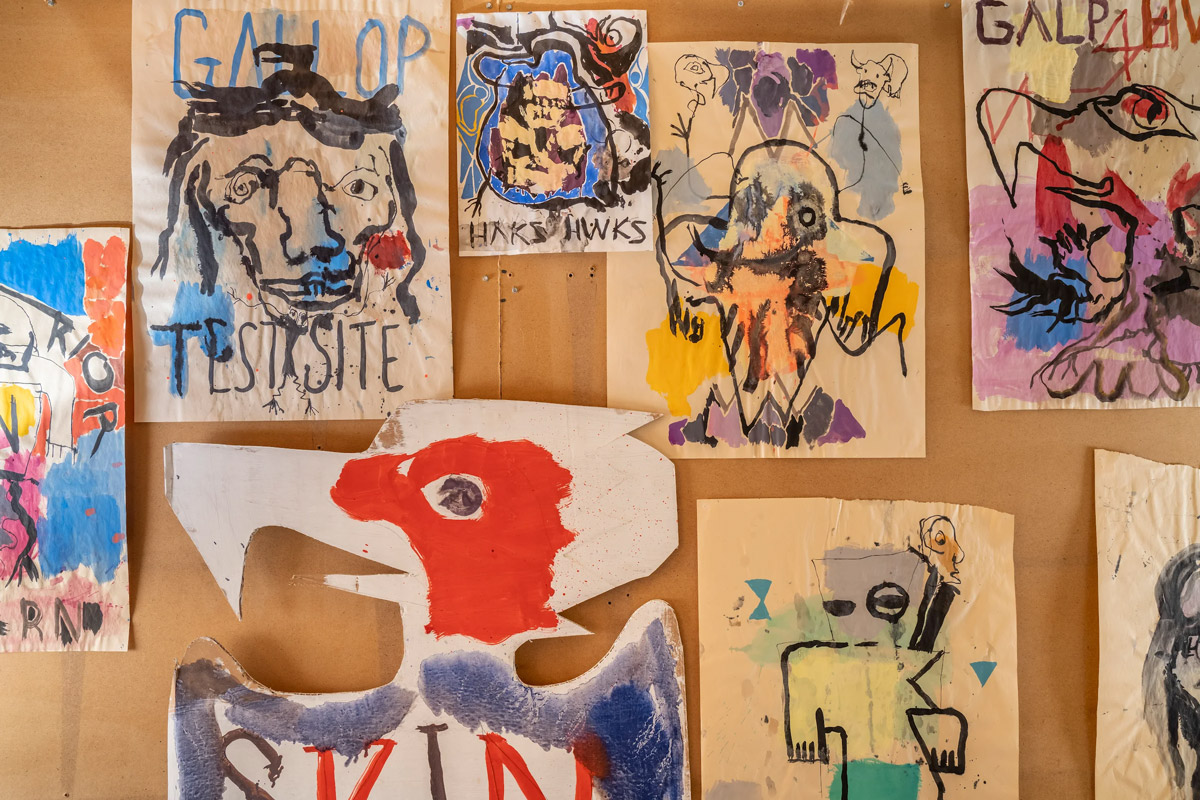