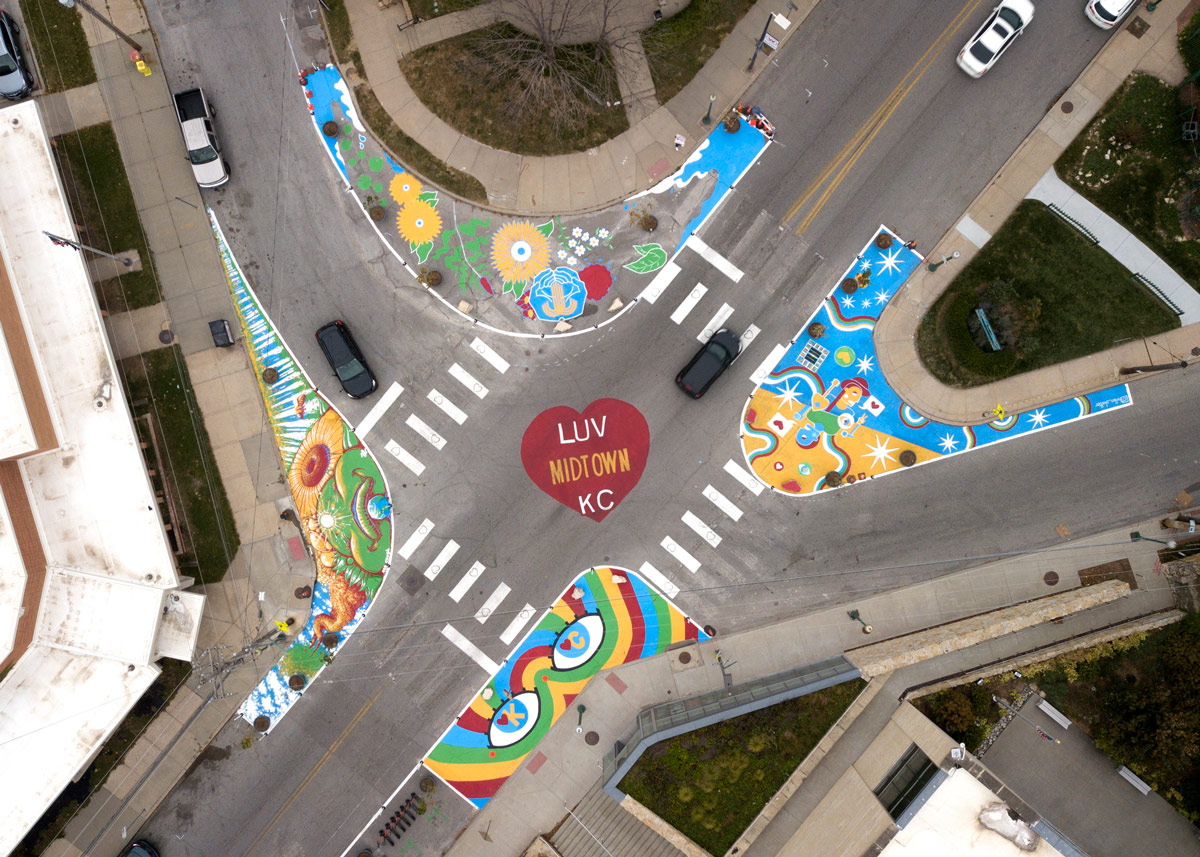 Street art’s ability to draw residents out of their homes to engage with neighbors, improve civic pride, bolster local businesses and enliven the places where it’s found are self-evident. From St. Petersburg, FL to Denver, public art has been used as a catalyst to revitalize urban areas. Outdoor art projects, installations, murals and the like are inexpensive and effective community energizing tools.

Counterintuitive, however, is a public safety benefit of street art: decreased traffic accidents.

That doesn’t make sense. Turning sidewalks into art galleries would seem to distract drivers and result in more crashes, but the opposite, in fact, is true.

The Asphalt Art Safety Study released by Bloomberg Philanthropies in spring of 2022 found traffic safety to be demonstrably improved across 22 locations in the U.S. where Bloomberg Philanthropies supported Asphalt Art Initiative projects were undertaken. The study results included a dramatic reduction in motor vehicle crash rates after the projects were installed, including a 50% drop in crashes involving pedestrians or cyclists and a 37% drop in crashes with injuries. The study also found a 25% drop in the rate of conflicts between drivers and pedestrians, as well as a 27% increase in drivers yielding to pedestrians with the right-of-way.

The Asphalt Art Initiative couldn’t come at a better time.

Over the past 10 years, in contrast to global trends, American roads have become more dangerous. That fact, surprisingly, was exacerbated during the COVID-19 pandemic. Road fatalities in 2020 saw a roughly 7% increase from the year before, this, despite fewer people driving and fewer miles traveled as a result of lockdown.

Analysis from Axios.com theorizes that, “As the roads emptied out during the pandemic, it opened up room for Americans to indulge their worst road habits: driving too fast, too distracted and, often, too impaired. And those habits have continued into 2021.”

Roughly 40,000 Americans died as a result of motor vehicle crashes in 2021 and pedestrian fatalities increased in the U.S. by an unprecedented 21% during the pandemic.

The Asphalt Art Initiative program is inspired by work done to improve pedestrian safety and revitalize New York City streets during Michael R. Bloomberg’s tenure as Mayor from 2002-2013. Since launching in 2019, more than 40 U.S. cities have completed or are undertaking street art projects as part of the program which is also expanding to Europe.

The focus of the initiative is “asphalt art:” visual interventions on roadways (intersections and crosswalks), pedestrian spaces (plazas and sidewalks), and vertical infrastructure (utility boxes, traffic barriers and underpasses).

Artworks placed here tend to cause drivers to slow down, be more cautious and pay more attention to pedestrians, resulting in increased safety.

Across the West, three projects are planned for completion this summer. 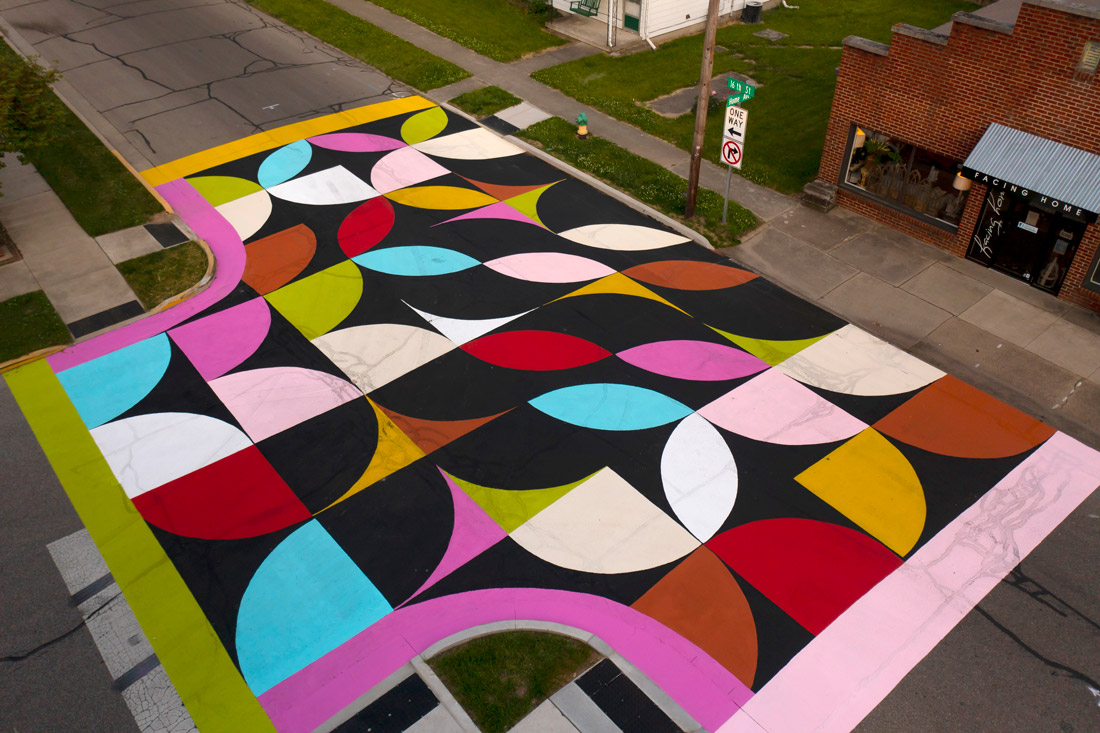 Overview: A series of crosswalks and a large street mural will connect the North Park neighborhood with a commercial district in the city’s core.

“The site we chose near North Park had a variety of assets. First, it is in a historic neighborhood that has always had a great level of socioeconomic diversity and North Park is a common amenity to all people living in that neighborhood,” Zack Terakedis, Director, Billings Industrial Revitalization District, said. “Second, Billings has a unique topographic structure we call the Rims. It is literally a sandstone rock formation that runs the length of the city from East to West. It was a feature that has been important to people of this region going back centuries. The Crow tribes of this area gathered here in the summers and fall for hunting and many sites of celebration that were important in their culture.”

From the Rims, people can see the North Park neighborhood.

“With the art projects being in North Park, residents and users of the park will interact with it directly, but other citizens using the popular trail system on the Rims will be able to look down into the neighborhood and interact with the artwork from a totally different and unique perspective,” Terakedis added.

Beyond pedestrian safety, project planners hope to bring events back to North Park which served as the original fairgrounds location for Billings when it was a young, developing, Western railroad town.

Community members are already looking forward to the project’s completion with a celebration event planned on August 6. The BIRD (Billings Industrial Revitalization District) Art Market will feature an arts and crafts market with over 50 local vendors; nothing of the kind currently exists in the area.

Overview: Transformation of a triangular intersection into a community plaza in the Westwood neighborhood.

Utilizing a $25,000 grant from Bloomberg, Denver’s Department of Transportation and Infrastructure is partnering with the Art Students League of Denver and a local community organization called BuCu West on a street beautification project that will visually transform an intersection in a local business and arts district, pairing safety improvements with asphalt art. Improvements installed to date at the three-pronged intersection include new crosswalks and paint and posts that create bulb-outs to shorten pedestrian crossing distances and slow vehicle speeds.

This project will help inform future work that is planned along Morrison Road to improve pedestrian safety and the economic vitality of the corridor, with Denver voters approving $12M for permanent safety improvements through the Elevate Denver Bond program.

Overview: “The Heart of Kodiak” intersection mural will welcome workers and visitors to the heart of the city’s historical center and tourist district.

As with the other locations, Kodiak’s project has a three-pronged goal of improving safety, community revitalization and economic improvement. It is targeting tourists in particular.

“Kodiak relies on our tourism industry, but we have had challenges attracting and retaining organized tourism such as cruise ships. Some cruise lines have even removed Kodiak as a destination due to the lack of pedestrian-friendly activities and interests as well as aesthetics downtown,” Lynn Walker, Curator, Kodiak Historical Society & Kodiak History Museum, said. “We sought out this funding opportunity to see how asphalt art, as a relatively low-cost, high impact form of art, can revitalize our downtown center and address some of our tourism needs. Additionally, it is an opportunity for our Island community to showcase the work of local artists and provide a unique space to welcome visitors with a touch of the unique cultural heritage of our Island.”

The chosen site is where Kodiak’s ferry and cruise ship loading terminal is and across from the city’s cultural and educational district. 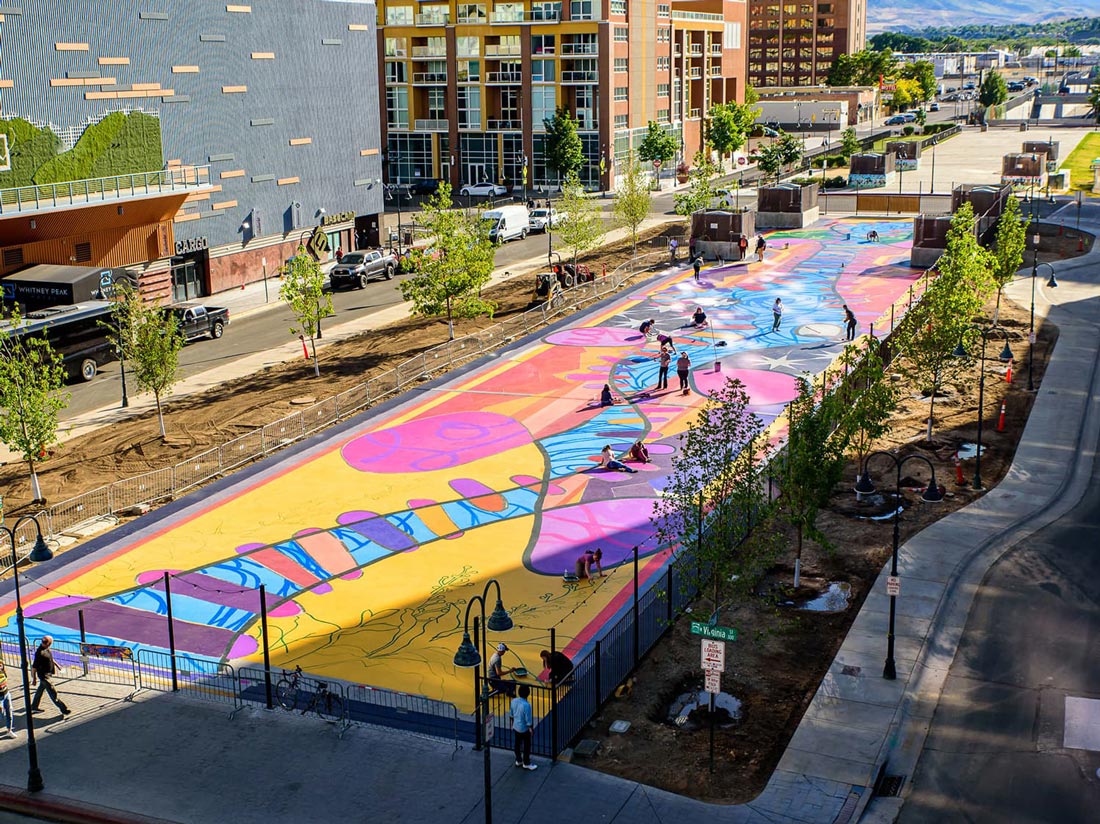