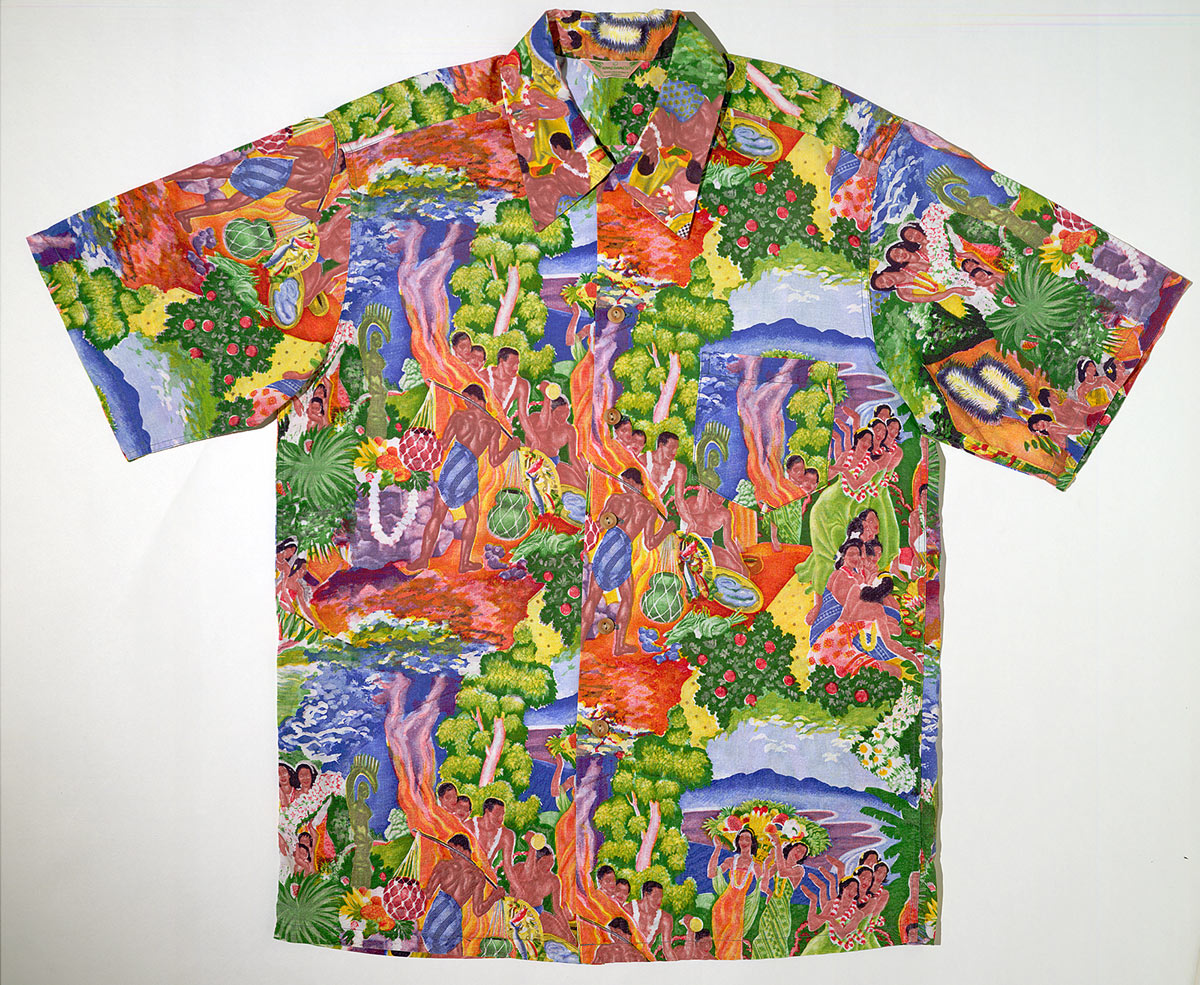 In our disposable society, fast and easy has replaced quality and craftsmanship. Cheap labor and mass production eliminated skilled hands from the production of goods. Throw it away and buy another one.

This modern American phenomenon defines electronics, furniture, textiles. Take as an example the Aloha shirt – the vibrantly colored button-down t-shirts inspired by the people, culture and flora of Hawaii. What passes for an Aloha shirt on the rack of a department store in Anytown, U.S.A. today bears virtually no resemblance to the artful masterpieces which popularized the garment 80-plus years ago.

Their splendor can be appreciated during a refreshingly clever exhibition at the Washington State Historical Society in Tacoma, “Art of the Aloha Shirt: Keoni of Hawaii, 1938–1951.” The presentation explores the history, artistry and production of Hawaii’s enduring fashion statement. The exhibition of original textile artwork, production sketches and swatches, advertisements, and vintage shirts, tells the story of an early innovator, John “Keoni” Meigs, and an industry that has left an indelible mark on fashion in the United States and the world. 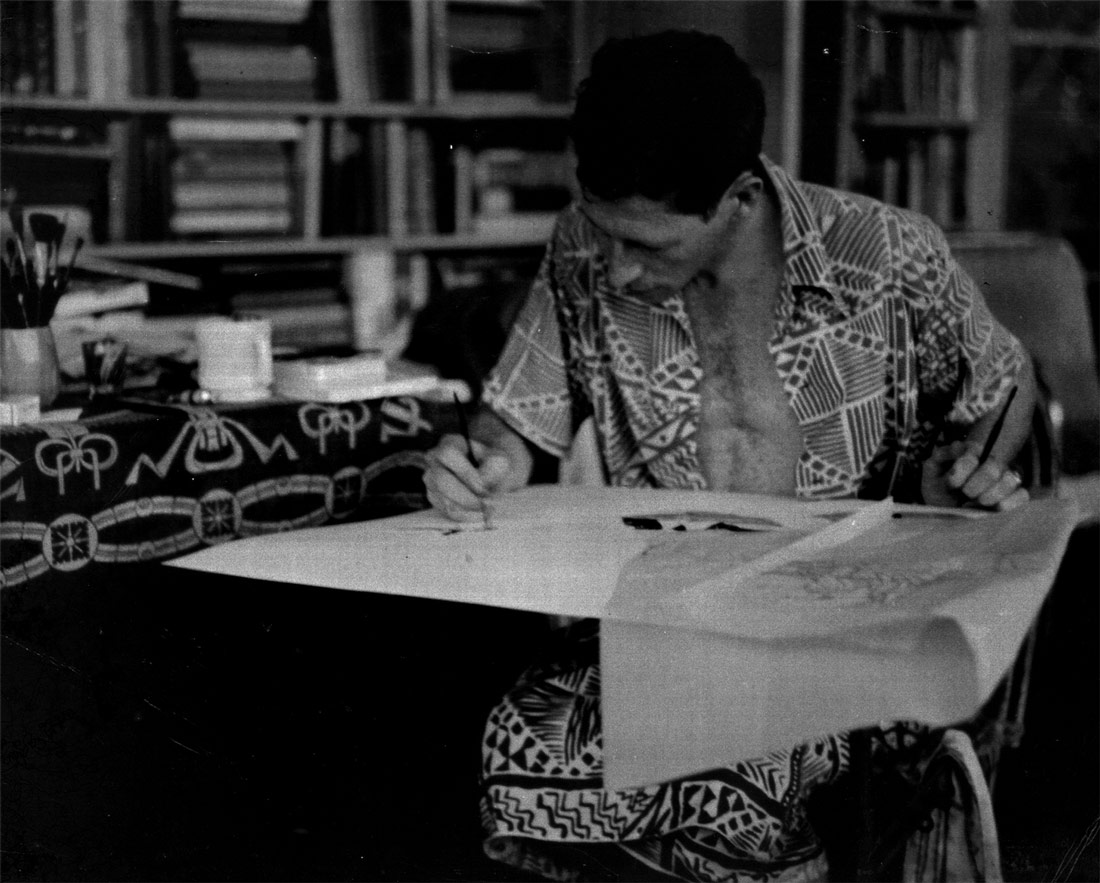 The exact origin of the Aloha shirt remains uncertain. The patterns of Polynesian tapa cloth, the colorful and bold floral designs of Tahitian pareau (wraparound skirts) and the sheer Japanese fabric used for making kimonos are often cited as some of the early stylistic influences.

For most Americans, however, these multicultural origins are reduced to describing any shirt with a flower pattern, pineapple or surfer on it is a “Hawaiian shirt.”

“That's how I had always heard them referred to before we started researching this exhibition, and then I was like, ‘Oh, this story is much more interesting than I thought it was,’” Gwen Whiting, Lead Exhibitions Curator at Washington State Historical Society, said. “Some of the early Aloha shirts are made from kimono material so there was this really interesting cross-cultural collaboration happening as these early shirts are being designed.”

“Art of the Aloha Shirt” corrects the “Hawaiian” generalization by highlighting the varied backgrounds of the early innovators and influences of the shirts.

“There's a lot of different cultures in Hawaii at the time and so you see these motifs come from various cultures, even the design of the shirts themselves can really reflect that multicultural collaboration that was happening in the in the garment industry in Hawaii which is one of the reasons, at least for this exhibition for this particular era of shirts, we shied away from calling them ‘Hawaiian’ shirts,” Whiting added. “They have the influence of Asian designers and Indigenous artists and John Meigs himself (was not from Hawaii).”

All of the shirts on view in the show are vintage, produced during these artisanal years when even one-off, custom made to order shirts were available for purchase direct from the designers. Over the years, as manufacture become more and more mass produced, the designs were simplified, losing their elaborate detail, the artistry disappearing.

Sometime in the late 1920s to the early 1930s, when Hawaii’s economy began shifting from an agricultural to a service-oriented economy and tourists started flying to Hawaii in ever-increasing numbers, the emphasis of the island clothing industry shifted from the production of work clothes to sports and casualwear.

The popularity of Aloha shirts grew slowly until after WWII when it surged as servicemen returned to the mainland sporting the vibrant designs evocative of the island paradise. An expanding American middle class with disposable income for travel, booming Western population and advent of commercial jet airplanes in the late 1950s and 1960s combined to bring hundreds of thousands of tourists to Hawaii – admitted as the 50th state in 1959 – most of them desiring a souvenir shirt.

Despite a massive reduction in artistry, the Aloha shirt became and remains ubiquitous across American culture. Millions of people who’ve never been to Hawaii purchase them from every department store in the country.

“People like color and vibrancy and joyful motifs and you kind of feel like you're on vacation when you're wearing one,” Whiting surmises of Americans’ ongoing attraction to the garment.

The lure of the idea of Hawaii, the islands, “it’s five o’clock somewhere,” flip flops, a casual life of waves, sun and rum drinks. The consumer sentiments which have made Jimmy Buffett a billionaire and “saltwater rock” and Kenny Chesney dominant in the music industry keep Aloha shirts fully stocked in the men’s department.

They represent a lifestyle – often never attained – a mindset. 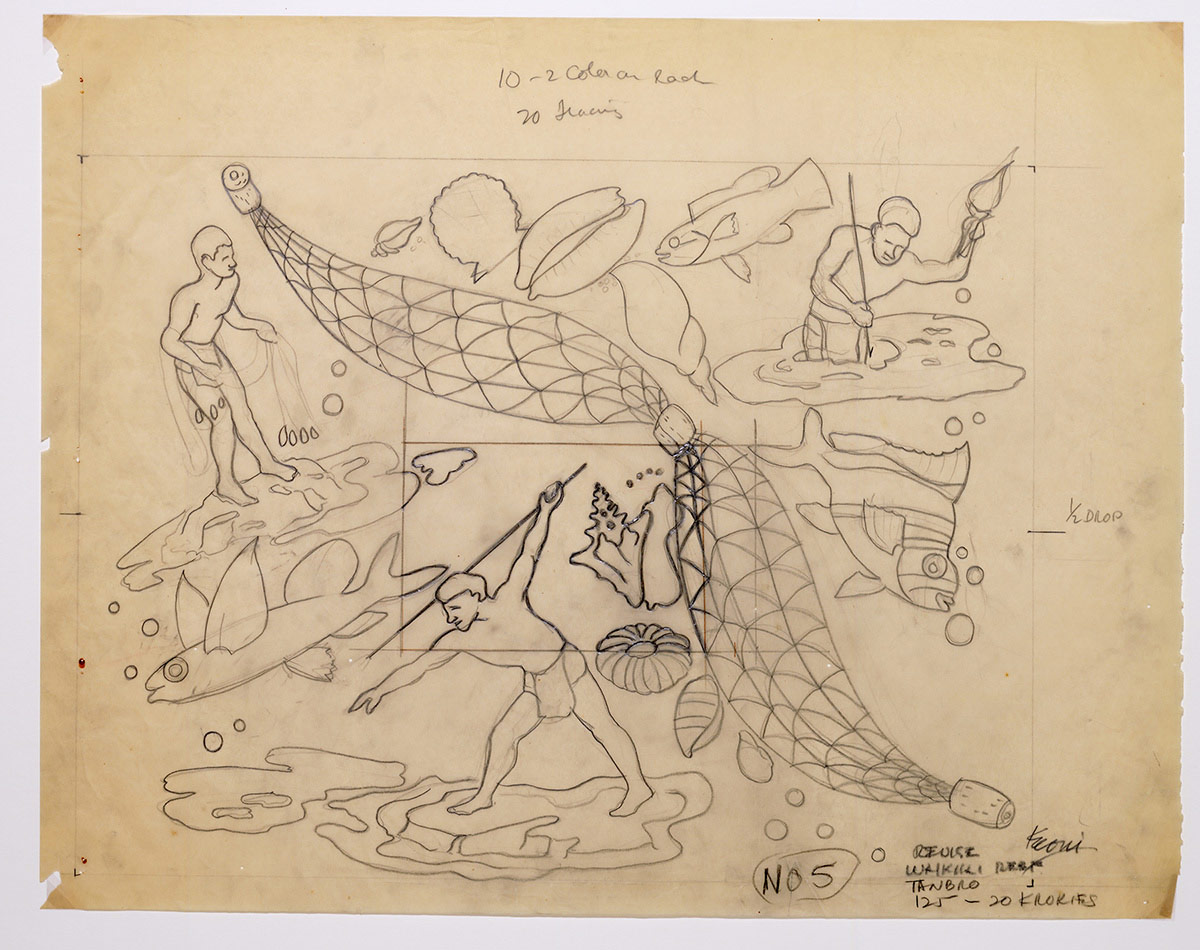 In the history of the Aloha Shirt, there has been no more innovative merchandiser nor better self- promoter than “Keoni of Hawaii.” John “Keoni” Meigs (1916-2003) (“Keoni” is Hawaiian for John) was a self-taught painter whose talent became known to the early shirt manufacturers in Honolulu.

His astonishing life could serve as a compelling museum exhibition all its own.

Kidnapped as an infant by his father and his father’s mistress, Meigs would never again see his mother. It was only after his father’s death when he circuitously landed on Hawaii via Texas, Southern California and San Francisco and attempted to volunteer for service in the armed forces following the attack on Pearl Harbor that he learned he’d been living under an alias and that his “foster” mother was actually his abductor.

In Texas, one of his neighbors was Sam Houston’s last living daughter. He worked for NASA creating sketches for the Apollo program. He wound up in New Mexico, becoming a prominent landscape painter in the orbit of Peter Hurd.

A biography of Meigs, “Never a Dull Moment,” was published in 2015.

In 1938, he created his first shirt designs, concentrating on Polynesian tapa patterns inspired by the originals he had studied at the local Bishop Museum of natural and cultural history in Honolulu.

Keoni is credited with creating as many as 300 Aloha shirt designs.

“In a sense, Aloha shirts put Hawaii on the map,” Meigs is quoted as having said. “The first thing people did when they arrived was make a beeline for a department store to buy one. A lot of kooky things were designed, but I always tried to be a purist when it came to using motifs from Hawaiian sources.”

“Art of the Aloha Shirt” is curated by Dale Hope, who grew up in Hawaii, is a second-generation veteran of the garment industry, and authored the definitive book on the subject, “The Aloha Shirt: Spirit of the Islands,” in 2000. Many of the shirts on display belong to Dan Eskenazi, a Seattle collector.

The exhibition opened July 1 and can be seen through September 11, 2022. 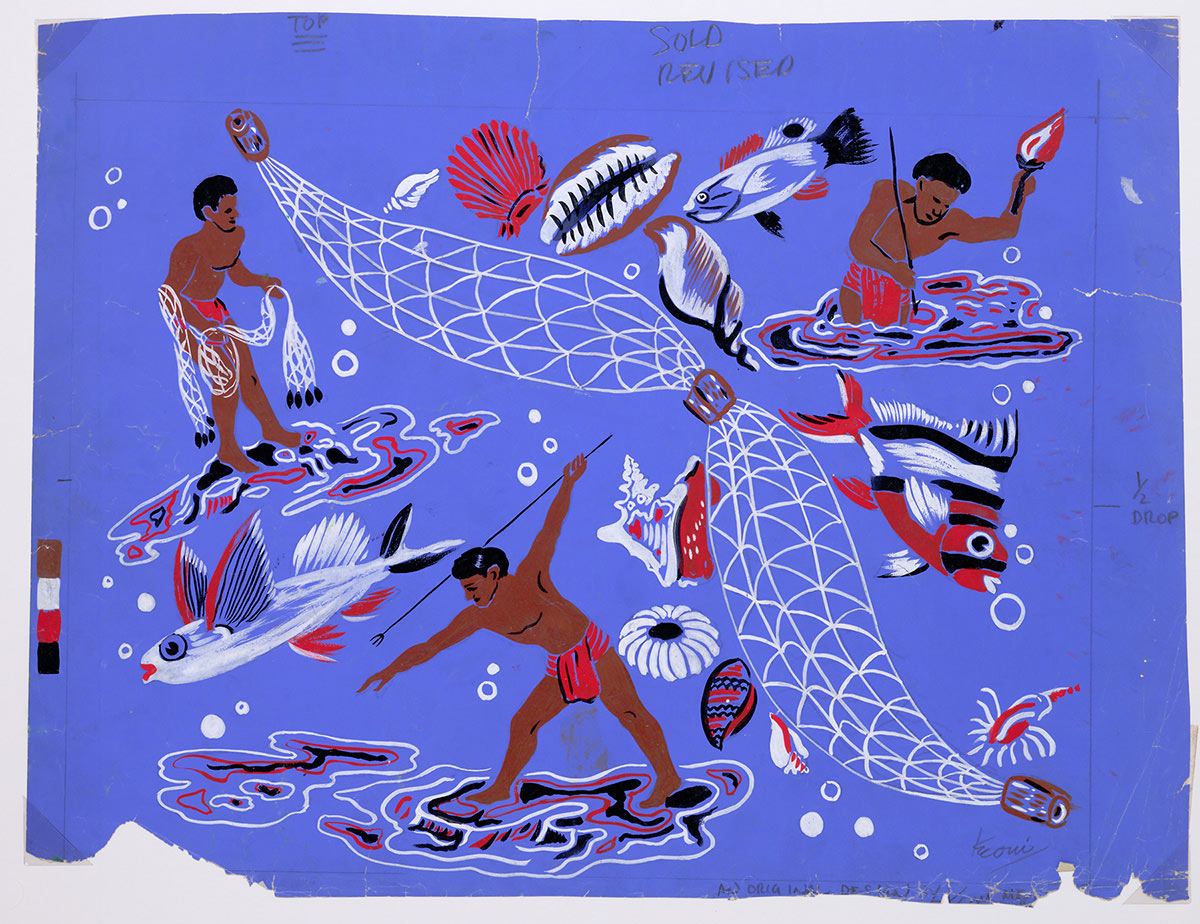