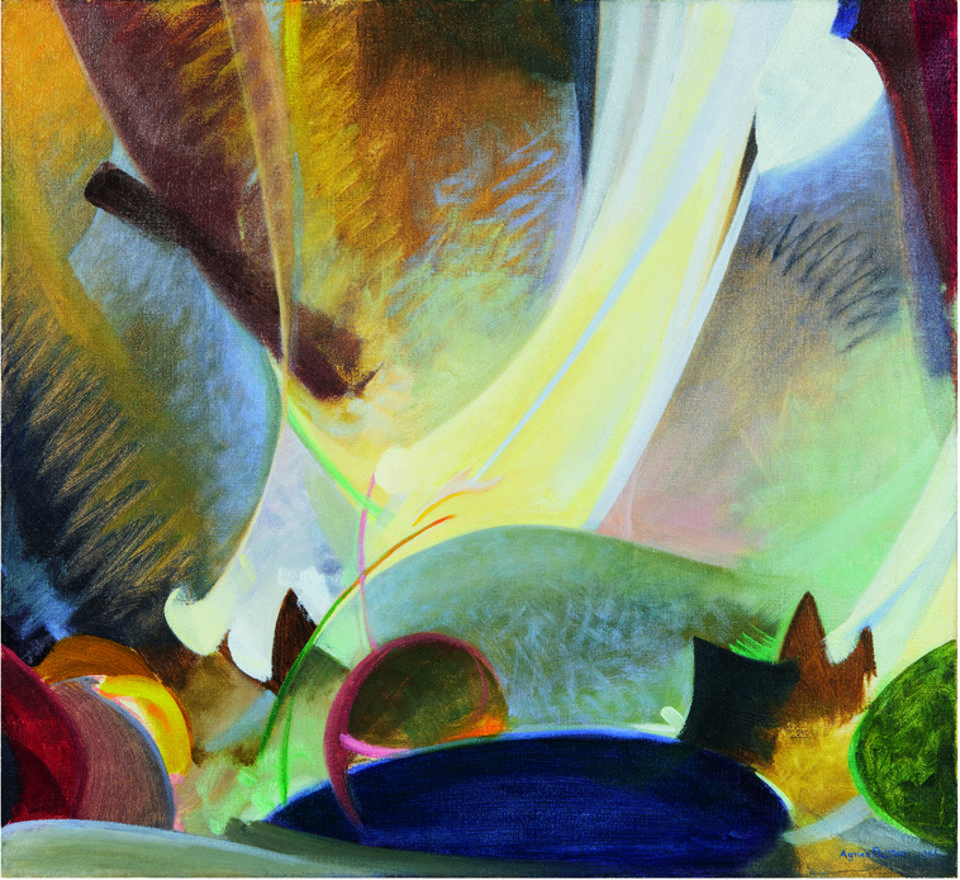 Fitting, then, that a widely-lauded, cross-country tour which has now recast early abstract painting with her as a central–not forgotten–figure, “Agnes Pelton: Desert Transcendentalist,” should culminate at the Palm Springs Art Museum through September 6th.

Pelton (1881-1961) sought the isolation of the desert after leaving the isolation of Water Mill, Long Island where she lived in an abandoned windmill. Cathedral City, California, on the outskirts of Palm Springs, would be her home starting in 1932.

Her entire life, even before she was born, seemed to center upon getting away.

Pelton’s maternal grandfather, Theodore Tilton, was a newspaper editor, abolitionist and protégé of Henry Ward Beecher, the superstar minister of the mid-1800s. After learning of an affair between his wife and Beecher–who vigorously preached fidelity–Tilton sued his mentor for alienation of affection. The scandalous trial became THE tabloid fixation of the day. Elizabeth Tilton refused to testify against Beecher. The trial ended in a hung jury. Theodore Tilton was humiliated.

To evade the harsh glare of the media spotlight, the Tilton’s sent their daughter, Agnes’ future mother, to Europe. There, she met a wealthy ex-pat whom she would marry and start a family. They all returned to the States in 1881, but Agnes Pelton would see her father only infrequently prior to his death of a morphine overdose when she was just 10.

Pelton and her mother became reclusive, Agnes Pelton saying long after that her grandparent’s infidelity scandal had forever “cramped” her and her mother’s life.

Perhaps it’s no surprise then that much of Pelton’s life was spent in search for a spiritual meaning to life outside of mainstream religion. She delved deeply into mysticism and the occult. Agni Yoga, theosophy and the teachings of Helena Blavatsky among others. She was not a cultist, nor member of any religion, she was a spiritual seeker.

This forms the remarkable stew of influences which shaped her visionary creative output. 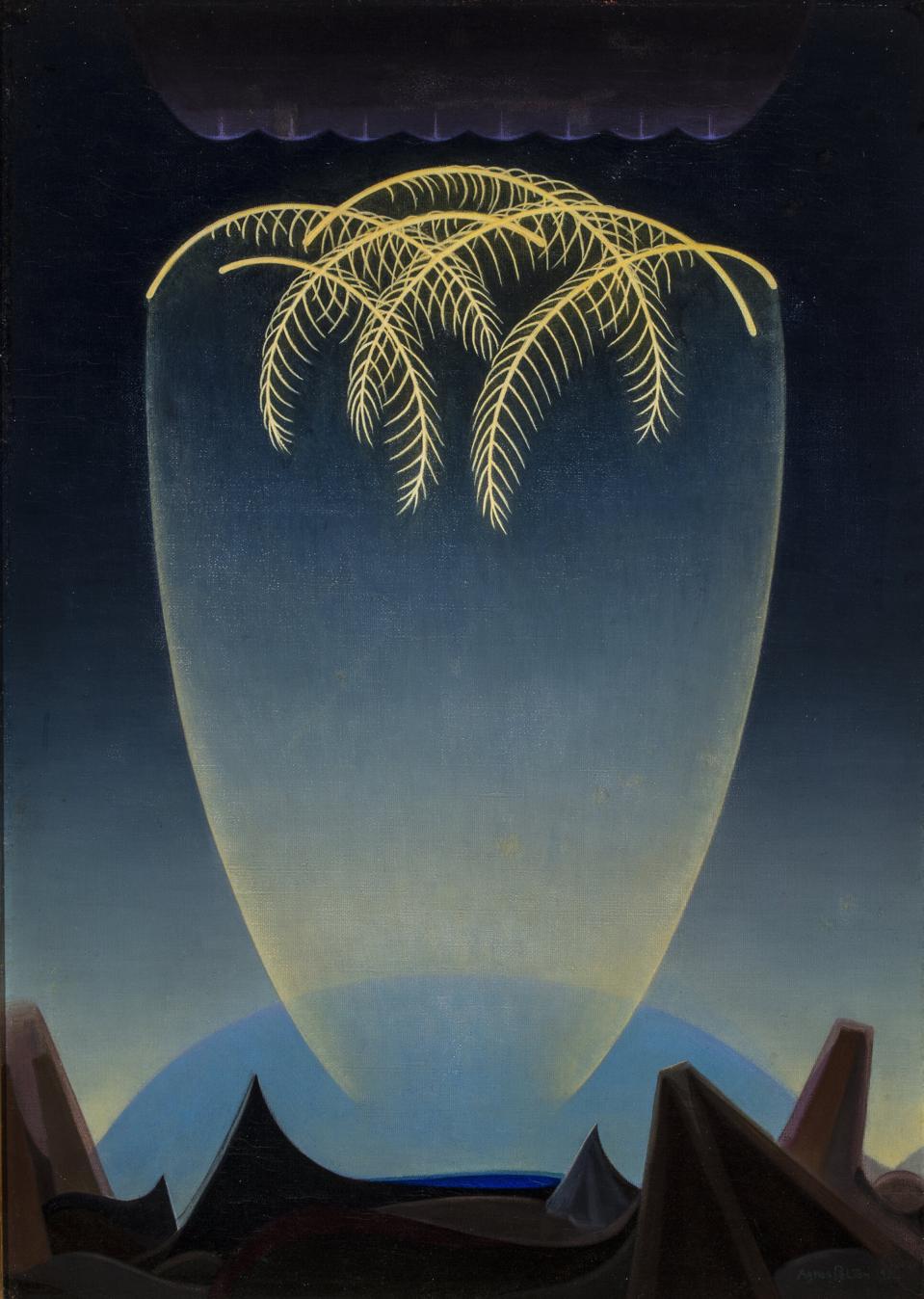 All of these adjectives and more could be used to describe Pelton’s “abstractions,” the term she used for her abstract paintings. The pictures have an uncanny quality of invitation. These are scenes which beg to be visited. To bathe in the soft, soothing, restorative light of the places depicted.

Impossible, of course. These worlds are solely the creation of Pelton’s expansive mind.

“They are the stuff of dreams, visions and mirages; they often came to the artist while she slept or meditated and they arrived remarkably whole,” New York Times art critic Roberta Smith wrote in her glowing review of the exhibition when it appeared at the Whitney Museum of American Art in New York.

The Palm Springs presentation of “Desert Transcendentalist” adds another exhibition focused on Pelton’s landscape paintings. It was through the sale of these landscapes to tourists, and earlier in her career portraits, which provided Pelton’s living.

“The result is the ability to see some of the simultaneous considerations within her practice from the 1920s, even before arriving in the desert, to the 50s, which include particularly her use of vivid colors that were inspired in part by her natural surroundings,” Rochelle Steiner, Chief Curator & Director of Public Programs and Education at the Palm Springs Art Museum, told Forbes.com. “We can also see the typical organization of her abstract works through the utilization of the horizon line, which would have been seen and observed in nature.”

The Palm Springs Art Museum was able to create the exhibitions of landscapes thanks to the quantity of such works in its collection as well as those owned by local private collectors. The two halves of her creative output on display simultaneously in adjoining galleries–her private, personal, visionary “abstractions” along with the market-driven landscapes upon which she relied to support herself–offer rare insight into an artist’s divergent creative motives. 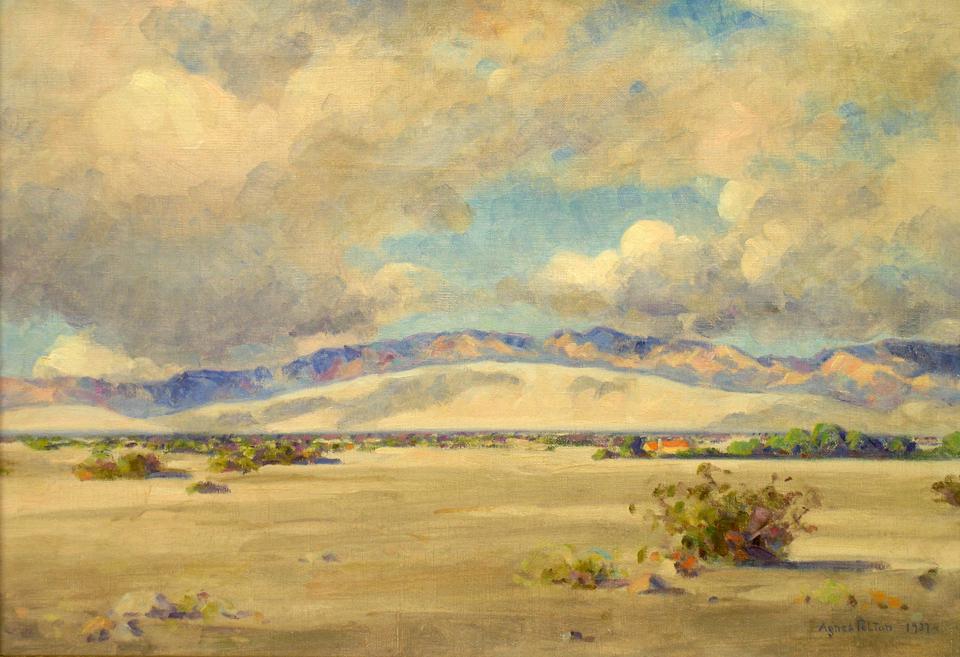 From Cathedral City to the World

The Palm Springs Art Museum presented one of the first comprehensive exhibitions of Pelton’s work back in 1995. That show traveled widely, but hit the art world in a different era. An era long obsessed by a narrowly constructed narrative of creativity strictly centered on white, male artists working out of the European tradition.

“At that point, her work was already in major public and private collections, but the art historical consideration of women painters, and particularly abstract painters of this era, was relatively limited,” Steiner said. “Since then, there has been increasing attention to under-recognized artists, including women such as Pelton.”

Whitney Museum curator Barbara Haskell, who oversaw her institution’s installation of the show, shares an anecdote about how she had to lobby the museum’s acquisition committee for three successive years in the 1990s to acquire its first work by Pelton before receiving approval. The paintings now rarely come off public display there.

Sadly, COVID-19 precautions from both the museum and museum-goers gutted the New York presentation of “Desert Transcendentalist.”

After traveling from museums in Phoenix to Santa Fe, then New York and now Palm Springs, “Desert Transcendentalist” assures Pelton’s work no longer risks the obscurity it faced in the later half of the 20th century. Pelton, who always sought isolation, now stands shoulder-to-shoulder in company with the icons of abstract painting.