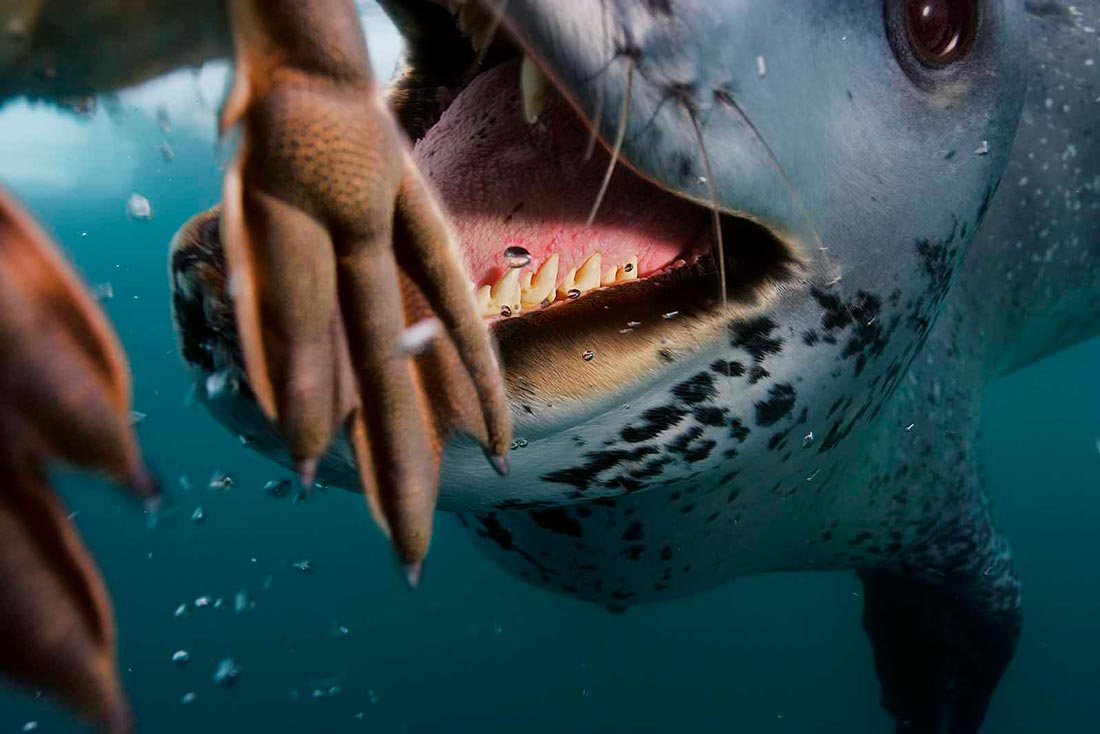 Millions of tourists visit Yellowstone National Park each year hoping for a glimpse of a grizzly bear, a wolf, a moose. Capturing a photograph of these charismatic animals makes for the ultimate souvenir.

Some visitors pull it off, many others don’t, all, however, can eat their hearts out at an exhibition of the world’s greatest wildlife photography in the shadow of Yellowstone at the National Museum of Wildlife Art in Jackson, WY which exhibits “National Geographic: 50 Greatest Wildlife Photographs” through April 24, 2022.

“National Geographic” has become synonymous with wildlife photography over its 133-year publication history. That wasn’t always the case. In its early days, the magazine did not include photography because it was thought to diminish the seriousness of its content.

This exhibition begins by sharing the story of George Shiras, an amateur photographer who would change that perspective. In 1905, he brought a box of photographs to National Geographic. In 1906, the magazine published 74 of Shiras’ photographs in an article titled “Photographing Wild Game with Flight and Camera.”

Positive reader response encouraged the publication to modernize its view toward publishing photographs.

Beyond simply striking images of magnificent animals, the exhibition examines the progression of wildlife photography as well as how perspectives of the wildlife being pictured has changed. Beyond color film and telephoto lenses, today’s image makers employ camera traps, remote imaging and underwater technology to capture wildlife in its natural habitat. Shiras obviously never had access to such innovations.

His images – more specifically the title of his article – also demonstrate changing attitudes toward animals; terming them “game” has become increasingly obsolete.

Wild animals today are primarily valued for their intrinsic beauty, not as a food source or trophy. Their scarcity and precarity take prominence. Articles featuring wildlife photography now are often accompanied by titles including the words “endangered,” “threatened,” “vanishing.”

It is impossible to admire wildlife photography in 2021 and not consider the dual catastrophes facing the natural world: climate change and biodiversity collapse.

“Looking at Paul Nicklen’s Polar Bear (2004), in which the artist depicts a polar bear swimming underwater and its ghostly reflection above, might prompt you to consider that the polar bear population is diminishing largely due to the changes in their environment,” Tammi Hanawalt, Curator of Art at the National Museum of Wildlife Art, said of one image from the exhibition. “This directly relates to Jim Brandenburg’s Wolf taken prior in 1986 at Ellesmere Island, Canada, where a lone arctic wolf is jumping from one floating ice patch to another. There is something really poignant about the statement that Brandenburg is making in this photograph – a single wolf amidst a stark background.” 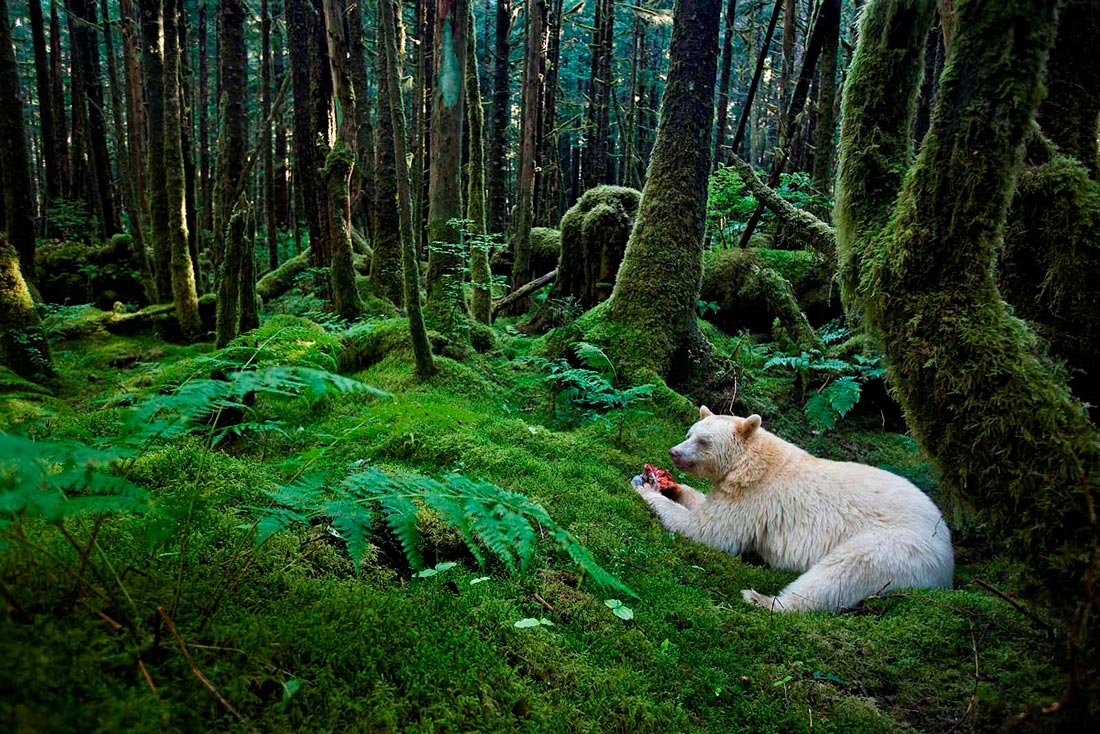 Photo by PAUL NICKLE, A Kermode bear eats a fish in a moss-draped rain forest. From the exhibition "National Geographic: 50 Greatest Wildlife Photographs."

A distinctive element of the exhibition is that each photograph on display was taken in a natural environment. None of the images were taken in permanent captivity or through baiting techniques.

“National Geographic requires that their photographers capture images that are in real time. They are not manipulated photographs,” Hanawalt explains. “Patience is definitely involved along with the artistic ability to recognize a great composition – sometimes within thousands of shots

“One of my personal favorites is Lions (2007), by Beverly Joubert, where she has captured several female lions in a river. In the photo the lions are central to the story she is telling, and we know this because the animals are in detail and the background is out of focus,” Hanawalt said. “Paul Nicklen’s Spirit Bear (2010) of a white variant of a black bear is also really special. The white fur of the bear stands out against the lush green of the forest, where it lounges with what looks to be its lunch, a large salmon.”

Winter represents an especially good time to view this exhibition, and visit the museum, for its close connection to the abundant wildlife surrounding it.

“Right now, you can look outside the window of the Museum across the National Elk Refuge and see the elk that have migrated back to the area that they come to every year. Seeing the elk against the snow dusted mountain backdrop is enchanting,” Hanawalt said. “With the artwork inside you get to see some of those same animals up close and personal, whether in paintings, sculpture or photography. You cannot help, but be inspired by the setting.”

Should that inspiration encourage anyone to pick up a camera and photograph nature, there are lessons to be learned from the professionals at National Geographic. One would be commitment. Amy Vitale donned a panda costume soaked in panda urine to take her close-up photo of a giant panda in its natural habitat. Thomas Peschak set up a stepladder in the ocean, wading through a nursery of blacktop reef sharks to capture his unique image of the animals.

Short of those measures, “What other nature photographers will learn is that there is much more involved with getting a great photograph than meets the eye,” Hanawalt advises, “you have to have a great amount of patience. Wild animals don’t perform on command and sometimes it just comes down to luck.” 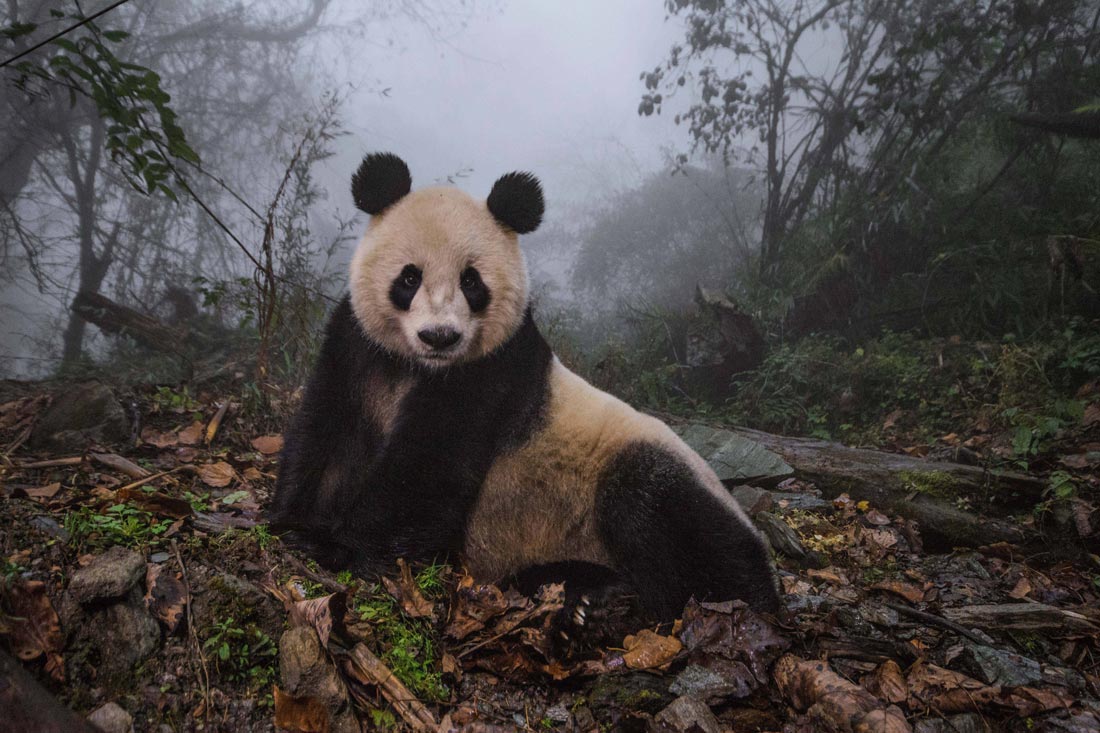 Photo by AMI VITALE, A sixteen-year-old giant panda inside her enclosure at the Wolong Nature Reserve. From the exhibition "National Geographic: 50 Greatest Wildlife Photographs."