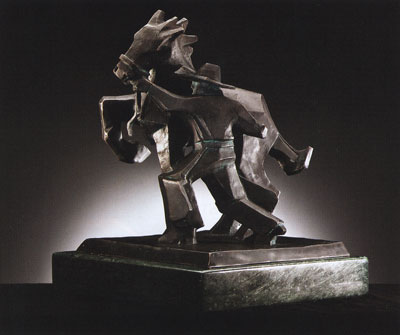 Arizona’s desert son, Ed Mell, recently finished about 18 new works. Over the years, Mell has cemented his reputation as a master of the Southwestern landscape. The drama dripping from each painting testifies to this fact. Mell’s new work includes both realistic and abstracted landscapes, figurative and florals, as well as a new bronze titled Sidestepper. In this edition of 30, Mell captures the energy of a horse with a cowhand at its side. In the painting Running Horses, he plays with the movement of equine in an abstract manner. In Vertical Buck, Mell depicts a previously drawn iconic rodeo image, but, he says, he wanted to revisit it and “play with that energy again.”

Some of Mell’s new pieces are based on an eight-day photo-sketching trip he took in May to the Grand Canyon. One particular image, Desert Palisades/Grand Canyon, encapsulates his experience. 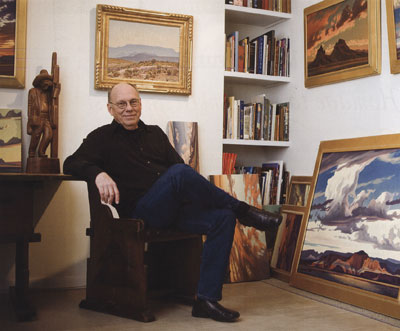 Another piece, Grand Canyon Palisades, is based on a sketch he did on the canyon’s rim last summer. Both paintings depict the same subject but reflect different times of day with different perspectives. Mell also presents two different approaches to paintings of a cactus flower; Sonoran Night Veils is done abstractly while Inner Light is more contemporary. In these florals, Mell focuses on the luminescence of the subject.

“I enjoy the subtlety of color in working in that palette, and I love pushing the abstraction of different pieces,” says Mell.

The artist revisits another familiar subject in the piece title Ganado Horses. “I enjoy doing it because, to me, there’s a real calm that comes with grazing horses in the evening,” he explains.

Whether painting or sculpting, Mell’s work is constantly evolving. He began developing ideas for this annual show early last summer. He says he doesn’t paint for a show but rather for each piece. “I approach each painting as an individual piece and not part of a show,” says Mell, “And I’m always surprised what the show looks like when it’s done.”