Desert Son: Arizona powerhouse of creative talent, Ed Mell, invites us into his studio for a preview of his new work. 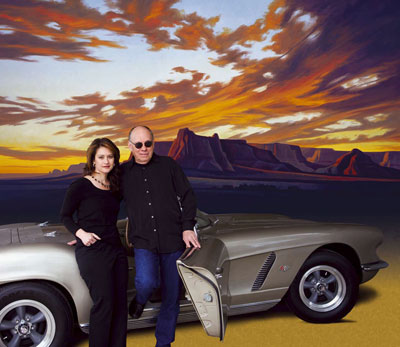 "I was born two miles to the south and went to high school two miles that way,” says Ed Mell, pointing past the cactus-lined wall of his downtown Phoenix studio and towards a quickly descending sky of dark clouds, bringing with it a threat of rain.

Ed Mell’s studio, set in a turn of the century mission-style converted grocery store, is both literally and figuratively located directly in the heart of his art. Surrounded by the things he loves – and collects rigorously – paintings and drawings by Maynard Dixon, Mexican prints, vintage cars and streamlined vintage toy cars, art books, photographs, 1950s dioramas, sculptures by Emery Kopta, a drawing by Thomas Hart Benton, Mells’s studio presents a look inside the mind of Arizona’s favorite son and most famous painters of mesas, canyons and desert skies.

“My influences are probably from the past, but I’m putting my own spin on it towards the future,” says Mell. “I’m influenced by a huge, broad gamut of painters, from European Modernists to American Modernists, to the Taos Founders and then Maynard Dixon. And, even different people who have painted the West and are unknown but I’ve found some work by them and become inspired by it.” 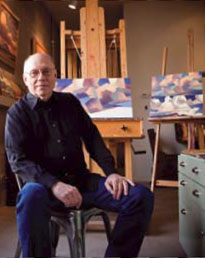 Dixon’s name is mentioned like that of an old friend. Mell and Dixon are mentioned in the same breath commonly in the art world and, in 1985, the then named Dewey Gallery in Santa Fe hosted an exhibition titled Past and Present: Images of the Southwest by Maynard Dixon and Ed Mell. Several years ago, Mell purchased Dixon’s painting, Smoky Morning, Virgin Valley, NV, 1927, which is now displayed in the living room of the home he shares with his wife Rose Marie. But the Dixon influence extends much further than just an appreciation of his painting style. 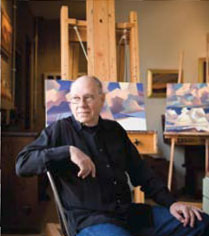 On the easel are examples of Mell's more abstract paintings.

“I became aware of Maynard Dixon fairly early in my painting career and at a time when I was doing more minimal work,” says Mell “I saw him and he blew me away because he did things already that I had only imagined doing with my art at that time. Early on, I met Dixon’s last wife, Edith Hamlin, who was a painter too as well as his son John Dixon and I arranged a helicopter flight for them because she wanted to go where her and Maynard had painted together.”

The trip is still a major milestone in Mell’s art career. 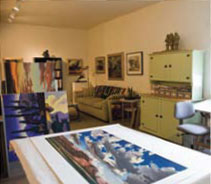 A new lithograph for Vermillion Cliffs.

“It was a beautiful experience,” says Mell. “I remember one part where we landed on a beach in the upper Verde River and she got out and started talking about their life together. She loved the trip and gave me one of his drawings in appreciation of the trip.”

The drawing was the first of several original Dixon drawings and paintings that have found their way into Mell’s private collection. 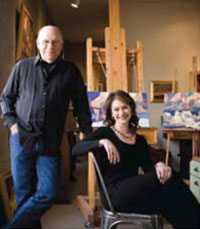 Mell and his wife Rose Marie have been married for three years.

“He deals with the dynamic design of nature,” says Mell. “And I do that in may own way, too. It’s a simplicity of things and just the dynamic energy of natural forms.”

Mell’s pure love of looking and love of design – which began when he was a child and dreamed of becoming an automobile designer – is really the inspiration to both the paintings and sculptural work that he seems to be either thinking about or working on every single moment he spends in the studio. 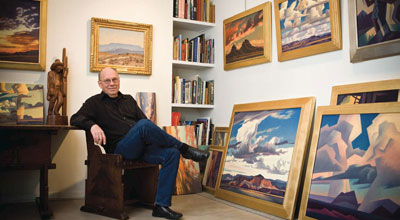 Mell seated in front of one of his most prized possessions, a 1927 Maynard Dixon painting titled Smoky Morning Virgin Valley Nevada.

“I’m always looking for something fresh, something I haven’ seen and that strangely enough always seems to come from the past,” says Mell. “The more you explore, the harder it is to find new guys you don’t know about, but occasionally something comes up. I look at their work, see how they put things together, and then it might trigger something in me. Sometime, it’s easy to get stagnant. Staying fresh is a job in its own right and I just want to turn it into fun, into the adventure of finding something new”

Always a lover of well-designed objects, Mell is a classic car buff, participates each year in the Phoenix Art Museum’s Copperstate 500 and owns two vintage cars – a 1941 Buick and a 1982 Corvette convertible. While both cars suffice for Sunday drives with his wife of three years, Rose Marie, the Corvette is one of his most prized-possessions and he has held on to it now for over twenty years.

“It’s the art of the car, at least as much as the performance that interests me,” says Mell. “I wanted to be a car designer when I was a kid and I’ve always loved the design of automobiles. The tow pieces I have are based on the style of things. I also still kick myself for selling my ’36 Desoto Airflow Coupe. It was one of the very first stream lined American cars.”

Parked in front of his studio, the Corvette currently provides an occasional distraction for Mell as he prepares for his newest one-man show at the Overland Gallery in downtown Scottsdale. This show will showcase his diverse range of painting styles and genres and will include his traditional landscapes, his more abstracted landscapes, several figurative pieces, some cactus blossoms, and, of course, those desert skies that Mell is so famous for. 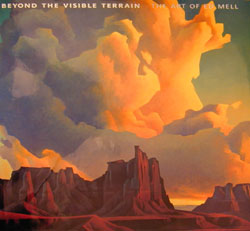 Don Haggerty, in his 1996 book, Beyond The Visible Terrain: The Art of Ed Mell, describes those landscape paintings perfectly. Haggerty writes:

“Embedded on canvas, watercourses meander as curves toward the skyline, buttes and mesas lie jumbled about the terrain, and rock spires reach skyward, erect like galleons in fleet, prepared to skirt slopes and sail over the horizon. Clouds arch and billow over the land, their definable shadows a counterpoint to the landscape. Like the topography, the clouds seem constructed by ancient gods, their shapes companions to the landforms below.” 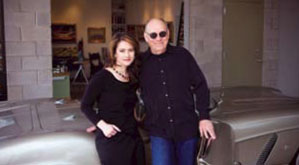 Mell and his wife Rose Marie at one of his art openings.

Mell sees the two distinct styles of landscape painting as being intimately connected and dependent upon each other.

“What happened is that the more angular work evolved into a more natural style and at a point I’ll revisit the angular work in more abstracted way,” says Mell. “ I paint in two different styles, these landscapes. I like the discipline of painting realistic landscapes and doing abstracted stuff is in most cases more imaginary.”

Mell started painting flowers in the late 80s. The cactus blossoms came not longer after that and also serve as a way to keep the energy flowing in the studio at all times. 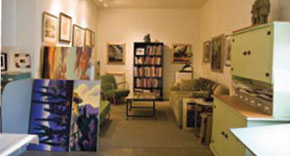 “It’s liberating,” says Mell. “Like you are using different parts of your creativity and then one gets tired and you can move on and do something you haven’t done in awhile. I started painting the flowers in general to have a different palette and deal with something completely opposite of a broad landscape, a macro look at a flower and probably just from needing something fresh to do. I put a couple in the gallery and all of a sudden I found another audience.”

At the end of the day, Mell is a painter who is completely in love with every aspect of the painting process. He is prolific and unrelenting, painting as if he is on a mission and not wanting to miss a single moment with the stuff.  Mell’s wife, Rose Marie, talks about accompanying Mell for a relaxing weekend at their home in Prescott, Arizona, about two miles outside of Phoenix, only to have it turn into another weekend in the studio. 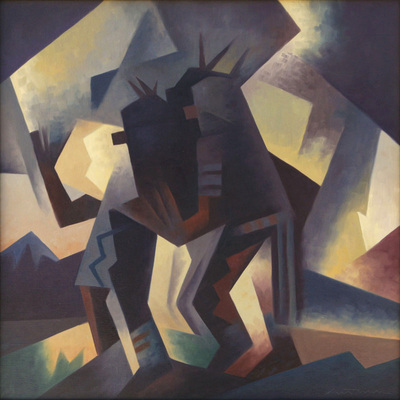 “He has a studio up there as well,” says Rose Marie. “And, we’ll go up there to relax and at the end of the weekend, I’ll look over and he has seven or eight new studies completed and he’s taking them back with us.”

For Mell, the studies are the key. His studio is packed with small compositional and color studies done on linen on board that Mell continually refers back to and uses to plan the larger pieces. 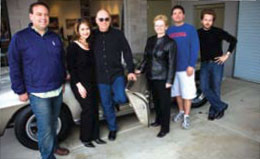 “To me, developing a painting starts out as a small idea you rough out and then I might do a second study before moving on to the larger painting,” says Mell. “They are important because that’s where you figure out everything out. I always keep them around and they are always so easy to have at hand.”

Mell’s latest work for his new exhibition also seems to have more figurative work than past shows.

“I feel that in my figurative pieces, I’m pushing the abstraction,” says Mell. “I found a new language with my abstraction and I’m enjoying seeing where that will take me. Each one starts out as a small study and they invent themselves as I’m working through them. Exploring is exhilarating, as I’m always trying to find something new and fresh in this world. It’s hard because a lot’s been done.”