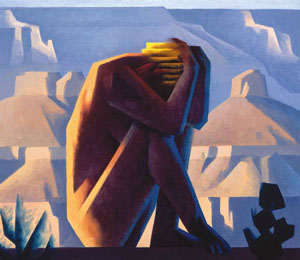 Influenced by a gamut of painters, from European Modernists to American Modernists, to Maynard Dixon and the Taos Founders, Ed Mell's work reflects all these along with his own contemporary flair. Throughout January Medicine Man Gallery in Tucson will feature Mell and his new works that include several figurative paintings, landscapes, and a few bronzes.

"It's always a continuum, it's a slow evolvement," Mell says of his art. "There will be some traditional landscapes and more abstract themes, and moving back and forth between those two." 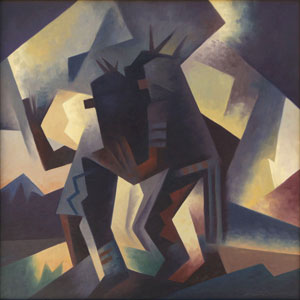 One particular painting, Canyon Figure, was completed in 1998 but Mell kept it in his personal collection - until now. Medicine Man Gallery owner Dr. Mark Sublette liked the piece so much that Mell decided to publicly unveil it in the gallery. This more abstracted piece depicts a nude on the edge of a canyon with head tucked down.

"It's an environmental statement," Mell says from his studio in Phoenix, Arizona.

Another new piece titled Western Cliffs was inspired from a study he did on a painting trip to Utah with fellow artist and friend, Gary Ernest Smith. These breathtaking mesas near Boulder Mountain frequently find their way onto the canvas.

Rather than reveal the thought behind each work he creates, Mell prefers to let the viewer interpret the image. A strong example of his abstract approach can be seen in Time and Spirit, which reflects the artist's Southwestern influences. When titling his work, Mell says sometimes they're very important while other times they're opaque. In this piece, however, he admits the title is very important: it's ambiguous. 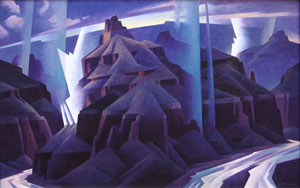 Mell's study titled Primal Storm captures the foreboding aspects of the Grand Canyon. The image was also used in the 2004 poster promoting the Grand Canyon Music Festival. The native Phoenician has been producing collector's posters for the festival since 1985, its second season. 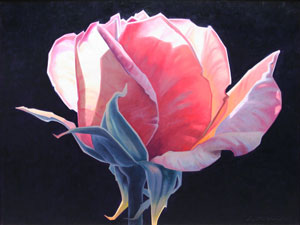 Throughout the years, Mell has constantly changed the subjects he depicts and the techniques to capture them. In the late 1980s he began painting flowers and then cactus blossoms in order to keep the energy flowing in the studio. Mell revisits such energy in the new piece titled Carmine Rose. Blending strong colors and strong contrasts, this image captures the innocent beauty of a single rose in a simplistic manner.

"Early on in my career, when I felt stagnant in painting landscapes, I liked changing the color palette and perspective, so I started going for flowers to get away from landscapes.  I found that the more I moved around the more I kept fresh in all areas," he recalls. 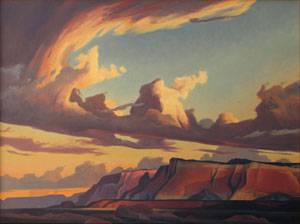