The curved line is one of elegant motion.  A spinning bike tire, a breaking wave, the natural flex of a foot as it pushes off the ground during a sprint – all action based on curved lines.  Even the earth, a heavenly arrangement of curved lines, evokes motion with its constant spin on a curved trajectory around the sun. 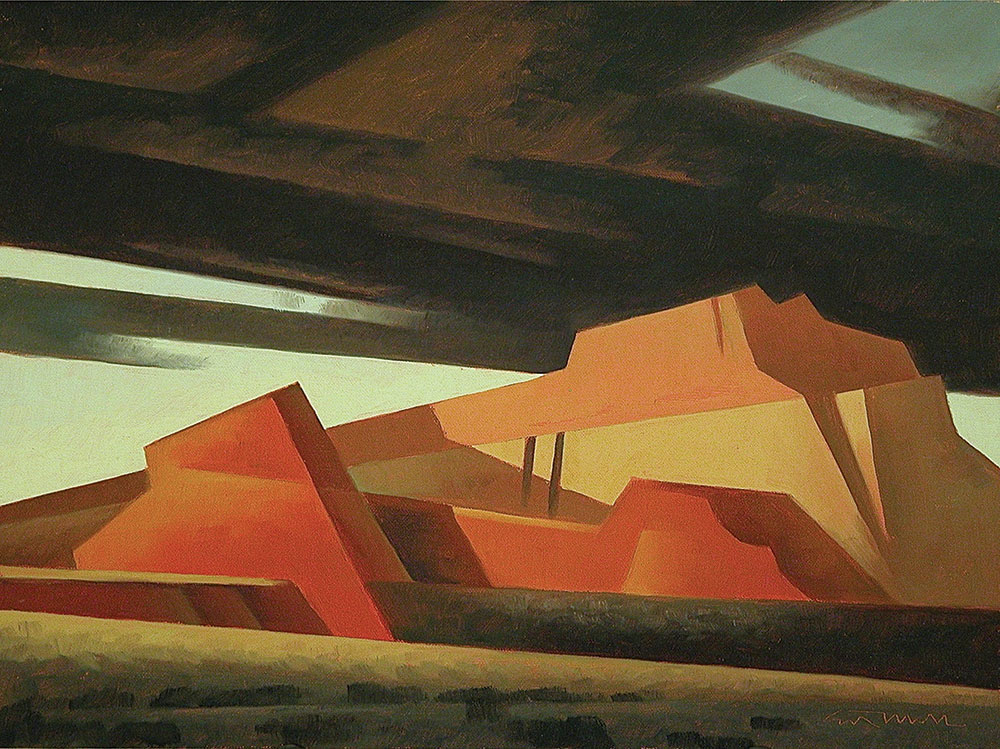 Ed Mell doesn’t outright reject the curve, but it’s a rare artifact in his abstract work, which evokes motion, even fluid and wildly kinetic motion, with nothing but straight lines arranged in his distinctly modernist style.  It’s a style he developed over a decades-long career in Phoenix, where he’s taken his angular and abstracted desert views and quietly, humbly even, become one of the most respected artists in the state.

“It took me many tries to figure out my mental approach to painting.  It sort of built up over time as I expanded my abstract vocabulary.  It’s evolved with me over the years.  My early modernist works were very minimal, and didn’t have very much abstraction,” he says.  In his studio, in a cozy corner, hang two of his early works that confirm his straightforward approach during his early art career.  One is a painting of a nearby home, its archways creating inviting walkways to a front porch, and the other is of an old farmhouse, its simple shapes and lines creating a pleasing scene.  He says, “I’ve done work in both realistic approaches and modern, and I’m fortunate that I can switch back and forth.  It always keeps me fresh, even when I’m mostly working in abstraction.”

Mell adds that abstraction is often a mindset, one that can’t be forced.  “Some days I’ll come in to do an abstract piece and it just doesn’t feel good, so I’ll put the piece aside and return to it later,” he says.  “The beauty of art is that there are no rules, and sometimes you just have to go for it.”

The artist will debut a dozen new painted works, and possibly one new bronze piece, at a new show on February 26 at Mark Sublette Medicine Man Gallery in Tucson, Arizona.  The works, featuring many scenes reminiscent of the Arizona desert, are done in Mell’s trademark style: straight lines, balanced compositions, moody colors and scenes that depict movement, from brewing storm clouds and walls of rains to rock striations and evocative horizons.  Pieces include Weather Above, in which Mell paints the edge of a storm front crossing over a desert vista, with the storm’s leading edge dousing the sandy earth with a slanted blade of rain; and Slanted Mesas I, a sunset scene composed almost entirely of slanted horizontal lines, except for two vertical scars in a cliff face. 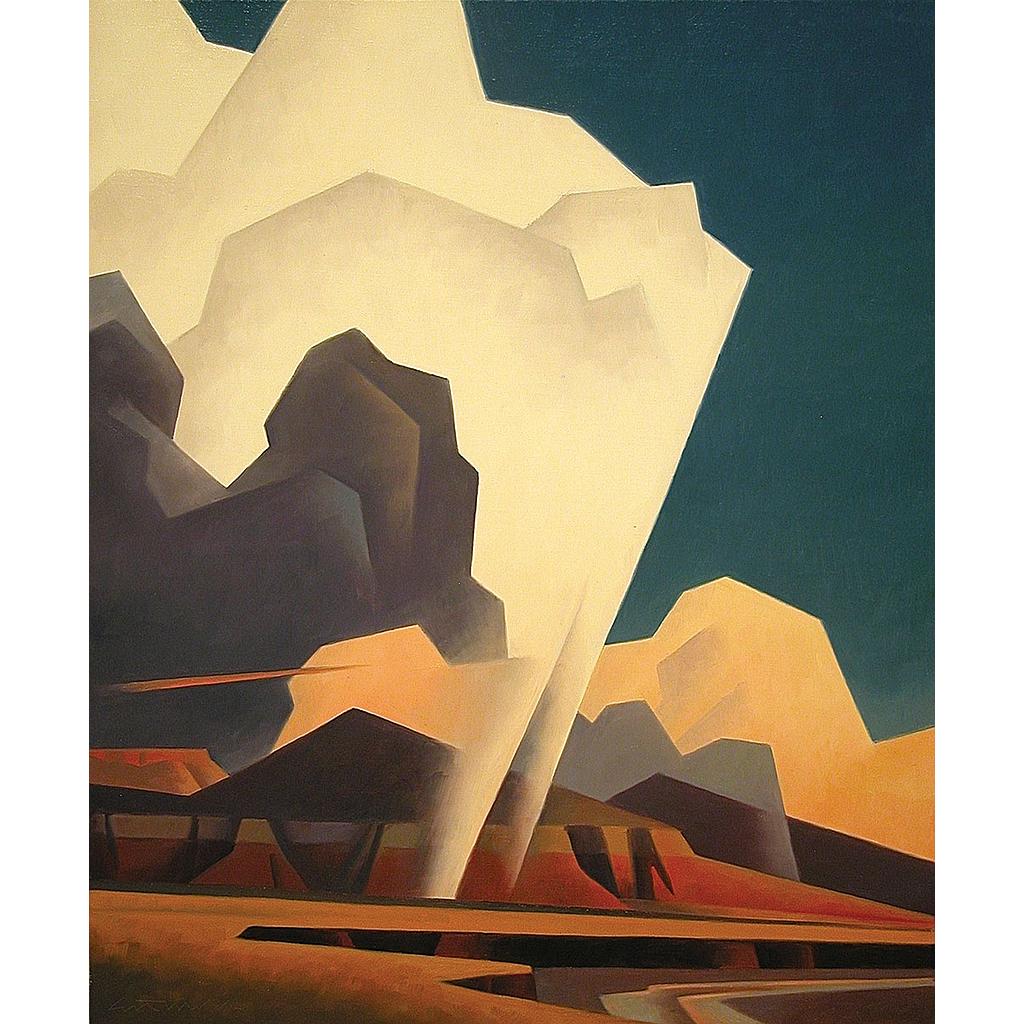 When Mell first began experimenting with images of the Southwest after a career as an advertising illustrator, he did so largely unaware of the history of modernism in the West and of cultural and artistic zeniths in New Mexico’s art destinations, Santa Fe and Taos.  “I was coming from New York, so I was mostly unaware of art of the West.  I discovered Maynard Dixon, Raymond Jonson, Victor Higgins, and Andrew Dasburg,” he says.  “I learned quickly that art is a continuum, and that very few brand new thoughts are made anymore, which means you have to take what’s already out there and develop it further.  You push it further than anyone did before.  Eventually you develop your style enough that the art starts to invent itself.”

Today Mell’s work is a singular force, and few contemporaries have styles comparable enough to join him in the same sentence – Mell does mention Merrill Mahaffey and Gary Ernest Smith, both artists who “have a modernist bent and really go all the way.”

Utah artist Smith has painted with Mell before on multiple occasions, and admires his techniques and perceptive eye.  “Ed has an ability to take a subject and to reduce it to its very essence and to pick out the very best qualities in the most simple and direct ways,” Smith says.  “He is very definitive about what he does.  He does not fumble around about where to go next or how to do it.  I’ve painted with him many times and I’ve noticed that he interprets what he sees so quickly.  You’ve got to be able to rely on your own intuitions and to gravitate to those things that interest you.   It’s like the saying, “It takes half of your life to learn how to do it and the other half to figure out what to do with it.’  Ed has discovered what to do and he’s done it in a unique way ever since.”

His curve-less abstraction of the Southwest has kept him busy: in 2012 he was commissioned to design a stamp for Arizona’s centennial celebration; he’s currently designing artwork for an Arizona stage production of Zane Grey’s Riders of the Purple Sage; he’s representing his home state in a BBC special airing in January 2016; he started his own gallery in Phoenix; and all of this on top of his normal art commissions and gallery exhibitions.

“I’m honored people feel so strongly about my works,” he says.  “It took me time to develop it, and it’s evolved with me over the years, so it’s exciting to see where it can still take me.”