Opening March 10, the Booth Western Art Museum will present  Ed Mell: New West Visionary, a traveling retrospective exhibit featuring 40 paintings and sculpture by the world-class artist. The exhibition will be on display in the museum’s Temporary Exhibition Gallery through August 21. 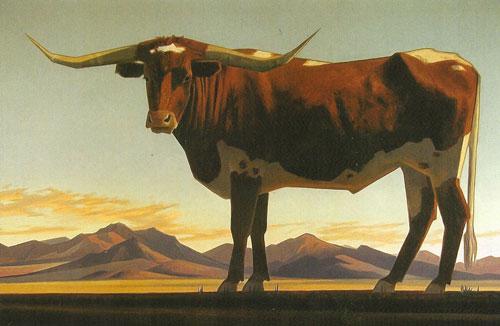 “We believe Ed Mell is one of the most important artists working in the West today. His distinctive images of the Western landscape capture both the raw beauty and power of the Southwest. We have several excellent examples of his work in our permanent collection galleries, but we are excited to have our audience experience the full range of his subjects through this exhibition,” says Booth Museum Executive Director Seth Hopkins. “During the opening weekend guests will be able to view both the Mell exhibition and our blockbuster Ansel Adams show, providing a rare opportunity to compare dramatically different ways in which artists might approach depicting the West.”

The Tucson Museum of Art launched the traveling exhibition in February 2010. From there it headed north to the Museum of Northern Arizona. Its run at the Booth in Cartersville, Georgia, is held in conjunction with the museum’s Southeastern Cowboy Gathering of which Mell is also this year’s Featured Artist.

The public is invited to meet Mell during a reception the first evening of the Cowboy Gathering, from 5 to 7 pm, on Thursday, March 10. At 7 pm, the Arizona native will present a lecture on his artistic style and career highlights. Following the talk Mell will sign copies of the official souvenir Gathering poster featuring his iconic sculpture of a bucking horse called Jack Knife.

Mell humbly reveals that he’s enjoying all this attention.

“I like it. I’ve had a very good year and…I feel very fortunate,” he says. “Having a traveling museum show creates a lot of interest and people discover you who may not be aware of you.”

Best known for his dramatic geometric views of Southwestern vistas, often combined with powerful weather elements, Mell credits Maynard Dixon as a major influence in his career. He approaches the landscape from two perspectives: expressive realism and abstraction. He suggests land forms and cloud formations with lines and planes alive with energy and sublime theatrics.

Mell’s repertoire also includes floral and figurative subjects that incorporate elements of abstraction and cubism, all of which will be featured in the exhibition. From the Booth Museum, Ed Mell: New West Visionary travels to The Forbes Galleries in New York City where it will open in September 2011.