Published online courtesy of Art of the West, September/October 2014 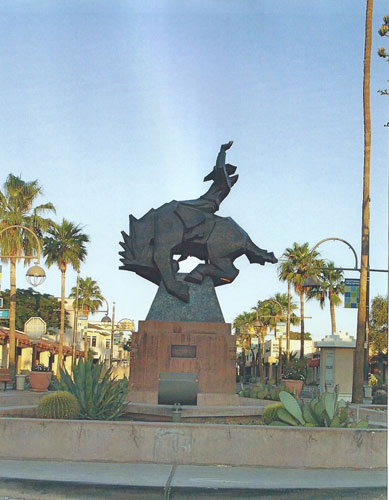 "Jack Knife was my first large bronze.  It was done with the Scottsdale, Arizona, symbol - a cowboy on a bucking bronco - in mind.  It is still one of my favorites.  Simplified power"

A paintbrush or lump of clay in the hands of Arizona artist Ed Mell becomes transcendent. What his eyes see often becomes transformed at his hand. Puffy clouds, muted purple mountains framed by a peach halo, as the sun slips behind them, become infused with vibrant, electric energy. Forms and colors take on dazzling, brilliant hues and shades. Edges—exact and angular—are honed to razor sharpness. Colors pop. Small plants become omnipresent with captivating clarity, while their surroundings recede.

Despite a seemingly abstract quality, Mell`s images and scenes seem curiously natural. More than merely rendering  a scene, they produce the sensation you'd experience as a storm rages over the moment - it is all you see. Mell explains his method quite simply. He works from nature and wants to do more than offer a realistic image; his goal is to elicit an emotional response. “In order to duplicate nature, I like to push [my art] a little farther, and impart the impact that nature has in real life,” he says. Mell’s artistic process seems to be more about random access than orchestrated design. While composition, color, and structure are the foundation of his art, those elements often evolve from simple marks he has laid on canvas or in clay. 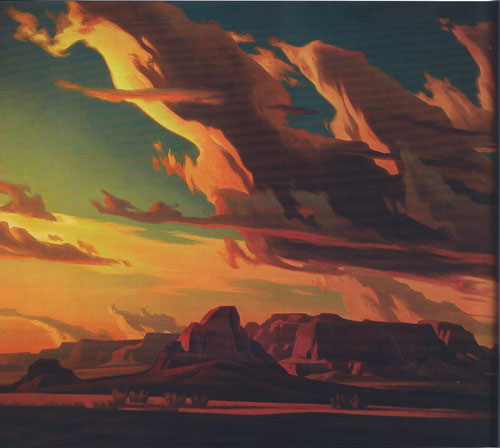 "I love the area between Kaibito and Page, Arizona.  Great formations.  Strength in color."

Mell describes his process, saying, “I often take canvas or clay and just put arbitrary marks or lines on them. Then I let my imagination fill in and move things around. I like that, because the end result is not what your mind would normally [let you] do.” In an attempt to clarify what he has just said, Mell explains how, as children, he and his brother used  to draw scribbles on paper. They then would make faces from those squiggles. "To me, [when I paint or sculpt], it’s like using the same part of your brain,” he says. “I make the marks and let them talk to me.”

Mell is quick to add that not all of those experiments are good, or even worth keeping, but the method challenges his creativity and produces some surprising results. His style and technique—vivid and charged— are derived from Mell’s love of fine art and commercial art of the ‘30s and ‘40s. ‘That aesthetic pushed me in the direction I’ve gone,” he says. “I just started playing with it. My first work was minimal, then it evolved to include more information, and finally became my version of realism. Then I started revisiting my modernist side, so I actually work in two styles now: realism and modernism."

Best known for his painting, Mell took a stab at sculpture in l985, creating equally energetic and bold designs in clay. “Basically, I had an idea and bought some clay,” he says. “Because clay is so forgiving, I just played around and worked with it [for] an entire summer. I’d never done sculpture before, but my attitude is that, if you have a good eye, eventually you can figure it out. I think I have a good eye. Because it’s oil-based clay, you can work it and rework it as long as you like. So, I eventually figured out how to sculpt. 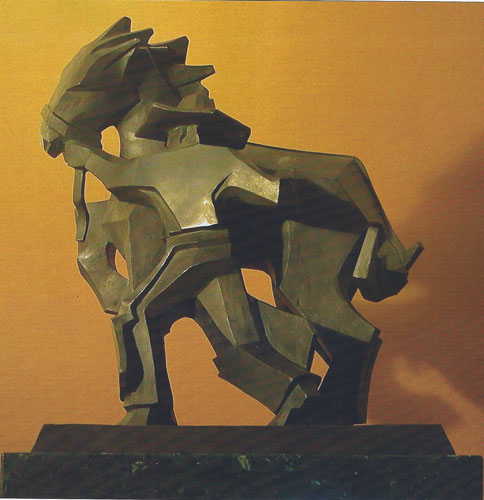 "I like to work with the power struggle between man and beast.  I enjoyed working with the volume of this piece."

By the end of that summer Mell was satisfied and took the sculpture to a foundry. It was cast, and he sold all of the pieces in the edition, which set the wheels in motion for a new challenge: sculpture. Mell emboldened his new medium with his signature style. His use of angularity and sharp edges evokes three-dimensional adventure, wild­ ness, and splendor. In sculpture, as in his painting, Mell’s intuition drives his creations. It almost seems as though his art has a life of its own. “It’s interesting; when I am creating something, I can accidently make a shape, and it sort of suggests something that takes me somewhere [emotionally],” he says. “Those pieces start out as little studies, and they evolve. I’m not 100 percent sure where they’re going, until they start talking to me.”

Mell’s love affair with art began with automobiles. As a child, he was interested in automotive design and spent his time reading about, looking at, and drawing cars. “I just thought cars were the coolest thing in the world,” he says. Although his love of cars has not abated, today, instead of drawing them, Mell owns—and drives—seven vintage cars. He also participates in the annual Copper State 1,000, a car rally and fundraiser sponsored by the Phoenix Art Museum. He has done so for the past 25 years and also is the official artist for the event. "They brought me on as their in-house art­ist [25 years ago], and at first I just did a few posters,” he says. “Now I do paintings of the region, where we will go, and the museum sells them as a part of the fundraiser.” 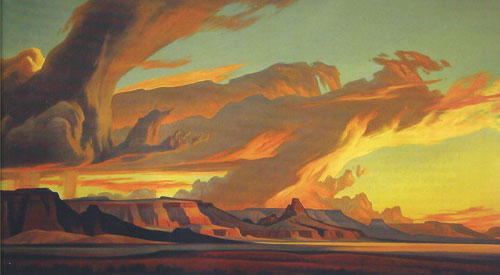 "I was trying to convey the power and overall glow of sunset on the open desert on the high plateau."

Mell’s love of automobiles led him to attend Phoenix Junior College, where he earned an Associate of Arts Degree, and later to the Art Center College of Design in Los Angeles, California, to study illustration and prepare for a career as a commercial artist. He spent the summer of 1967 working for Young and Rubicam in Philadelphia, Pennsylvania, the second-largest advertising agency in the world. After graduating the following year, Mell landed a job as a junior art director for Kenyon and Eckhardt, a large advertising agency in New York City. But it didn’t take him long to discover that commercial art wasn’t his passion. Within a year, Mell and a friend struck out on their own and founded Sagebrush Studios, an illustration studio that attracted an impressive list of clients, including National Lampoon, Esquire, and Psychology Today magazines, as well as Cheerios and RCA. And yet, life in New York City began to wear thin. Initially, Mell had given himself five years to absorb New York, its culture, and the art scene. By the early 1970s, he was asking himself the existential question that most young people ponder at some point: ‘What do I really want to do with my life?' 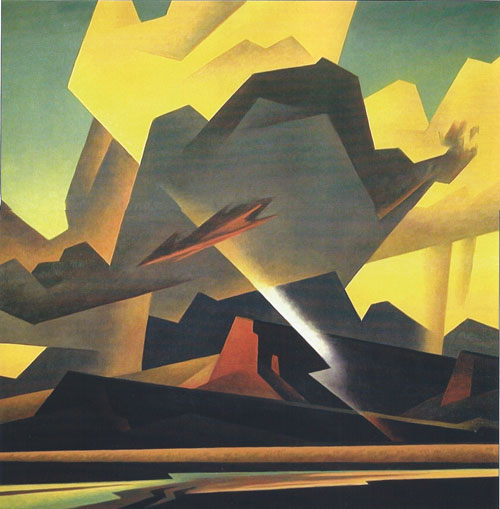 "This is one of my more abstracted modernist pieces.  These pieces start as a small study, where I can beak my own rules and see how they work and then [are] realized as a larger finished piece."

The city’s magnificent museums—such as the Whitney, the Museum of Modern Art, and the Metropolitan Museum of Art—were a source of inspiration, and commercial art had helped Mell to develop and hone his skills, but something was missing. So, in 1970, when a friend invited him to teach art classes on the Hopi Reservation in Phoenix, Arizona, Mell jumped at the opportunity. Within three years, he had returned to Phoenix, his birthplace, on a permanent basis. He married, set up an illustration studio, and raised two sons—Carson, now a writer in Silicon Valley, and Taylor, a painter forging his own path. Soon, however, Mell left commercial art behind and eagerly dove into fine art. Although the 72-year-old artist would like to do more sculpture, right now is not the time. Mell has been commissioned to do set design for an opera based on the Zane Gray novel, “Riders of the Purple Sage,” an endeavor he describes as one of the highlights of his career. Working directly with the opera’s director, Carl Bohmler, to develop the fixed sets on the stage, Mell says his ani­mated paintings will be projected onto the set.

“I have to paint the landscapes separate from the sky, so they can move the clouds behind the land­ scape,” he says. “It’s challenging to me, and I can’t think of anything bet­ ter than having one of my paintings moving on a screen that is 35 by 70 feet long.” The opera will be per­formed in the recently completed Arizona Opera Center in Phoenix in 2016. Mell’s excitement for the venture is palpable. He is eager to immerse himself in it, but he did recently take time out for a two-week vacation in Hawaii with Rose Marie, his wife of nine years. 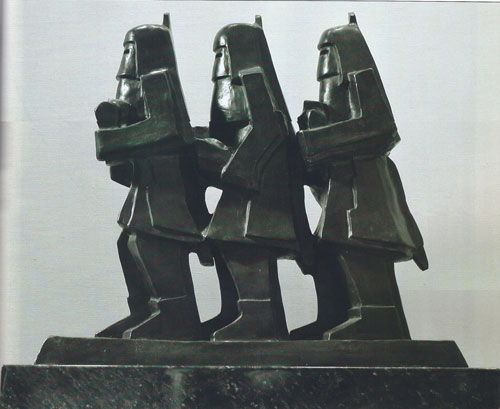 "This bronze deals with the rhythm of ceremony."

It’s obvious that this septuagenarian has no intention of resting on his laurels. Mell thrives on the challenges that spark his creativity and keep him engaged. Where it will take him next is anyone’s guess.

Mary Nelson is a writer living in Minneapolis, Minnesota