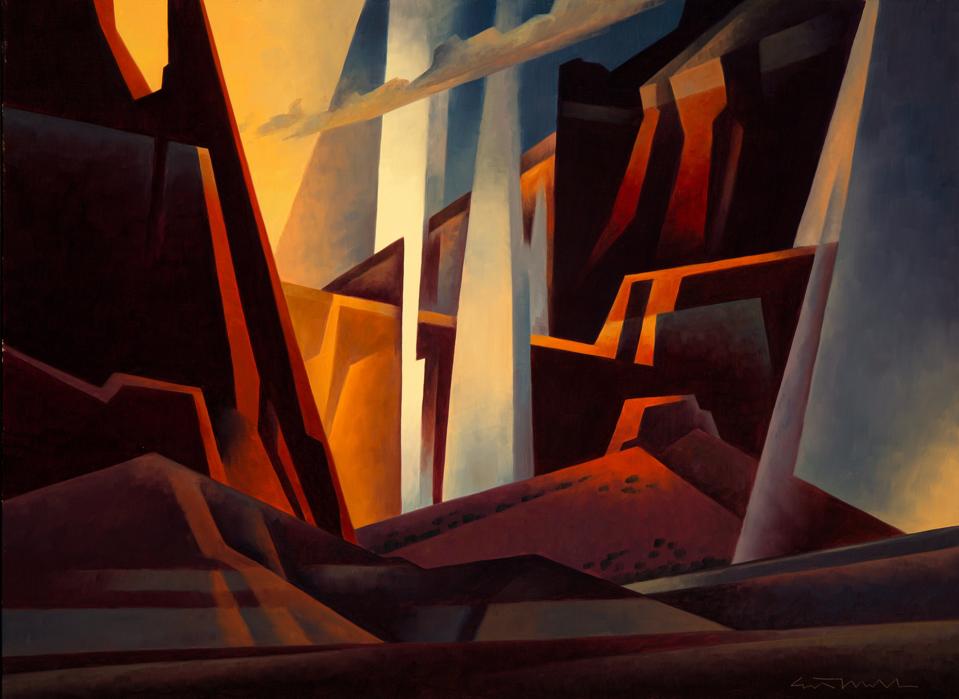 “Visual language” is the art world term used to describe each artist’s individual style. An artistic fingerprint. The combination of brushstrokes, medium, scale, subject matter, color combinations–everything which goes into making an artwork.

The greatest artists have a unique visual language.

It’s how Ed Mell (b. 1942) distinguishes himself from every other contemporary painter in the Western genre or outside it.

Mell employs an unmistakable visual language which you can see for yourself at the Desert Caballeros Western Museum in Wickenberg, Arizona during the exhibition " Ed Mell's Southwest: Five Decades" through March 8 and at Mark Sublette’s Medicine Man Gallery in Tucson, Arizona for “Ed Mell: One Man Show” February 21 through March 13.

“Ed has been a tour de force for the last 35 years in the contemporary Western art scene,” Sublette, who has represented Mell’s work for 23 years, said. “His modern interpretation of the West and its inhabitants has changed the way collectors, and other artists, view the subject.”

In recognition of those 35 years and to coincide with its exhibit, DCWM honored Mell as the seventh recipient of its lifetime achievement award.

“When I look in the mirror, I can say, ‘yeah, I guess I’m that age,” Mell joked of the distinction.

Levity aside, he does appreciate the award.

“The show’s an honor,” Mell said. “To do a retrospective at the museum, and of course receiving the lifetime achievement award is great, but I think the show, that was a labor of love with me and people that work with me; together, they're pretty important.” 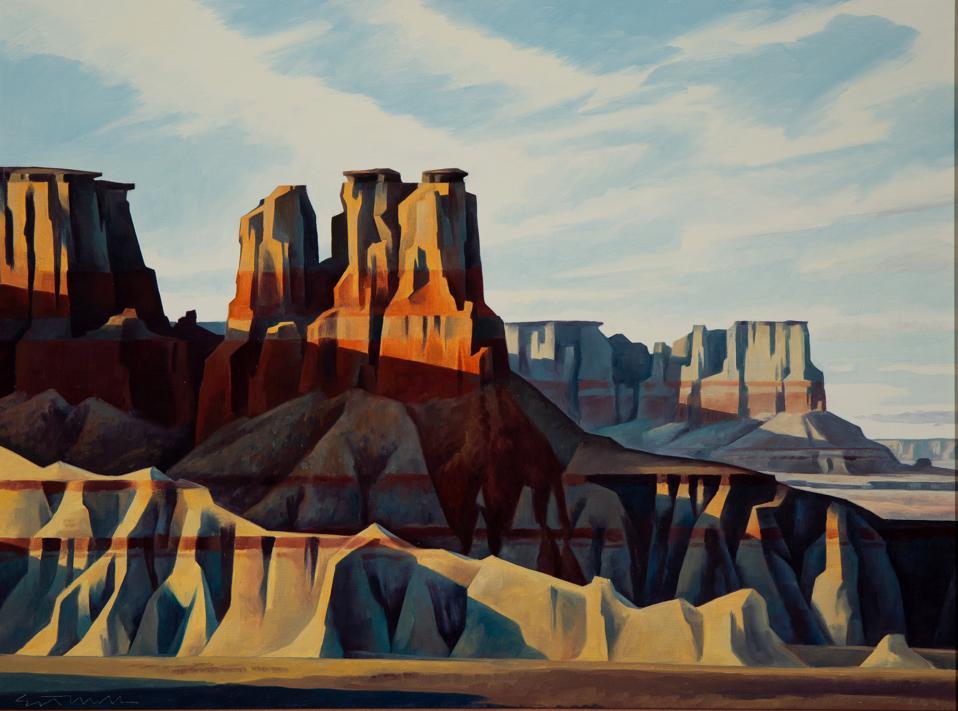 “They say that imitation is the sincerest form of flattery, but I think it’s an insincere form of flattery,” Mell said in jest. “I really don't mean to whine, as long as (other artists) bring their own vision… I don't own it… as long as they're not imitating my approach, I don't have a problem with it.”

Mell’s artistic career took him to both Los Angeles, for art school, and New York, where he found success as art director at a prestigious advertising agency then running his own illustration studio. The skyscrapers and lights of Manhattan, however, couldn’t compare to the mountains and canyons of the Desert Southwest and the Four Corners region. After 10 years away, Mell returned to Arizona in the early 1970s.

While living in New York didn’t suit him, his time there clearly made a lasting impression. Mell’s landscapes are decidedly modern and have been for decades. Design plays a crucial role. Art Deco abounds.

Lifetime achievement awards often signify the end of artistic careers. Not so for Mell who continues looking forward to painting.

“Mell doggedly embraces his chosen profession, rarely missing a day in the studio and always striving to improve his compositions and artistic chops,” Sublette said.

“Ed Mell’s Southwest: Five Decades” features over 75 of the artist’s oil paintings, many out of his personal collection, along with works on paper, pastels and bronze sculptures. The show also includes Mell’s less heralded representational work.

What’s next for him?

“I'm ready just to paint and put them out there,” Mell said of the remainder of his career. “I'm 77-years-old, I'm kind of tired of painting with a gun to my head.”

His feeling of a pressure to produce comes from decades of commissions, show requests and high demand from collectors. While most artists working far in advance of contemporary colleagues like Mell often wait years for the marketplace to catch up to their style, he suffered no such fate.

“Mell's cutting-edge paintings and sculpture immediately resonated with western and contemporary collectors alike,” according to Sublette. “Not unlike a famous musician whose fans can run the gamut from country to rock and roll, Ed has managed to seamlessly traverse two disparate art worlds successfully.”

Mell struggles when asked why he thinks collectors respond fervently to his work.

“I think I bring something new to the to the Western landscape and I try to treat it with reverence and impact it with power and in many cases the drama that you really see out here,” Mell said. “Everybody has a dream of the West and I think what I'm doing plays a part in that.” 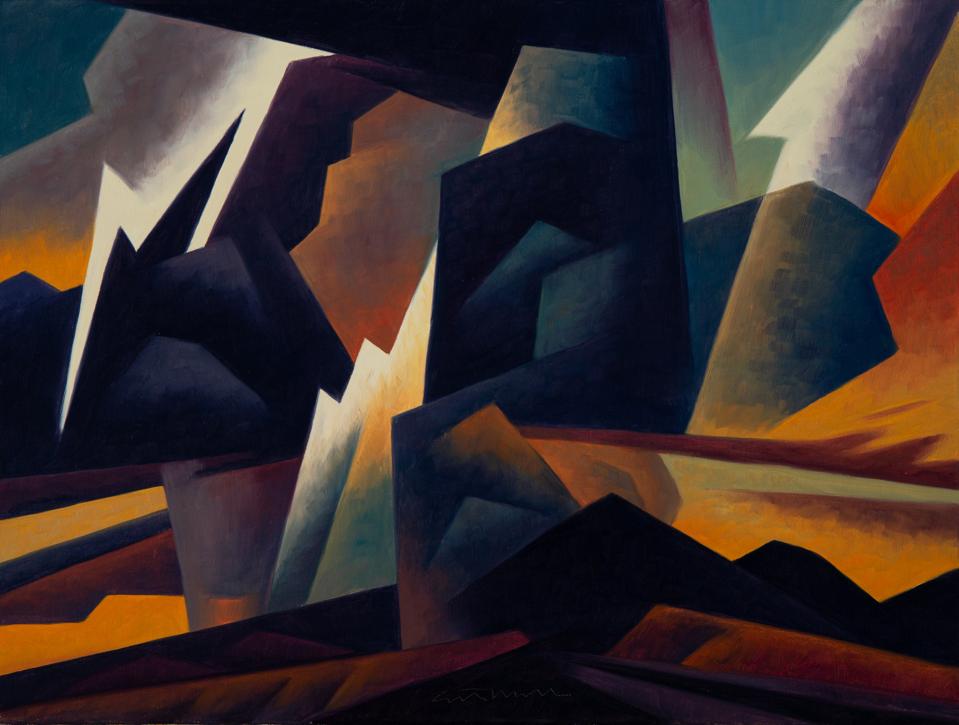 If your dream of the West is filled with art listen to Sublette’s “Art Dealer Diaries” podcast which covers the Western genre in depth through interviews with artists, dealers and curators.