The Rockwell Museum of Western Art in Corning, New York, recently acquired Ed Mell's famed Jack Knife sculpture for the museum's permanent collection. The nearly 5-foot-tall bronze, which also stands in the heart of the Scottsdale Arts District on Main Street in Scottsdale, Arizona, will be on display in Buechner Park - a green space created by Corning Incorporated located kitty-corner to the Rockwell Museum at the intersection of Denison Parkway and Cedar Street.

"We are pleased to present a new public art piece in our vibrant art-focused community of Corning, New York," says Kristin A. Swain, executive director of the Rockwell Museum of Western Art. "The Rockwell Museum resides in Corning, which is recognized as one of the nation's best small town art communities. A sculpture by leading artist Ed Mell contributes to that reputation. Corning and the Rockwell Museum of Western Art are proud to now be in the good company of such strong art communities like Scottsdale and Tucson, where bronze casts of Jack Knife are also on display." 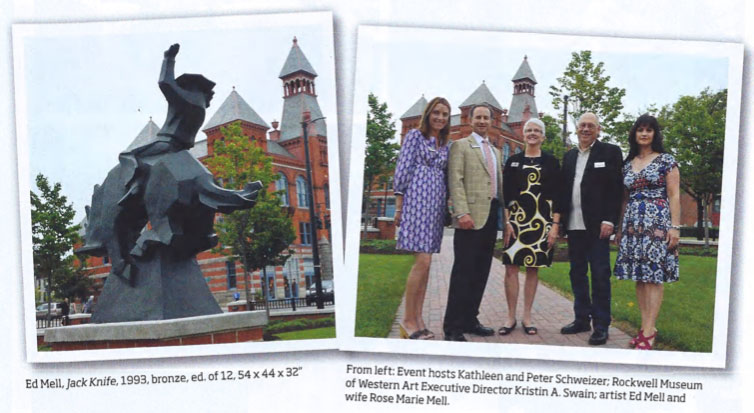 This particular cast, purchased by the museum through Owings Gallery in Santa Fe, New Mexico, is the last of 12 full-size bronze casts to be offered for sale; the other 11 casts are held in various private and public collections.

"Jack Knife has a reverence for the Old West," says Mell, an Arizona native. "It is not traditional, but yet it has a traditional theme. The angularity accelerates the power and energy of the rider and horse, more than an accurate depiction."

Mell is mainly known for his modernist landscapes of the Southwest, and just last year had a painting chosen for the U.S. Postage Stamp honoring Arizona's centennial celebration. Mell created the award-winning monumental sculpture Jack Knife in 1993.

Buechner Park is named in memory of the late Thomas S. Buechner, an acclaimed artist, founding director of The Corning Museum of Class and longtime supporter of the Rockwell Museum of Western Art as well as the greater Corning community.