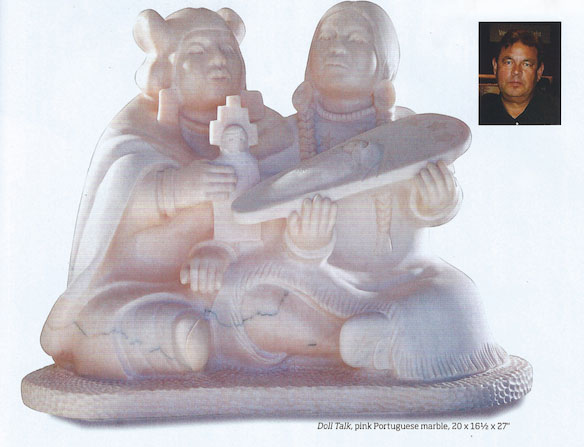 A consortium of Autry Trustees, including Sharon Rogers-McKay and Marshall McKay, Lora A. and Robert U. Sandroni, Constance K. and Leon J. Level, Marilyn B. and Calvin B. Gross, Saralynn and John J. Geraghty, and Jay H. Grodin, were instrumental in the purchase of the Autry Center's newest acquisitions.  Doug Hyde's work Doll Talk will now become part of its permanent collection.

Doll Talk, made out of pink Portuguese marble, depicts two traditionally-dressed Nataive American girls and their dolls.  One figure, a Hopi girl, wears the traditional squash-blossom-whorls hairstyle and is holding a Katsina doll. The other girl, of Nez Perce origin, wears braids and is holding a bagy doll in a cradleboard.  Both softly rounded figures are sitting atop a textured slab of marble.

"I was pleasantly surprised at the large number of children who visit the Autry.  The purchase of Doll Talk is really wonderful because it's a comparison of a Nez Perce with a Hopi girl, not only in their clothes, but also in their styles, hairdos, and the dolls themselves," says Hyde.

The sculpture, which was displayed during the 2011 Masters of the American West Fine Art Exhibition and Sale, won that year's Kenneth T. and Eileen L. Norris Foundation Award for Sculpture.