Doug Hyde - Spirits in the Stone

Doug Hyde - Spirits in the Stone

For Doug Hyde, scultpure is a collaboration between the artist and the medium itself

Join Doug Hyde on a trip to one of the quarries he frequents in Colorado or Utah, and you might at first think he was some sort of shaman rather than a sculptor widely respected for what he calls his “stylized” depictions of Native Americans and western wildlife.  A hammer in one hand and a gallon bottle of water in the other, Hyde walks the rough-hewn pathways flanked by walls and boulders of limestone or alabaster or marble, three of the many stone varieties he enjoys sculpting.  Spying a chunk whose color pattern, size or shape intrigues him, he’ll raise the hammer and tap the rock – not to break it free, but to hear it.

“I’m listening for a high-pitched, metallic, bell-like sound,” he says.  “That tells you there are no flaws in the stone.”  Explaining the technique later in his spacious sculpture studio about 20 miles away from his Prescott, AZ, hone, he reaches out and strikes a nearby block to underscore his point:  the rock rings out clear and true.  “But if you get a dull sound,” he continues, “that means there’s some sort of flaw in the stone.”  And, during carving, a flaw could well reduce a promising sculpture to rubble.

There’s an aura of solemn ritual to Hyde’s process.  He literally tests each stone’s mettle, assessing whether it is worthy of the vision that will eventually emerge.  Then, its inherent soundness ringingly confirmed, Hyde splashes the chosen block with water, as if anointing it.  “The water will set in the stone’s cracks,” he continues.  “So you see whether you can still use the stone once you’re split it.” 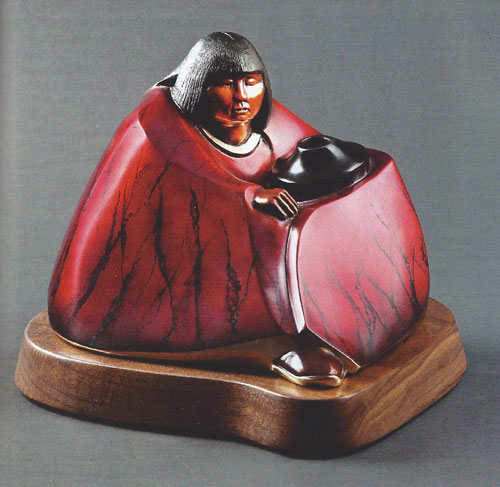 To witness Hyde’s works is to be overcome – sometimes gradually, sometimes swiftly – by the sense that his subjects have always lived within the stone, inhabiting it like spirits waiting to be revealed through his artistry and skill.  “I never know if it’s going to be a person or a bird or a fish or a combination of things,” he says.  “I always keep myself pretty open until I play with a stone a little bit.  I get the ideas not only from the shapes and colors but from lots of different things.”  He may have seen an animal outside his window or in the wild, had a conversation with a friend or family member, or read or heard some tribal history or legend.  “Something sticks in my head.  And then I’ll wet the stone in the studio to see the colors and patterns all the way around it and get an idea of visually what’s inside, and I’ll let it develop from there.”  Finally, he’ll go to work, utilizing an arsenal of m than 40 hammers, chisels, grinders, saws, sandblasters, and other devices arrayed on his studio wall.  Usually two to three months later, depending on a piece’s size and how many other sculptures he may have going, the process is complete.  Only then will he go on to produce his select, limited-edition bronzes.  “ I do almost all of my work in stone first,” he says.  “After that, I’ll do a mold from the stone and cast a bronze.”  By contrast, most artists working in bronze first create their sculptures “using a building-up process in clay,” he explains.  “But with stone, I do a takeaway process.”

Hyde’s aesthetic approach has come a long way from his first artistic efforts,  Back in the early 1950s on the banks of the Clearwater River in Lapwai, ID, seat of the Nez Perce Indian Reservation, he’d sketch while waiting for the fish to bite.  “My mother always encouraged me in that direction,” he recalls, “even though, in those days, everybody thought being an artist would doom me to starve to death.”

In his early teens, he took a summer art class offered to children in the tribe.  “We started out with butcher paper and black ink,” Hyde says, “and I apparently got the teacher’s attention because she gave me a set of oils.  But I never considered it anything more than something fun to do.”  Nevertheless, Hyde continued to excel in high school art classes.

Then, when he was in 11th grade, without Doug’s knowledge, his mother sent a portfolio of his work to the new Institute of American Indian Arts she’d heard was starting in Santa Fe.  “Next thing I knew,” says Hyde, “they sent a letter saying I was accepted to spend my senior year of high school there.”

Reluctantly, Hyde made the three-day bus journey to New Mexico in late summer 1963.  “I didn’t want to leave all my classmates,” he says.  But almost immediately, he was happy he’d moved.  “It was a wonderful experience.  You were allowed to put two weeks of orientation into any art subject you wanted, to try it out to see how it fit you.”  Having intended to study painting, Hyde soon found himself attracted to three-dimensional work.  “It felt so much easier to look at a solid object than at a flat canvas.  That’s when I fell in love with rocks.  The colors and shapes of the materials almost instantly gave you an idea of what they wanted to be.”

He was also learning from some of the best teachers around.  Hyde’s main sculpture instructor was the great Apache artist Allan Houser, who instilled in him a dedicated work ethic:  “If you want to be good at something, you have to put the time into it,” he advised.  Renowned painter Fritz Scholder taught him design, as did Lloyd Kiva New, considered the father of modern native fashion design.  Famed Hopi jeweler Charles Loloma mentored him in a key career-building strategy: “When you sell something, put a third of everything you get back into your work, so you’ll get better tools and better materials.”

A year later, Hyde decided to stay on for the Institute’s two-year college-prep program, continuing to sculpt in a private studio it provided.  “We had materials from almost anywhere and were encouraged to do experimental work,” he says.  Within that brief period, he completed some 60 sculptures.

He expected similarly stellar learning experiences when he entered the San Francisco Art Institute in the fall of 1966.  “But it didn’t take me long to realize I had nothing in common with the school,” he says.  “It was right during the Vietnam War, and 90 percent of the students were there to avoid the draft.  It was parties all the time.  But my tribe had paid for me to go, and I felt I was wasting their money.” 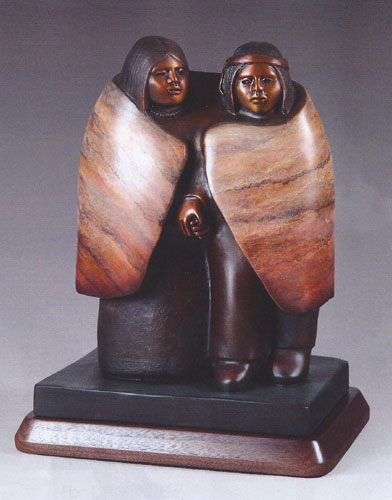 So, in January 1967, at the age of 20, Hyde enlisted in the Army.  Six months later, on his birthday, July 28, he received his private first class stripes and his orders for Vietnam.

Art was the last thing on his mind during his first yearlong tour of duty. “All I thought about was being on my guard, though in my letters home I would sometimes do little drawings” – mostly sketches of the bunkers in which he and his platoon mates took shelter while on patrol.

Barely into his second tour, in January 1969, Hyde was seriously wounded by a Vietcong hand grenade.  He spent nine months in the hospital recovering, finally leaving the service in September 1969.

Back home in Idaho, he got work at the umber mill, only to be laid off two months later. “Since I had experience with stone,” he says, “I went to the tombstone company in town and got a job with them carving the granite and marble.”  Suddenly, he had a wealth of sophisticated tools at his disposal and began using them to sculpt in his spare time.  “That was really my turning point. In just three years, I finished 10 of my own stone pieces.”  Those sculptures, along with one painting, were featured in midsummer 1972 in his first professional show, at the Northern Plains Indian Art Museum in Browning, MT.  Every one of the works sold.

Soon after, Houser invited Hyde down to work at the Institute of America Indian Arts in Santa Fe.  He signed on to teach night classes in sculpture, with the understanding the school would supply him with stone for free. “I brought with me all the tools and techniques I’d learned,” he says.  “Putting them on softer stones like alabaster, I completed over 20 pieces by that December, and sold everything.”

The following year, legendary local gallery owner Forrest Fenn signed him on.  “One of the wonderful things I learned form Forrest,” Hyde relates, “came about because he had me personally deliver every one of the pieces I sold at my annual show.  I was gone two months out of every year, crisscrossing the country – Chicago, new York, DC, Texas, Oklahoma, San Diego, all the way up the coast to Washington then across to Montana and Colorado.  People would come back and buy new works because of that personal connection.” 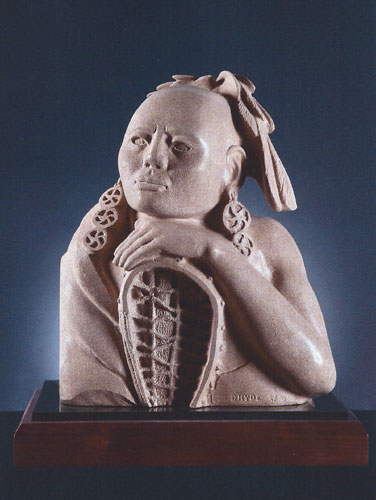 Modesty may cause Hyde to hold back from adding that his new works also sold so well because of how good they were.  Year after year, along with sales, his sculptures continued to garner accolades, securing public and corporate commissions and being added to significant collections nationwide, including the Heard Museum in Phoenix, AZ, the Smithsonian in Washington, DC, and South Carolina’s Brookgreen Gardens, “the holy grail of sculpture gardens.”  One of is proudest moments came in 1997 when Hillary Clinton welcomed hi and his works to the White House as part of an exhibition of 20th-century Native America sculpture in the Jacqueline Kennedy Garden.  “As an artist,” he says, “you can’t buy that kind of notoriety.”

Celebrating his 67th birthday at the end of this month, Hyde could easily sit back and bask in the notoriety.   And he is doing a bit of that, after his own fashion.  “This past year,” he notes with a laugh, “I’ve started taking off one day a week per the request of Debbie,” his wife of 23 years.  The other six days he’s in his studio, hard at work on multiple projects, surrounded by blocks of stone – some maybe just 14 inches across, others 9 feet tall and weighing more than a ton and half – from which the spirits are at various stages of release.

“The best time for me ever,” he says, “is when the whole idea of a sculpture finally comes together.  Suddenly, I know what it’s going to be.  It’s so exciting to care into a stone and see the directions it will pull you.” 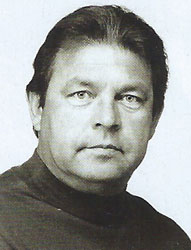 Norman Kolpas is a Los-Angeles based freelancer who writes for Mountain Living and Colorado Homes & Lifestyles as well as Southwest Art.