Dorothy Brett was born into great privilege in Victorian England and went on to become a painter of Native American scenes in Taos, New Mexico.

The daughter of one of Queen Victoria's closest advisors, Brett took art and dance lessons with royalty as a child and eventually went on to study painting at the Slade School of Art and University College, London. A bon vivant and socialite, her paintings were generally portraits of friends and acquaintances, amongst them the playwright George Bernard Shaw and the novelists Virginia Woolf and D.H. Lawrence. The Lawrences were dear friends of Brett and, when they accepted an invitation by Mabel Dodge Luhan to visit her in Taos, New Mexico, she came along. 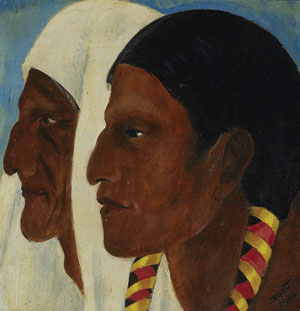 Brett first arrived in Taos in 1924. She became inseparable from Frieda Lawrence and Mabel Dodge Luhan to the extent that they were known as "The Three Fates" in Taos social circles. Brett began to paint the native peoples of Taos, whom she found to be more peaceful and sedate than the warrior characters on horseback that she had seen as a girl in Buffalo Bill's Wild West Show in London. Her paintings took on a primitive air, depicting the Indians as a simple and spiritual culture.

When D.H. and Frieda left, Dorothy stayed. In 1938 she became a U.S. citizen. Deaf for the majority of her life, she carried an ornate brass ear trumpet named "Tobey" wherever she went. Dorothy Brett died in 1977. Her work is in the permanent collection of the Museum of New Mexico and the Buffalo Museum of Science.