Man’s best friend is also cowboy’s best friend in Dogs: Faithful and True, a new exhibition at the Eiteljorg Museum of American Indians and Western Art in Indianapolis. The dog-themed show, which features historic and contemporary Western artwork depicting dogs in a variety of roles, draws on people's natural affection for canines across a range of breeds. it's open now at the Indiana museum.

“Most people have a great sentimentality for dogs. Dogs are such an approachable subject that people show a lot of love to the art because they are so empathetic of the subject matter,” says curator Jennifer Complo McNutt. “What’s great about the show is that dogs are seen in a variety of images, a real broad combination of works that we break down into dogs as workers, dogs as companions and dogs as heroes... We’re excited about this exhibition because everyone is familiar with dogs, and we think it will bring in a new audience to the museum and its galleries.” 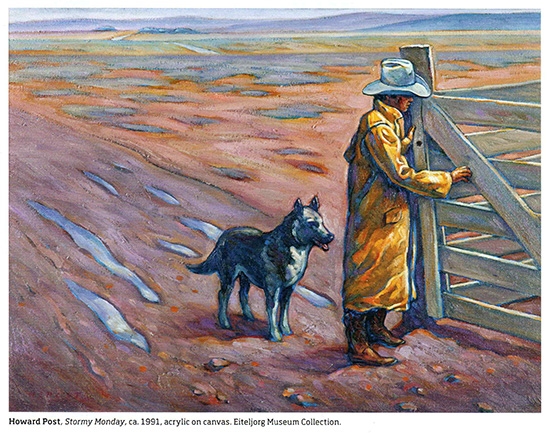 McNutt- who trains dogs outside of her work at the- museum, teased the show in September 2016 during the Quest for the West exhibition when she brought two of her own dogs to be used as live models for a drawing demonstration by Quest artists, including Jay Moore, C. Michael Dudash, John Fawcett and others. As the Labradors lay still in a circle of onlookers and their sketchpads, some of the artists could be heard humorously grumbling as their two subjects lifted their heads, rearranged their bodies and shifted positions to the consternation of the artists drawing them. ”This is why I don't paint dogs,” one landscape painter said. It was a joke, but it illustrated a larger point: dogs can be difficult subjects. They move, sometimes fast. They can be skittish. And they are intensely curious creatures. They can also be fiercely loyal, which is conveyed in many of the pieces in the Eiteljorg show.

Works in the exhibition include William R. Leigh's action—filled Grizzly at Bay, depicting an attacking bear looming over an injured man who is just out of reach of his rifle. Around the bear are four barking’ dogs, each rendered in ferocious detail as they attempt to rescue the mauled man. Leigh did several versions of this famous scene, including one version that is set in a forest and features four additional dogs that is owned by the Gilcrease Museum in Oklahoma. Another image showing the ferocity of dogs is Bob Kuhn’s Reverberations, a tall and narrow piece showing three hunting dogs that have “treed” a mountain lion up a pillar of rock. The composition of the image is spectacular, with lines, details and shapes pointing upward throughout the painting—only the mountain lion's head and tail point down into the action. “There’s a great sense of movement in this one. And I love the energy the dogs have,” McNutt says. “They have this heroic nature to them, this ability to forget about themselves to take on the job at hand.”

Two noteworthy works are William Herbert “Buck” Dunton’s Sheep Herder, New Mexico, and Charles M. Russell's bronze The Malamute, which he sculpted in 1900 but was cast after his death in 1958. The Dunton is important to the exhibition because it was personally collected by Harrison Eiteljorg, the museum's namesake. 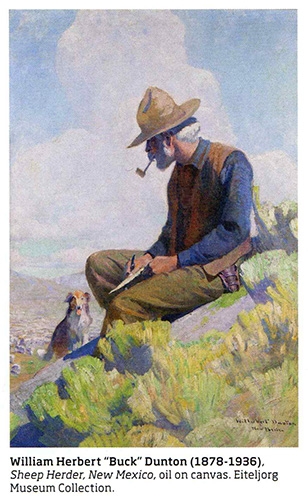 In addition to the artwork, the museum will be hosting a variety of additional dog themed programming, including outdoor events and drawing workshops. On April 7, an Iditarod musher will give a presentation (with an additional presentation on April 8) followed by a curator’s chat titled ”The Artful Dog.” Another curator chat, this one titled ”Dogs on the Move: By Sled and Travois,” will be held May 5. Additional events include a dog trivia night, a discussion with veterinarians and, on July 8, an art demonstration by Veryl Goodnight.