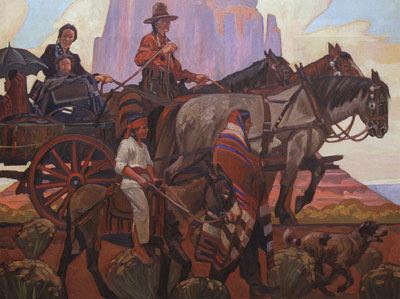 Dennis Ziemienski, Pilgrimage to the Post, oil on canvas, 36"x 48"

Dennis Ziemienski enjoys switching between the genres of landscape, cityscape, and figurative. Known for his virtuosity, Ziemienski’s compositions remain constant with imagery of a bygone era that isn’t the Old West or New West but in between.

Ziemienski’s latest paintings are set in Santa Fe and northern New Mexico and include more figures, specifically figures in blankets and on horseback, and moralistic imagery with a more subtle feel of the 1930s and ‘40s for which he is known.

“I’m using more figures and playing with light. In order to give depth to a picture, some of the objects or figures are in shadow and some in light. It gives a very interesting if not playful way of making a strong composition,” says Ziemienski. “That’s my ultimate goal, to be very strong compositionally.” 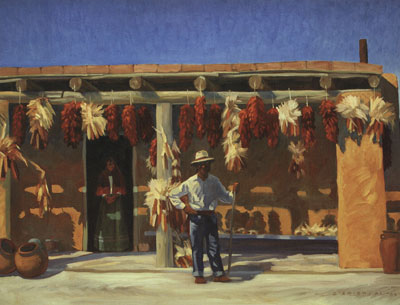 Based on this new theme, the piece titled Pilgrimage to the Post illustrates best Ziemienski’s strong sense of composition and design.

“The figures are mostly in shadows but there’s still an iconic view of these people even though we don’t see everything. That’s the new direction I’m taking in most of my work,” he says. “In that painting is a moralistic style that I’ve always enjoyed doing and I’d like to do more of.”

It’s not uncommon for Ziemienski to add figures into a landscape to emphasize scale, as seen in Monumental Shapes. He continues to deal with fairly symbolic scenes as evident in Warmth, a single Native American figure wrapped in a blanket.

“I tend to compose pictures that have a strong singular image, a figure on a horse or the grand architecture of the earth that’s found in the West. In contrast to that iconic image making, I want to do the same thing with several figures and it’s really experimentation. The various figures, objects and architecture will be pulled together to make a strong composition,” adds Ziemienski. 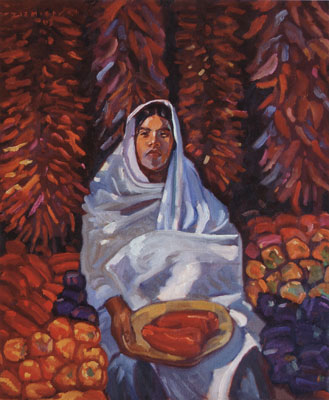 Medicine Man Gallery will spotlight Ziemienski’s new body of work throughout May at its Santa Fe showroom. “This last summer I went to The Albuquerque Museum of Art and History and saw the Ernest Blumenschein exhibit and was inspired by his work. I’m always being inspired by my favorites,” says Ziemienski.

His list of favorites also includes Maynard Dixon, Frank Brangwyn and N.C. Wyeth, who was an illustrator like Ziemienski. He is particularly inspired by Brangwyn’s ability to set up a composition that had several layers to it; the foreground in shadow, the mid-ground in light, and the background in shadow again, giving every character a sense of presence.

“His work was so strong with its lights and darks. I’m impressed by that and hope to try and do that. Pilgrimage to the Post illustrates this effort and experimentation,” says Ziemienski. “I want (collectors) to notice how I design and compose a picture. They’ll realize this work, for most part, is one of my best.” 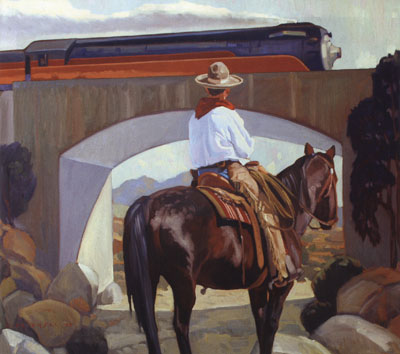 Dennis Ziemienski, The Sunset Over the Arroyo, oil on linen, 36" x 42"