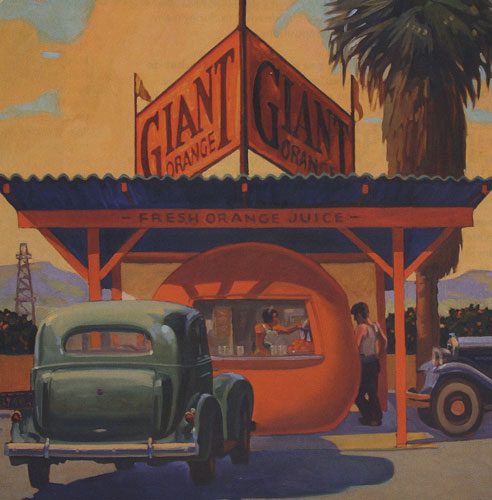 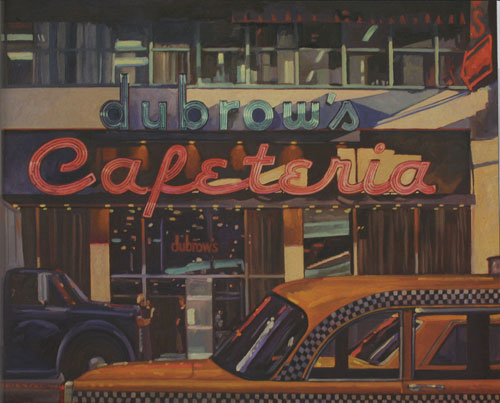 Dennis Ziemienski remembers the days when his family traveled regularly along U.S. Highway 99, heading from their home in the San Francisco area toward Fresno to visit his cousins. The road to Fresno was festooned with roadside motels and neon signs, each side of the highway peppered with mom-and-pop places where travelers could eat, sleep, and gas up their automobiles. “There were buildings in the shape of giant oranges and lemons. And there were neon signs of diving women,” he recalls. “Now all you have is Starbucks and Denny’s. In the old days everything was very individual. Almost all of that is gone. I guess in my paintings I am bringing that era back to life.”

Indeed, Ziemienski is doing his part to keep memories of bygone days alive and flourishing, whether it’s the 1950s of his youth or decades earlier. “I would rather paint a 1928 Packard than an SUV,” he explains. “I prefer painting Native Americans wrapped in blankets or people wearing clothing from the ‘30s and ‘40s than modern-day people in t-shirts, sweatpants and baseball caps.”

As this story was going to press, Ziemienski was preparing for several gallery shows, including one in September titled Old U.S. 99 at Knowlton Gallery in Lodi, CA. The presentation will tell the story of what Ziemienski describes as a “once-proud route through the center of the Golden State – a route loaded with architectural and cultural eye candy.”

Collectors familiar with his paintings know that Ziemienski is fond of telling stories. He attributes his penchant for narrative in part to his days as a successful commercial artist in New York City, where he illustrated stories for Fortune, Reader’s Digest, Redbook, Rolling Stone, and National Lampoon magazines. In his illustration heyday, the award-winning artist also designed covers for books such as Elmore Leonard’s Freaky Deaky and Armistead Maupin’s Tales of the City.

Like many artists, Ziemienski says his career began as a youngster, when he drew constantly. But his path to an art career took some detours along the way. During his senior year in high school, the Vietnam War was raging. His father, a nuclear engineer, suggested he join the Navy Reserve. “I became a weekend warrior,” Ziemienski says. It would be several years before he had to go on active duty, so he began attending classes at San Jose State University, studying commercial art and graphic design.

Eventually, as part of his six-year Navy commitment, Ziemienski spent two years overseas, most of the time on a submarine going to places like Japan, Taiwan, Singapore and Vietnam. He recalls that at one point the sub he was on stayed submerged for 72 days without surfacing, mainly spying on the Russians, he says. During this time he also became the ship’s resident artist and drew what he saw through the periscope. 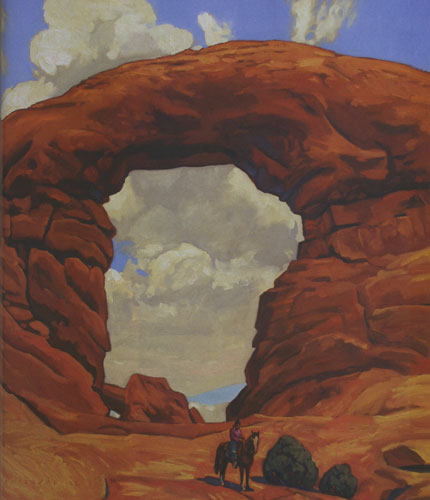 After his stint in illustration in New York, Ziemienski returned to his native Bay Area in 1990 and began focusing on a fine-art career. Today, he lives with his wife, Anne, who is a mosaic artist and designer, in the wine country north of San Francisco in a Sicilian-style farmhouse that he designed.

Mark Sublette, owner of Medicine Man Gallery in Santa Fe, NM, and Tucson, AZ, has represented the artist for the past five years and says that what drew him to  Ziemienski’s paintings were his strong compositions and his ability to create scenes that tell a story. Sublette says he was also attracted to the time period Ziemienski portrays.

“He’s capturing the West, but not the cowboys and Indians era. Rather, he’s capturing the art deco and the Fred Harvey era,” Sublette says. “It’s the West with the invention of transportation. The West that Dennis paints is the transition from the Old West, when everything was changing. It was a time when there was a car driving next to a horse.”

Ziemienski likes to refer to the time period in his oil paintings as “the Old West after the Old West.” Historians might call it the time when railroads, automobiles, motels and rodeos began to dominate the western scene at the beginning of the 20th century. While earlier cowboy and Indian scenes are quite common, Ziemienski’s era of choice hasn’t been as well documented. “You don’t see a lot of paintings of cowboys driving Model T Fords, but they did – and right alongside their horses,” he explains.

It comes as no surprise that the artist has a passion for history as well as art. He often heads to the library, the Internet, and local historical societies to study up on his subject matter, as he did for a series of paintings on the city of Pasadena. Eventually, he honed in on the former orange groves and growers that once dotted the area. “They were all gone by the 1930s,” Ziemienski says. “Houses came in, and the orange groves moved east to Riverside. And now a lot of those have disappeared, too.”

While Ziemienski was working on the series (for Michael Hollis Fine Art in South Pasadena), a friend’s daughter was visiting at his farmhouse, and he watched her thoroughly relish eating an orange. He asked if she would consider posing for him. The result: Girl with Oranges. In another piece in the series, the artist rounded up his wife and some neighbors to simulate a turn-of-the-century orange harvest.

In Rodeo Belle he found inspiration in a circa 1938 photograph of a perky, gunslinging cowgirl. The photo, which hung on the wall of a Sonoma café he visited, referenced a rodeo that used to take place in the wine country town. “There were a lot of fun things at the rodeo, like horses jumping over cars,” Ziemienski says. “They would get pretty girls to promote it. It stopped around 1952.” 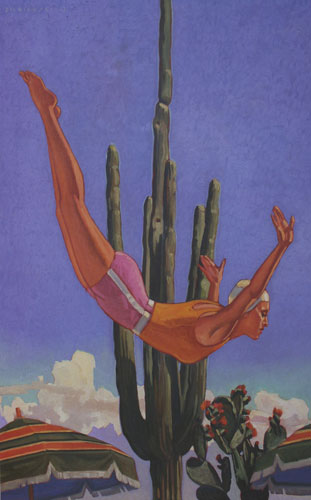 Much of his imagery portrays the period when the people from other parts of the country started traveling out west on vacations. “Companies like the Fred Harvey Company brought in tourists and took them on tours of pueblos and the countryside,” Ziemienski explains. All of this gradually led to the opening of a number of resorts, spas, and dude ranches in New Mexico, Arizona and California. In Desert Plunge, Ziemienski captures the era with a girl in a swim cap and bathing suit springing off of a diving board at what easily might be one of these desert getaways.

In paintings like Runningboard Sale, which depicts Native American women by the side of the road selling pottery, Ziemienski strikes a more provocative and somewhat sadder tone. He admits he wants viewers to think about the impact tourism had on Native American culture in the West. “Native Americans may have liked what they saw and started thinking things like, ‘We can get to the trading post in a Ford pick-up truck instead of a horse and wagon,’” he says. “Tourism altered their culture. Something was lost and something was gained.” 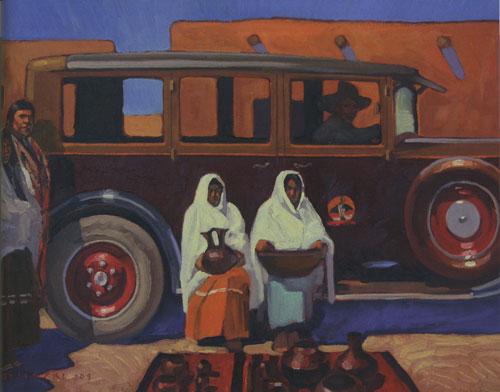 Ziemienski’s main goal, he says, is to offer viewers a chance to imagine “the way things might have looked in the past – to create a sense of history.” He can only speculate on why more artists haven’t chosen to capture this era. The abstract movement in art was beginning around 1920, and, with the exception of painters like Maynard Dixon and Ernest Blumenschein, many artists may have favored abstraction, he theorizes. And later, in the ‘50s and ‘60s, movements like pop art sprung up to command the attention of the art world.

But the lack of painterly interest in this transitional period of western history is fine with Ziemienski; he has found his niche and is quite content mining this unpopulated artistic terrain. “I’m always attracted to paintings that have something in them besides mountains and trees,” he says. “I like plein-air works, but I always figure there should be a horse or a figure or a train going over a bridge in them. In other words – a story. I hope that’s what people see in my paintings.”

Bonnie Gangelhoff is the senior editor at Southwest Art.