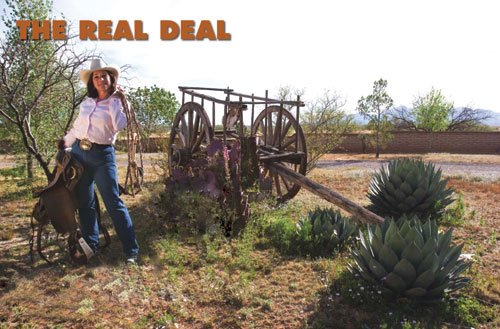 When she rides good horses and team ropes fractious steers she is poetry in motion. When she sculpts, on whatever scale, the results evoke admiration, reverence and, sometimes, tears. She is total commitment in everything she does. Meet Deborah Copenhaver-Fellows.

Deborah Copenhaver-Fellows adopts the pose of her sculpture, She Saddles Her Own Horse. The saddle she is holding will be the subject of her next sculpture, a tribute to her eighty-two year old father and hero. The saddle holds a special place in her family’s history—her father won it as the 1955 world champion, and her brother rode in the same saddle to win the 1975 world calf Roping championship.

Aficionados of Deborah Copenhaver-Fellows’ works are drawn to them because of the sheer truth in the pieces and the passion emanating from every sculpted mark. Whether she’s creating larger-than-life monuments or 13" bronzes depicting the Western lifestyle, her talent and dedication shine through. 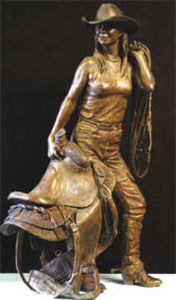 A National Cowgirl Hall of Fame nominee, Copenhaver Fellows is an anomaly—an outstanding Western horsewoman and fourth-generation cattle rancher who is a classically trained artist, having studied abroad in Italy, Greece, and France.

“When I was little, my mom and dad wouldn’t let me go riding on a saddle when they were gone because they were afraid I would come dragging in hung up on the stirrups.”

When left to her own devices, Deborah amused herself by chasing coyotes and jumping her horse over every obstacle in the pursuit. She became an accomplished barrel racer and later turned her hand to competitive roping. 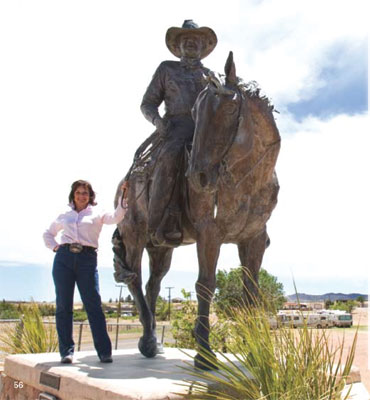 Deborah's monumental work, A Tribute to Ranching, was erected at the Santa Cruz County Fair and Rodeo Grounds in Sonoita, Arizona in 2001. When Deborah started out as an artist, she entered competitions for public monuments. In 1990, she won the competition to sculpt the Washington State Korean Memorial for the State Capitol grounds. Another monumnet dear to her heart is the inland Northwest Vietnam Veterans Memorial in Riverfront Park, Spokane Washington.

One commission let to another, including commissions from the University of Texas, the State of Montana and James Irvine in Los Angeles. Today, Deborah Copenhaver-Fellows' work is recognized throughout the USA, and can be seen in the Reagan White House Collection, and the Hall of Champions in Colorado Springs, Colorado. Former House of Representatives Speaker Tom Foley, displayed one of her pieces in his the US Capitol building office. 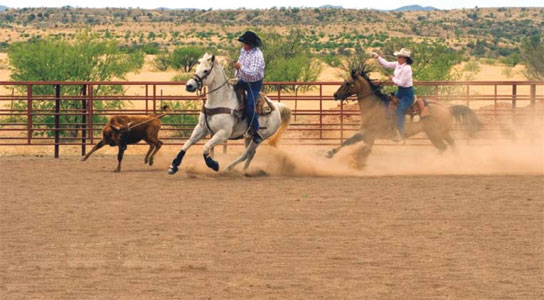 “I was raised free as the March wind. There was no fear. I think the ability to keep that lack of fear comes in your genes. We breed horses here, and I can see it in the lines of one mare as opposed to another one.”

If, indeed, fearlessness is in the genes, it is no surprise that Copenhaver- Fellows remains unafraid today—her father was a world champion saddle bronc rider and her brother was a world champion calf roper. On every occasion possible, she and husband Fred Fellows (respected artist and Cowboy Artists of America two-time president,) compete in team roping events together.

With the same free spirit she exhibits in her horsemanship, Copenhaver-Fellows continues to push boundaries and explore her craft.

“My husband once told me, ‘When you get to the point when you’re technically capable you’ll find out that art is about ideas.’”

Copenhaver Fellows continues, “Aren’t we dead when our style stops growing? You have to extend yourself to create great art. It can’t be just that you’re looking for the money. After you hit a certain level you feel the responsibility is heavier because you have to show that you’re growing.” 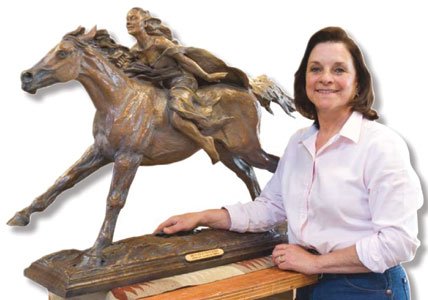 Copenhaver Fellows’ newest piece is a bronze entitled, She Flies Without Wings. It was inspired by a photograph her daughter took of her jumping her horse over a huge log.

"She Flies Without Wings is a departure for me. It’s a little more ethereal.  It’s the dream. There’s something about a horse running that just gets me. It’s part of a lot of things in me.

“Tears always rise in my eyes when I see horses perform. They arouse a passion in me that fills my imagination and touches my soul. Between a woman and a horse, the elements of danger, fear, and excitement give rise to the feminine spirit of unbridled independence.” 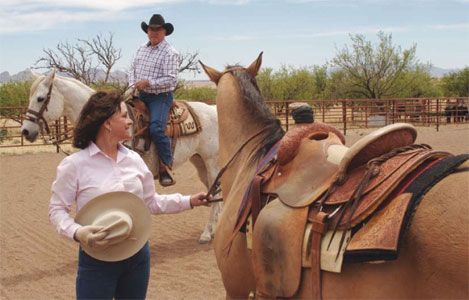 Copenhaver-Fellows often chooses women as her subjects. “I want the woman in Western Art to be conveyed as a confident, capable, feminine, graceful image. I don't think it's being done. What’s really important to me is to convey that you can have the attitude and the confidence and you don’t have to lose your femininity to do it. That makes it even sweeter.  I can do it and be the woman that I am. “In my work I have an awful lot of women come up to me and say ‘you capture an attitude and a feminine sensibility that I like.'"

In other words, although she is far too humble to recognize it, Copenhaver-Fellows imbues her figures with some of her own strength and grace. It is no surprise, then, that savvy collectors of Western sculpture are drawn to her work. 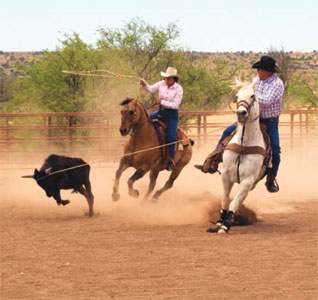 Not all of her powerful pieces are of the smaller variety. Copenhaver-Fellows has created a number of larger-than-life monuments, including several memorials to fallen soldiers. One monument in particular has retained personal significance for her. It is the Inland Northwest Vietnam Veterans Memorial in Riverfront Park, Spokane, Washington.

As Copenhaver Fellows tells the story, “The neighbor kid that I grew up with was drafted and went to Vietnam. He was flying helicopters. He wrote me a letter saying, ‘We’re out there and we’re not covered,’ and I was going to write him a letter back. He died in combat before I could write it. I was in college at the time. Then I got a chance to do that monument, and I put the letter I was going to write in the figure’s hand.” 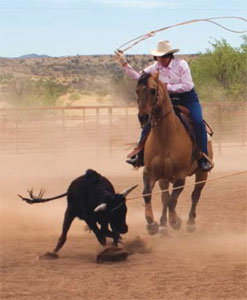 It is easy, still today, to see the emotional significance of that gesture to Copenhaver Fellows. She explains that as she put the finishing touches on that monument, “I was working by myself, late at night in the studio. It’s funny. The moment that it’s over it’s an alone time. I walked out of the studio. I walked back in, flipped the light on, and I said, ‘I can’t believe I’m the one who did that.’ I was a conduit for something greater than I am. That’s probably the definition of great art—something that’s much greater than the artist. It’s the most humbling . . . when it’s the real deal, you’re humbled by it.”

Copenhaver-Fellows continues to create pieces that speak to her. Her next planned bronze will be a tribute to her eighty-two-year-old father and hero. “He and I were looking at some videos of him riding at the first National Finals Rodeo in Dallas in 1959 and he said, ‘Oh, to do it all over again.’ I’m going to sculpt that. I’ve already taken some photographs of an older guy sitting cleaning his saddle. He’s spent a lifetime on it and he's polishing it." 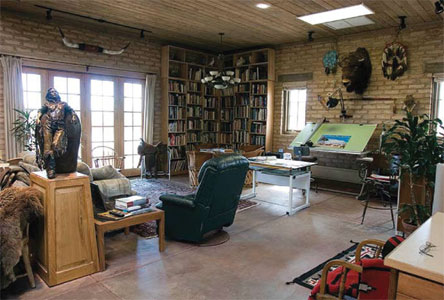 Deborah Copenhaver-Fellows' studio she shares with her husband. In the background is her father's saddle.

Copenhaver- Fellows has that very saddle she’ll be sculpting in her studio. It holds a special place in her family’s history—her father won it as the 1955 World Champion, and her brother rode in the same saddle to win the 1975 World Calf Roping Championship.

In fact,  the comfortable home that Deborah and Fred Fellows share on many acres in southern Arizona is chock full with their personal and family histories. Set on a vast working-ranch spread, with a separate studio, a second studio suitable for large subject work, their horses, the foals, and some steers, it’s everything Copenhaver Fellows says she could want.

“With the mares out here and the babies, that first week with those babies, I can temper everything that they’re going to do for the rest of their lives. What I’m doing with those babies is so strong. The same is true for me. The truth is that I was imprinted with a love for all of this, the horses, the life. I couldn’t leave it if I tried.” 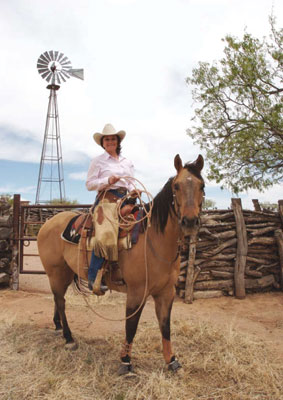 In terms of her work, Copenhaver-Fellows is far from finished. She continues to strive to be the best she can be. “And I’m not there yet, but it’s coming.  I’m not arrogant enough to think that I’m there yet, but I’m on my way.”

There’s no question that whatever Copenhaver-Fellows sets her mind to, she will accomplish, with style, passion, and class.