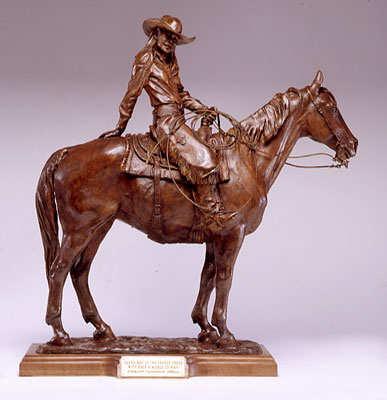 Deborah Copenhaver-Fellows is a fourth-generation cattle rancher from northern Idaho, as well as an accomplished horsewoman, barrel racer, competitive roper, and National Cowgirl Hall of Fame nominee. Also a classically trained artist, she has managed to translate her impressive Western pedigree into molten metal. Inspired by her personal experiences and the special relationship between a woman and a horse, Copenhaver-Fellows' sculptures often emphasize the conflicting elements of fear and excitement, reliance and independence. Several of her sculptures feature young women saddling their own horses, branding their own cattle, and carrying their children on horseback. Her work conveys a unique feminine sensibility, one that celebrates confidence and capability.

Copenhaver-Fellows' smaller sculptures are featured in a number of distinguished private collections, including those of former Speaker of the House Tom Foley and President Ronald Reagan. She has also designed on a much larger scale, including the Washington State Korean War Memorial and the Montana Vietnam Veterans Memorial. Recently elected for lifetime membership in the National Sculpture Society, Copenhaver-Fellows also attained the top sales and Best of Show award at the Heritage of the West Art Show at the National Cowgirl Museum and Hall of fame, and is the only sculptor and woman invited to premier at the 2009 Prix de West Art Show at the National Cowboy & Western Heritage Museum in Oklahoma City.