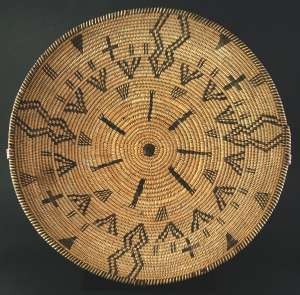 Basketry is the art of weaving pliable vegetable fibers, like bark, straw, wood, or grass, into storage vessels through a variety of techniques.

Because Native American artists gather, cut, peel, then prepare their raw materials before weaving, a single basket may take up to six months to complete. Since few are willing to devote so much time to this demanding art, most Apache baskets currently on the market date from the late 1800s through the 1930s. Many are acquired from original owners or their families. "Apache women have been the primary individuals involved in making baskets, "explains Dr. Mark Sublette, expert in Apache baskets and owner of Medicine Man Gallery for Antique Trader. "There are still some weavers active today, but for the most part, most Native American basketry production is a dying art." 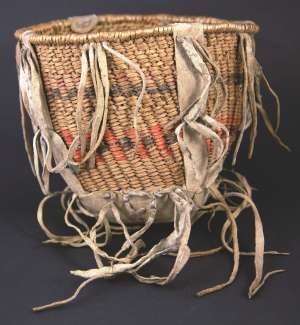 Due to their increasing rarity, Apache baskets have risen appreciably in value over the past decades. They are also prized for their meticulous workmanship, three peeled willow-shoot rods coiled together then sewn to the previous row, producing characteristically tight, stiff, sturdy results. Their age too, from newly-peeled white willow to patinated yellowish by exposure to sun and air, also determines their worth.

Apache baskets often boast designs of dark brown to black geometric figures like checkered triangles, rectangles, and elongated diamonds combined with petaled rosettes, animal, or humanoid forms, all produced from devil's claw. According to Sublette, "Devil's claw is a nasty plant which has ends with sharp thorn-like projections and a very tough outer skin. Weavers produced individual devil's claw strips by running the plant through their teeth. Over time," he reflects, "this led to grooves in their teeth."

Overall negative-designed Apache baskets, also produced with devil's claw, are highly desirable. So are polychrome baskets, ones featuring deep red decorative elements produced with Yucca root, another plant prevalent in the Southwest. Yet, cautions Sublette, while pictorial elements like dogs, horses, people, names or anthropomorphic images always lead to premium prices, "the final value of an Apache basket always comes down to one question: Was the artist who designed and shaped it talented?" 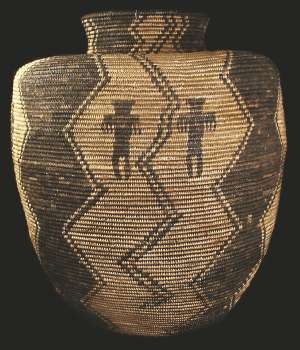 Apache bowls are found in a variety of forms and sizes. Their value reflects their condition and stitch count, as well as the detail and design of their pictorials.

Apache women wove large, utilitarian sumac or willow shoot burden baskets, backpacks of their day, to tote sticks of firewood, clothing, berries, or roots. To finish them off, they added long, dangling deer or cow hide tassels tipped with chimes. Tinkling tassels, besides being aesthetically pleasing, were practical. They not only kept cougars and snakes, which are prevalent in Apache homelands, at bay, they also warned sons-in-law as their mothers-in-law approached, following the age-old Apache tradition of keeping distance between generations. Since burden baskets were in constant use, only those with original rawhide, yellow or green tin cones, and tassels intact command premium prices. Some of these are worth up to $100,000. 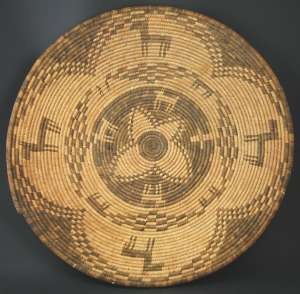 Apache pictorial tray with dogs and horses, circa 1900, 20 inches in diameter

The largest Apache baskets, ollas, traditionally used for storing grain, are also the most valuable. Their shape, taller than wide, with a rounded body, and rimmed with a gaping mouth, defines them. A great olla, large, symmetrical, featuring polychrome pictorials, and in good condition, may command up to $100,000.

"Apache baskets may seem expensive, "explains Dr. Sublette, "Until you compare them with other art forms. True, a great Apache tray might bring $50,000. A great Apache olla that took an artist with 30 years of experience to make and is a hundred years old might bring $100,000. But a painting that takes a few days to complete sometimes commands a million dollars. So in comparison, Apache baskets seem inexpensive to me."

Melody Amsel-Arieli is a freelance writer and frequent contributor to Antique Trader. She is the author of "Between Galicia and Hungary: The Jews of Stropkov.  She lives in Israel.