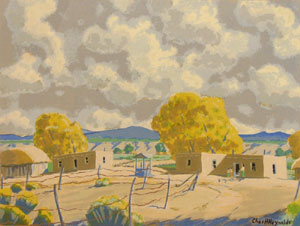 Reynolds was born in Kiowa, Oklahoma and attended the University of Oklahoma and Tulsa University.  He worked as a bookkeeper, eventually become chief clerk to the Treasurer of Skelly Oil Company, and later became secretary and treasurer of an engineering firm.

Reynolds started painting on his own in 1925.  He studied briefly at the Art Institute of Chicago and the Julian Academy in Paris, but was mostly self-taught.  He painted realistic landscapes in oil and watercolor, drawing inspiration from Taos painters such as O.E. Berninghaus and J.H. Sharp.

Reynolds began visiting and painting New Mexico in 1932 and moved permanently to Taos in 1946.  He later opened an art gallery there, selling his own and others' work.  He exhibited extensively in Oklahoma, Texas, New Mexico and Arizona, including one-man shows at the Philbrook Museum in Tulsa and the Museum of Fine Art in Santa Fe.