Husband and wife silversmiths Carolyn and Wilson Begay have been making jewelry since 1969. They are from famous jewelry making families. Carolyn’s parents, Angela and Allen Chee worked for the well-known trader C.G. Wallace in Zuni, NM. Wilson also worked for many years at the renowned Kirk Brothers trading Company, located in Gallup, NM.

While John Adair, author of “Navajo and Pueblo Silversmiths” was conducting a survey of native silversmiths for the Smithsonian, in the 1930’s, Luke Begay, Wilson’s grandfather showed Adair his skills with the tufa casting process.

The Begays first worked for famous trader Tobe Turpin in Gallup, NM. Carolyn had once remarked that silver was only $1.25 an ounce when she began silversmithing. Carolyn and Wilson work together to create their pieces. Carolyn does the finishing work and stone setting, while Wilson builds the foundations of the pieces and does the casting. The Begays have three daughters who are following in the family tradition of silversmithing.

Wilson has won some of the highest honors at the Gallup Inter-tribal Ceremonial. His traditional Navajo designs are hallmarked with a Navajo hat, having his initials below it. His work is considered a “must-have” for serious jewelry collectors. 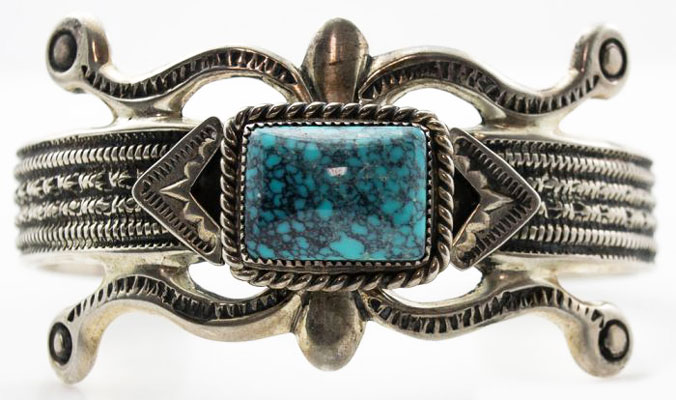