Sellers was from Utah, but he had been a part of the Seaside Art Gallery, entering the International Miniature Art show for the past 10 years. He won many awards, including best in show.

“Unfortunately, I never got the pleasure of meeting him in person, but I enjoyed his art and the conversation when communicating with him,” said Melanie Smith, owner of Seaside Art Gallery. “I remember one of his pieces that looked like bunch of paintings stacked outside a building and it looked like he just got kicked out or evicted.”

Hie show attracted artists from all over the world. Most were from the U.S., some from Russia, Israel, Germany, France, Canada, Australia, South Africa More than 200 artists participated in, entering 482 pieces in different mediums.

I asked Smith how she finds artists from all over the globe and she said when the show first started they used to advertise. Not anymore.

“The same artists that are members of prestigious National and International Miniature Art Society enter the show ever}' year and they help spread the word,” Smith said.

The winners were announced during a lively reception catered by Argyle’s Restaurant on May 28.

Miniature artist Beverly Abbot from Virginia judged the show and shared her thoughts about the winning pieces.

“The show has been a joy to judge,” she said. “There are many wonderful pieces to exclaim over. When judging a miniature painting or sculpture, besides the usual qualities of composition, etc., 1look for detail and a refinement of technique and emotion. 'Hie piece should be able to be enlarged and still hold its quality.” 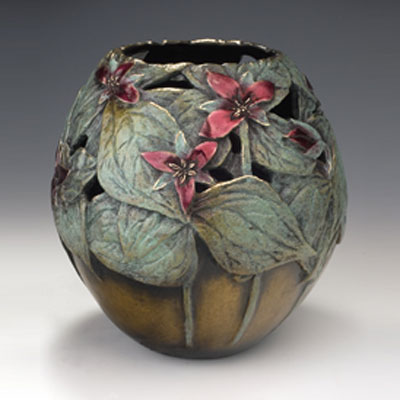 “This is a gracefully shaped vessel, and the patinas used complement each other well. When the container is turned over there are three ants carved into the metal, adding an extra touch,” Abbot said.

Smith and Abbot said that it is unusual for a sculpture to win the highest award in the show. Traditionally, paintings in acrylics, watercolor and oil win top awards.