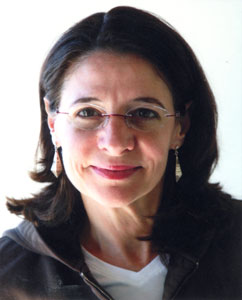 In late 2000, after leaving her teaching career in art, Carol Alleman expanded her artistic visions in clay to include the lost wax casting in bronze. Embracing the alchemistic nature of this ageless material and highly crafted process, she created her first bronze vessel, Miracles. Thus began the mystical and organic Tree of Life and Nature Vessel Series. This transition mirrored, to her, the longevity and ever changing character of nature as the bronze material holds inherent longevity and the patinas are ever, if softly, changing from season to season. Her signature, museum-quality work encompasses highly evolved, intricate patinas and vast cut-out areas providing dramatic displays of light - within the ancient, feminine vessel form. The infinity of the circular form, while open to receive and pour forth is a powerful essence for her.  Companion Writings accompany each bronze - sharing the inspiration of each piece as she received it while typically including a poem.  She hopes and expects each piece to continue to speak to its caretaker, with a Voice changing within each new season of their life. Combining the written word with her growing forest of bronze vessels, Carol additionally inspires audiences through her presentations and poetry readings.

Born in rural Pennsylvania, Carol Alleman obtained her degree in Art Education from the Pennsylvania State University (PA/USA) and continued graduate studies at the Lancaster Theological Seminary (PA/USA). Most recently, she has completed studies with various contemporary artists at the Scottsdale Artist School, Scottsdale, Arizona. She is an elected Signature Member of American Women Artists, a member of Allied Artists of America and a member of Artists for Conservation. Her work has been reviewed as a featured artist by Southwest Art, Phoenix Home and Garden and Western Art & Architecture. She has completed numerous commissions, exhibits widely across North America including numerous museums and has earned awards in many juried exhibitions, while appreciating an international collector base. Her work is in the permanent collection of The Tucson Museum of Art. 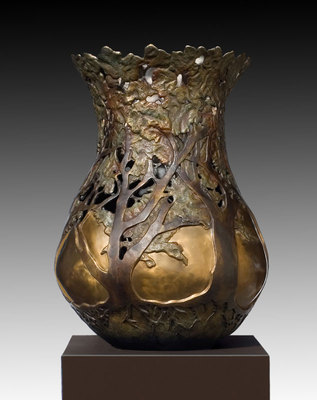 The intertwining dance - of nature, vessel, and the spiritual realms - continues to prevail in my work. Qualities of the ancient vessel form mirror my essence of living and creating. The circular form is powerful in its representation of the never-ending journey of eternity. The feminine vessel energies illuminate a willingness to receive (remaining open), a penchant to nourish (embrace and enrich), and the intention to renew the cycle through sharing (pouring forth and giving birth). The endlessly inspiring vessel qualities, coupled with my deep appreciation for the immense wisdom and beauty of nature, continue to be fertile seeds for the Tree of Life Series. Alluring and beautifully hued wildflowers of the Nature Series expand the body of work with a captivating and distinctively brilliant palette. Organic and mystical, each of the vessels impart an ethereal quality. 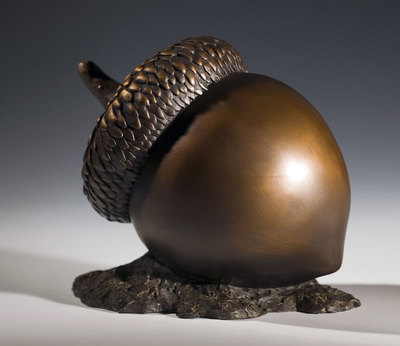 Author Ted Andrews, in Animal-Speak, suggests: "Every flower blossoms with reminders to be creative, and every tree whispers with its rustling leaves the secrets of life." Trees and flowers, nature and all Her elements indeed seem to whisper to me incessantly as I sculpt and write. Their language is mystical and magical, apparent and elusive, evocative and reassuring. Seemingly common elements and threads weave themselves together through my hands and words into amazingly poignant and often cryptic expressions. Frequently, I am amazed when looking at a finished piece, as if to look over my shoulder and say, ‘Who did that?' I feel both humbled and honored knowing I was there, my hand following something much larger than myself. Again and again, I am blessed and inspired by the choir of guiding Voices throughout the process. The voices of the clay are the Voices of my inner guidance, holding a language I believe speaks to me and all of us at once. It is typically only after the vessel is completed that I am able to fully recognize and appreciate its full essence. The vessels evolve into treasures with a sensation of history and antiquity - rich in a tapestry of story and symbolism. Forms, creatures and numeric elements take on a sometimes cloaked or sometimes visible presence in my work, while continually weaving a mystical, symbolic thread. 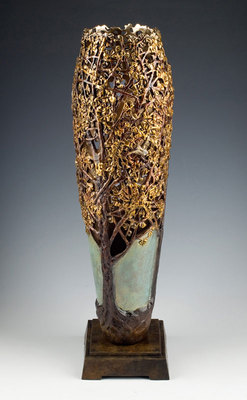 Although I obtained a formal education, as an artist, I consider myself largely self-taught. Each piece has its own process of evolving and I find myself learning, growing, and evolving in large and small ways along with each one.

Typically the smaller vessels are created as I hand-build a form in water-based clay, using slab and coiling techniques. I then refine the surfaces using a repertoire of tools often including a rice paddle, metal ribs and various stones. Always, I smooth and massage the interior with a slice of coconut shell, now worn to an intimately, silken surface. It is during this process of turning, scraping, and smoothing that I sit attentively listening to the vessel for guidance on its intentions - its voice. If I begin with an idea, I attempt to hold it most loosely, so as not to miss the opportunity to hear a deeper Wisdom. With the surface prepared, and having received a sense of the forms' intention, I begin sketching on the surface with a small needle tool. With sketching complete, I use a subtractive sculpting method: removing all the clay that will not contribute to the finished form. Concentrated attention is given to the balance and rhythm of light as it will flow through the vessel openings - the light, and its reflections, being a powerful Presence within each vessel. A final refining of the surface and cutout areas follows before allowing the piece to slowly dry before it is fired in a kiln or molded. Certain vessels, including all larger vessels, are created in an oil based clay and/or wax. While these most often require armature, the process is quite similar with three major exceptions: the clay is never fired, the negative spaces created by the cut-outs must be visualized rather than actually "cut through" and a combination of additive and subtractive sculpting techniques are used. 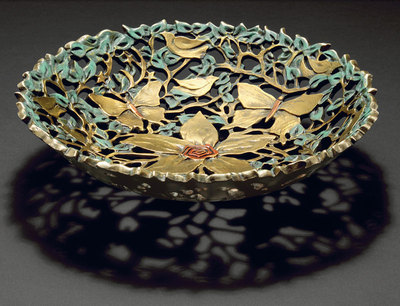 With the original vessel complete, the second lengthy process of lost-wax casting begins. The intricate cutouts and open interior surface demand a highly labor-intensive casting process. Each cutout area must be re-cut in each individual wax form, and then cleaned to a smooth and even surface. Unlike sculpture with an exterior surface alone, the open vessel form requires delicate attention to the surfaces on the interior, exterior and (because of the cut-out areas) often hundreds of spaces in between. Many, many talented hands (those whom I refer to as the wonderful "ghost artists") work with the pieces as they move through the precise stages at the foundry, insuring the highest level of craftsmanship in each step of the process. Unable to be physically present for each unique piece in each stage of the precise process, I work closely with these artisans, providing the necessary guidance to fulfill my visual and quality standards for each piece. A foundry proof (FP) is created, as the model/prototype, to assist the various artisans. Careful and repeated inspections are performed throughout the process prior to each piece receiving final approvals. 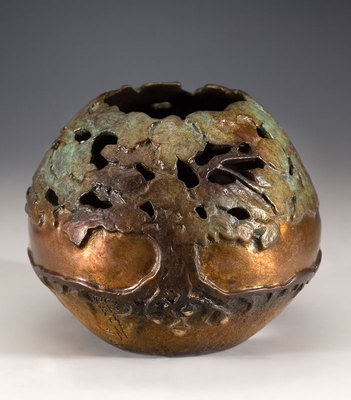 I remain immensely involved in the intricate patina and finishing processes. The final cast works receive a patina (chemicals most often applied hot, which oxidize the copper in the bronze and create color). These chemicals, in my work, are carefully applied in many layers to the cast bronze, helping to create my signature look of a multi-palette, organic (and often arboreal) patina with an old world luster and alluring detail. Though there are truly only three main water soluble chemicals in the art of patination, hundreds of variations are possible through application techniques, temperature, surface preparation, use of dyes, pigments and finishing choices. Maintaining even heating conditions with the often hundreds of cut-outs (in sharp contrast to the solid base) is a unique challenge. Dyes and/or pigments, at times, are added to enhance the tonal values without compromising the stability of the patina. Each piece is well sealed and protected with a lacquer and/or wax finish. My steadfast goal is museum quality work that is both evocative and inspiring. My commitment to achieving that goal is rewarded by the growing laudatory response of my collectors. I believe the work speaks with a deeply authentic voice: its initial capture is through the alluring visual qualities while simultaneously igniting a much deeper, soulful resonance. I feel both blessed and honored to share my creative visions while humbled by the gracious support and encouragement I continue to receive. 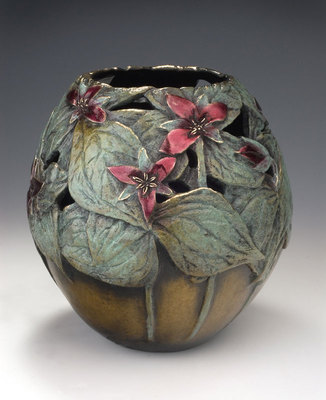 Companion writing accompanies most of my work. Once I have named the essence of the vessels' intention, I engage in lengthy research regarding the elements and images to be included. The writing unfolds gradually throughout the process. This prose is offered as a seed to ignite one's own contemplation while sharing the symbolic interpretation regarding the significance of the piece, to me, as it was born. It is my hope that the work will speak in many languages, changing from season to season in one's own life journey. I believe my writings to be messengers reaching far beyond the seed I receive while creating them. 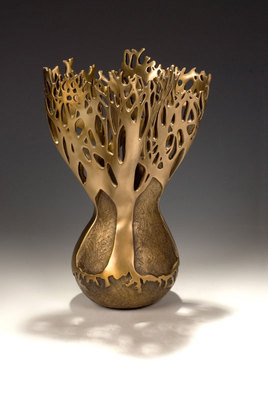 Each piece is authored with a mark resembling a very broad, cursive "Z", found beside my signature. This mark is an expression of the Spirit (Wind) always moving within and around us. It is my way of remembering and acknowledging I never create alone - perhaps more accurately, my mark of gratitude.

The ancient, organic vessel form has become my signature canvas. I welcome other forms, dimensions and presentations as they arise in their season and enrich my ground of creative exploration. Intricately developed, multi-colored patinas continue to both challenge and entice me as I explore and expand the limits of traditional patina in my major body of bronze sculpture.

Forms, creatures and numeric elements take on a sometimes cloaked and sometimes visible presence in my work weaving a mystical, symbolic thread. I am continuously inspired by the incessant, mystical voice of nature and the human spirit in all its colors. Coupled with the profoundly feminine qualities of the vessel form, nature enkindles me to give voice to the darker corners of the heart while igniting a glowing ray of hope and solidarity. Unceasingly, I hope to be an ever growing gardener of the soul through my intertwining visual and written expressions.

MANY pieces have never been submitted to any juried exhibitions (most high quality, juried exhibitions accept work completed/released within the past two years grossly limiting the number of qualifying pieces available for shipment and viewing  for the duration of the exhibit).  We recognize many collectors love to hear of awards confirming their choice of artwork to be “intelligent”. If it is useful to you, below is a condensed version of the artist resume for that purpose.

IN VINO VERITAS I